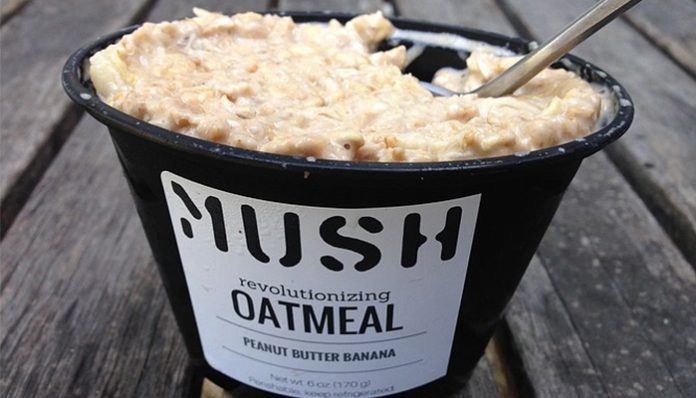 A healthy snack, Mush’s overnight oats are not only soaked in handcrafted mylk (that is, milk made from nuts such as almonds and cashews) but are loaded with fruits and other superfoods. Rich in protein and fibre, it also contains no added sugar, which makes it a fantastic choice for snacking. Today, a number of flavours are available including apple crisp, vanilla bean, blueberry, and dark cacao. Packaged in ready-to-eat pods, they’re the perfect choice for school, work, or travel.

The brainchild of Katherine Thomas and Ashley Thomas, Mush ultimately came to be through their mutual love of food. Realizing how difficult it was to fuel themselves with genuinely healthy food on a day-to-day basis, they began to explore different options. As one thing led to another, they found themselves focused on the topic of oats. After doing some research, they found out that there were no convenient options for healthy oats. Making a leap of faith, the pair eventually decided to make their own brand of oatmeal―Mush.

Diving into making the product, the pair experimented with different recipes individually before teaming up. In the end, it took them nearly two years to refine the perfect formula―one that utilizes the overnight soaking method. Preservatives and sugar-free, the on-the-go oatmeal breast fast soon began to make its way into the farmer’s markets in the San Diego area. To their surprise, it eventually became a big hit. Before long, they had managed to land a distribution deal with Whole Foods. With that, more individuals have been able to enjoy the healthy snack nationwide.

Fast forward to 2017―two years after their launch, and it was announced that the founders would be pitching their healthy oat snack on ABC’s Shark Tank. In the end, they were featured in the twelfth episode of the ninth season, which aired on November 26, 2017. 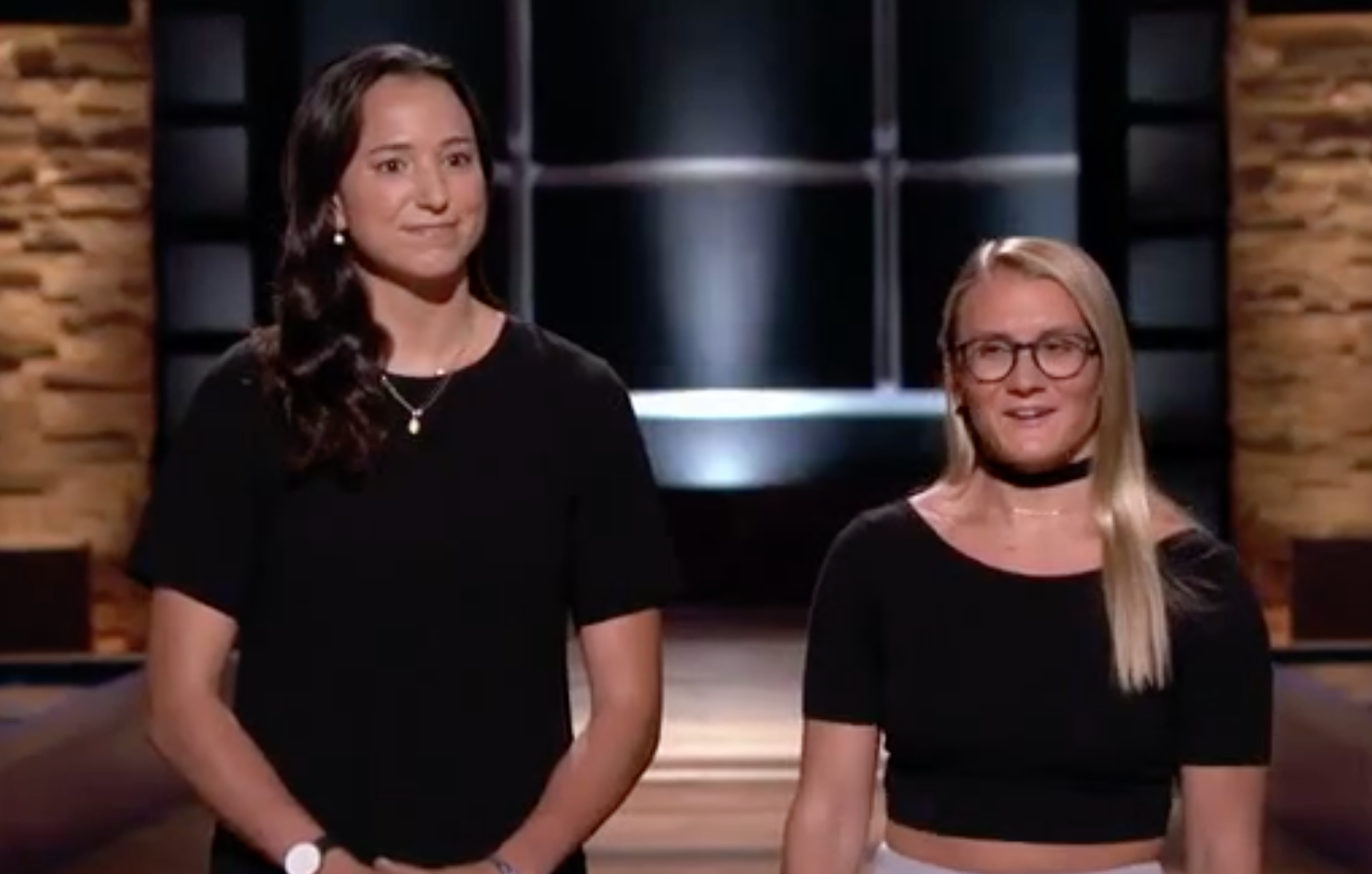 Walking into the tank, Ashley and Kat introduce themselves as the creator of Mush. On a mission to combat America’s love affair with sugar, they let the sharks know that they are seeking a $300,000 investment for 10% of their company.

Beginning their pitch, Kat shares that the two of them had found it genuinely difficult to find healthy and convenient foods, after going into the workforce. Continuing where she’d left off, Ashley points out that common snacks such as yogurt, cereal and protein bars are completely laden with sugar and “other processed garbage.” Holding up what appears to be a pod in her hand, Kat states that that is why they had created Mush.

The first all-natural, 100% ready-to-eat oatmeal, Kat reveals that the product itself is not actually cooked. Explaining, she says that it is instead cold-soaked in house-made almond or coconut milk, which results in a beautiful consistency that is similar to pudding. While it’s just as easy to digest as traditional oatmeal, she highlights the fact that it is packed with much more nutrients―as they haven’t been cooked off.

Carrying on with their pitch, Ashley states that Mush is also dairy-free, protein-rich, high in fiber and served conveniently cold in ready-to-eat pods. Demonstrating the “grab-and-go convenience”, she pops off the lid to show the sharks its contents, which includes a little spoon. “Much more than a healthy, convenient oatmeal,” Kat adds that it is fuel for the body, and fuel for a revolution in the food industry. 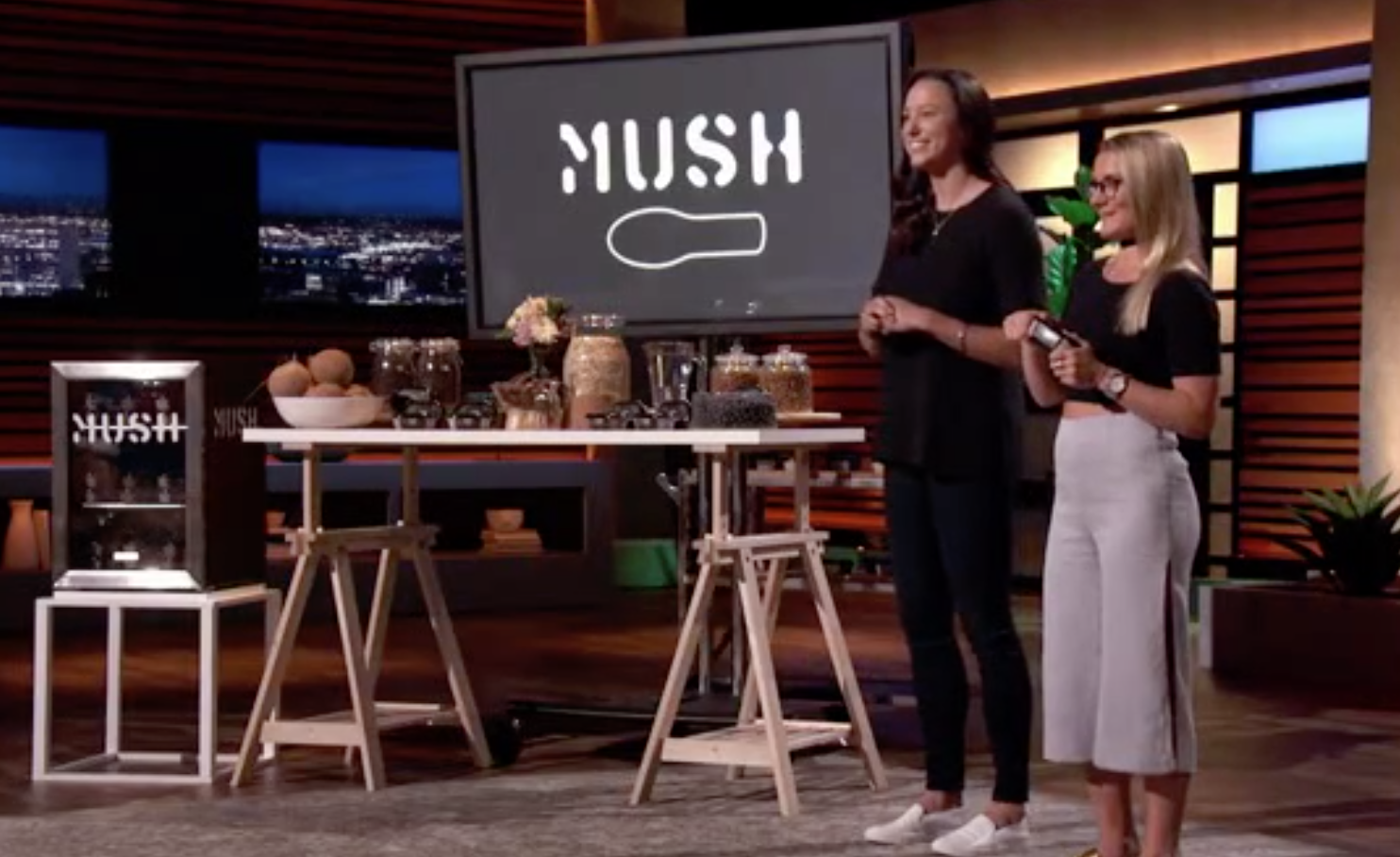 Having completed their pitch, the two founders go on to pass out a tray of samples to each of the sharks. Starting from right to left, she explains that the first pod is vanilla bean, which is the original flavour. A rolled oat that is soaked in house-made almond milk, the panel eventually opens the packaging to give it a try. Almost immediately, Robert is impressed with the taste, as with many of the other sharks.

Next, the panel tries the dark cocoa flavour, which Kat explains, is made out of organic cocoa powder. Incredibly high in antioxidants, the chocolate-flavoured oatmeal snack proves to be popular among the sharks. Revealing more about its ingredients, she says that they use Michigan-grown blueberries, which contribute to its “bitter earthiness.”

Last but not least, they try the cold brew flavour, which she describes as being a “caffeine and breakfast all-in-one.” As with the previous flavours, the sharks seem to take a liking to the pod. Complimenting the direction that they’re taking, Rohan subsequently asks about their sales.

As the sharks look on, Ashley reveals that they had started the company two years ago. Continuing, she states that they initially sold the product at the farmer’s market during the first year to get feedback, from which they did $72,000 in sales. Since then, they’ve made $120,000 in 2017. Elaborating further, she tells them that they had launched in Whole Foods in March. With further prompting from Robert, the founders state that they are set to make $900,000 in sales in 2018.

Asked about production costs, Ashley reveals that they make it anywhere from 70 to 80 cents per unit, depending on the unit. With further prompting from Rohan, she subsequently tells the sharks that they sell for $3.99 retail. While he compliments them on the price margin, he notes that their “price point is out of whack.” 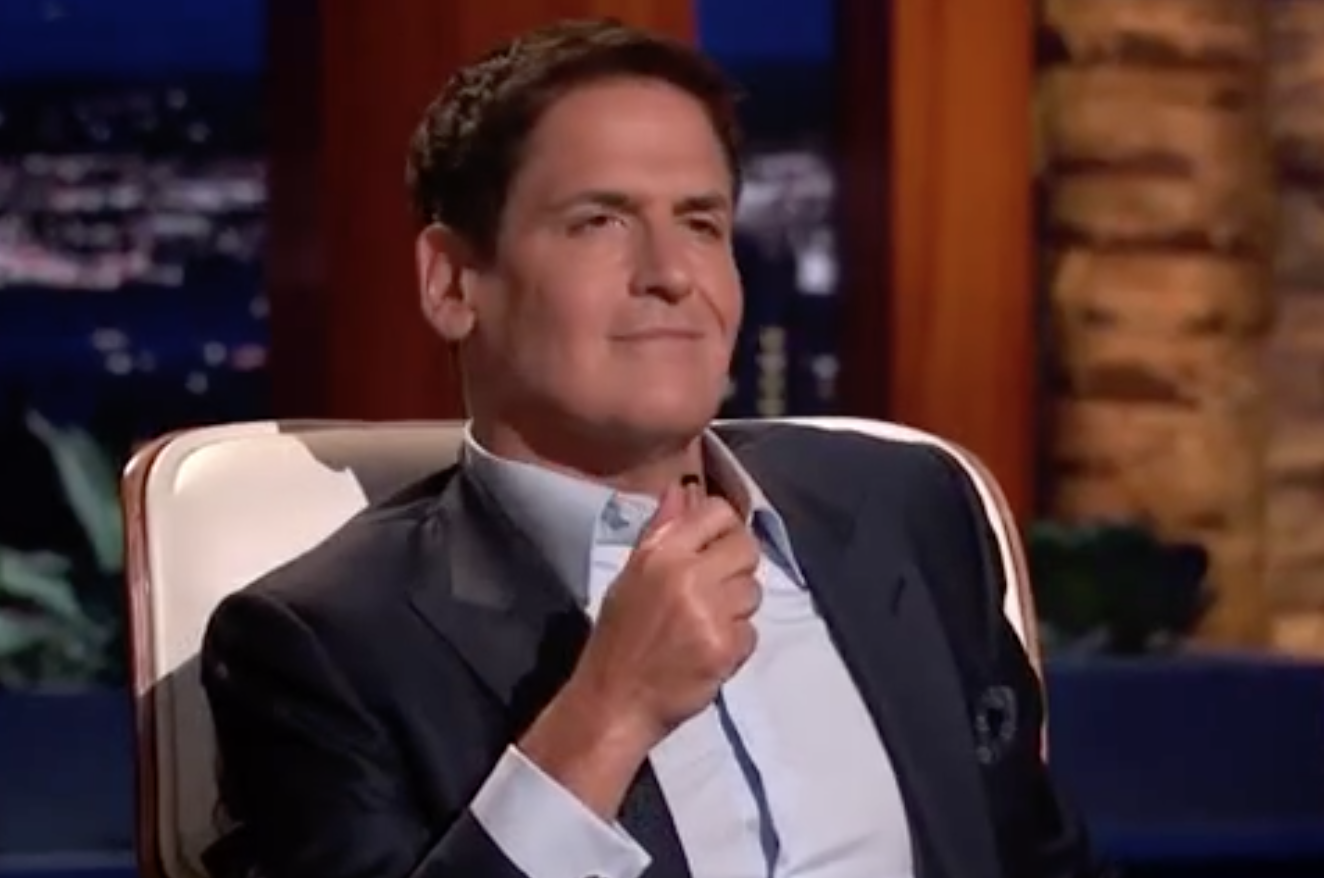 Seconds later, Mark expresses that he disagrees. For the value and convenience that they provide, he believes that the price point isn’t too high. Continuing, however, he notes that their challenge is where they’re selling it―that is, they are currently completely reliant on grocery stores. Just as he’s about to elaborate further, Rohan chimes in that other competitors are priced much lower.

Throwing out a random idea, Rohan suggests that they might be packing too much product in one container. By reducing the amount, he explains, they’ll not only be able to drop costs to goods but also bridge the snack realm by not making it a full meal. As the founders nod in acknowledgement, Lori asks them to talk about themselves.

The first to talk, Kat reveals that she worked at Goldmine in London, though it didn’t take long for her to realize that it wasn’t the best fit for her in terms of careers. From there, Ashley tells her that she went to school in New York City, after which she also worked at Goldmine.

Asked how they had come up with “the mush thing” together”, Kat says that they were talking one day when the topic of healthy foods came up. Agreeing that healthy and convenient items were hard to find, they eventually decided to put together something themselves, she explains. In the end, they began to work on the project after moving to San Diego. 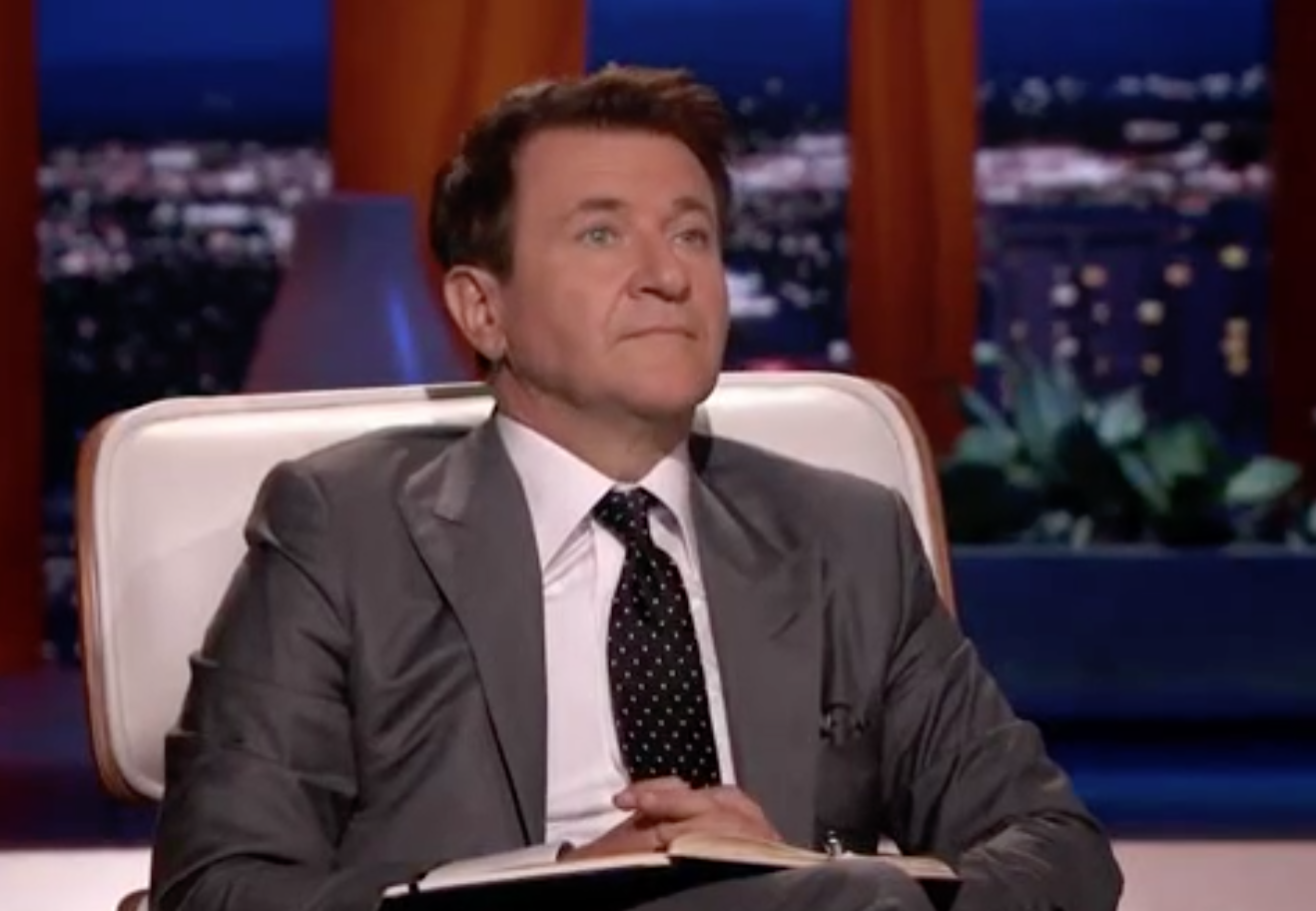 Though he appreciates their mission and purpose, however, Robert states that he is not a fan of the food business as it requires a lot of money. Not for him, he goes on to tell them that he is out. Just as they thank him for his time, the remaining sharks begin to talk over one another. Eventually, Mark points out that there is a difference between “being an entrepreneur and having gone through the grind.” From there, Rohan reminds them that he has helped many entrepreneurs turn into multi-millionaires.

Noting that what they need is not an entrepreneur but someone with ideas, Rohan and Mark begin to talk over one another again, before the former makes an offer. Pointing out that they need more money, he is willing to offer them $400,000 for 20% of the company. Just as he finishes talking, Lori chimes in that he is “genius at the food industry.” With that, Lori tells them that she will be stepping out.

Coming back into the discussion, Mark lets the founders know that he is also willing to make them a deal―that is, $300,000 for a 10% stake in addition to an unlimited line of credit. Before they can say anything, however, Barbara tells them that they fit her “type of entrepreneurs.” As such, she also provides them with an offer, one that matches Mark’s―$300,000 for a 10% stake, as well as an unlimited line of credit. 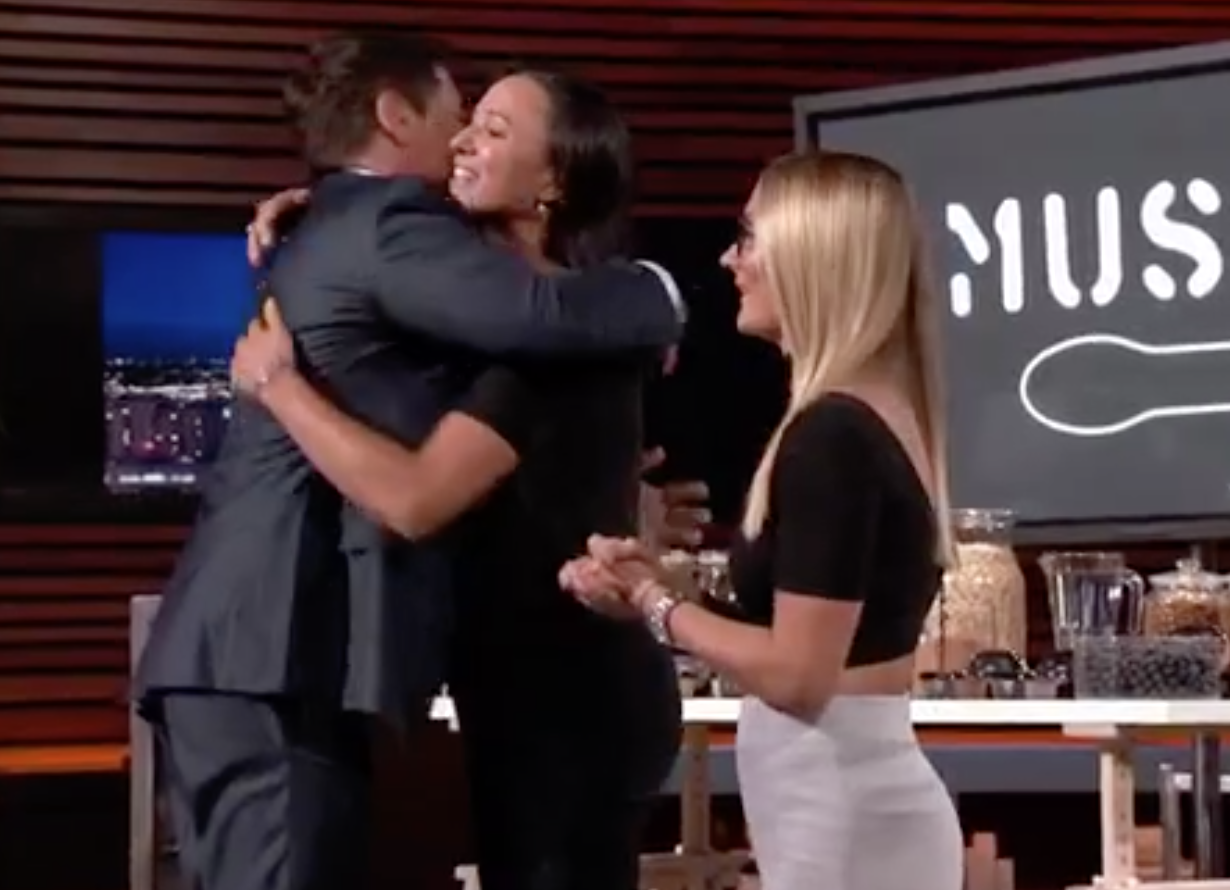 Not long after being pressed for an answer, Mark steps in with another example, that he has worked with a brand of healthy cookies―one that is very much similar to Mush―through which he’s done $8 million in sales. Before long, it’s obvious that Mark and Rohan are “fighting” for a deal. Asked what their decision will be, Kat thanks all of them for their offers before deciding to go with Mark. With that, Mark steps up for a brief hug with the founders, during which they express their gratitude. From there, they eventually walk backstage.

Many months have passed since Kat and Ashley walked away with a $300,000 deal with Mark on Shark Tank. How is the company doing nowadays?

Following their appearance on Shark Tank, the company was inundated with a large number of orders―in fact, they had received so many that they had run out of their iconic pod containers. Since then, they’ve also begun to ship their product nationally, which has led to a huge amount of growth over the past several months. In a recent interview with Kat, she revealed that the biggest testament is the thousands of emails that have come pouring in.

In terms of new releases, they recently launched a coconut cold brew flavour, which they had previously mentioned on the show. As for what they have on the horizon, they plan on moving ahead with a few new products including a kid version of the oat snack called Mushkins, and a “shmudie”, which will essentially be a protein smoothie.

What Customers Think of Mush

Currently, on Facebook, Mush Foods has an average rating of 3.6-stars out of over 140 reviews. While many agree that it is one of the best overnight oatmeal products available on the market, several users have noted that the company is relatively “slow”, in that there is often a multi-week per order. With that said, it would appear that the company is quick to address any issues that customers may have on the site.

On their official website, the oatmeal snack also has a 4.5-star rating out of over 600 reviews. Unlike Facebook, however, the general consensus on the product seems to be more positive.

Will Kat and Ashley be returning to Shark Tank for an update sometime soon? Unfortunately, that might be a difficult wish as they had only just recently appeared on the show last fall. If anything, it will probably take a while before we see them back on television. With all the press that they’ve been receiving lately, they are most likely kept busy as it is!