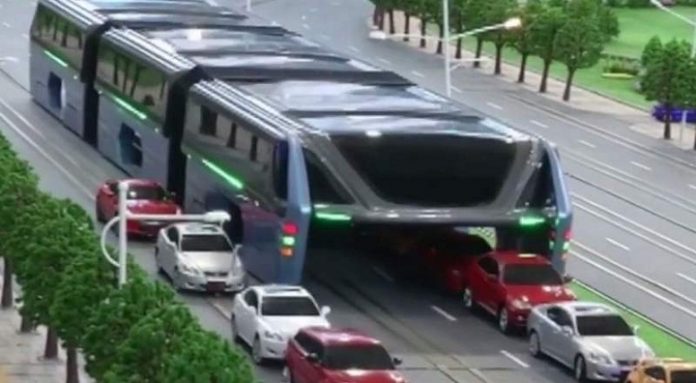 Back in 2016, China’s transport system appeared to be on its way to a brand new idea that would solve congestion problems across many cities. The project first made headlines in early 2016 but it didn’t take long for the bus to be back in the spotlight.

The Transit Elevated Bus (TEB) was supposed to change public transportation in the near future. A few months after its announcement, the TEB made its first appearance and it seemed like the project was on the right path.

The project caught the eye of the world since it was something we hadn’t really seen before. The idea was perfect for China, the world’s most populous country. In August 2016, the project took its first steps, launching in one city. The project was not completely ready so a testing track was placed along with a hangar.

Plans were for the bus to be tested and then become part of the public transport system of other cities. But the project never reached those plans and things started falling apart quickly.

By December 2016, there were reports that the bus was gathering dust in the hangar and that workers had left. One report mentioned that there had not been any activity for months. It is not known how many times the bus was tested before it was abandoned in the hangar.

Things continued to get worse for the project, which didn’t see any progress after its launch in that city. The tracks and hangar became a problem for residents, who complained that the project was slowing down traffic. According to reports, the track and hangar were taking part of the road so drivers only had two lanes to travel across the city in that section.

In June 2017, local officials put an end to the failed project. They announced that the Transit Elevated Bus had been relocated to a parking garage in the city. This didn’t mean that the bus would be tested somewhere else, it meant that the project was officially over since they also decided to remove the tracks.

Quartz and others reported that the local government made multiple requests on the plans  but the company never responded. The project’s website was removed shortly after and there were no updates from the CEO.

The project didn’t go very far after its launch but it did manage to catch the attention of officials who have the same problem in their cities. Times of India reported that India’s Prime Minister showed interest on the idea.

The project came to an end in early 2017 when the tracks and bus were removed but authorities still had questions. In July of that year, police in Beijing announced an investigation into the company for an alleged illegal fundraiser. More than 30 people were detained, according to reports. Beijing authorities also released a statement saying that they were working to recover funds from the company.

Authorities have not given any updates since the start of the investigation in July 2017.