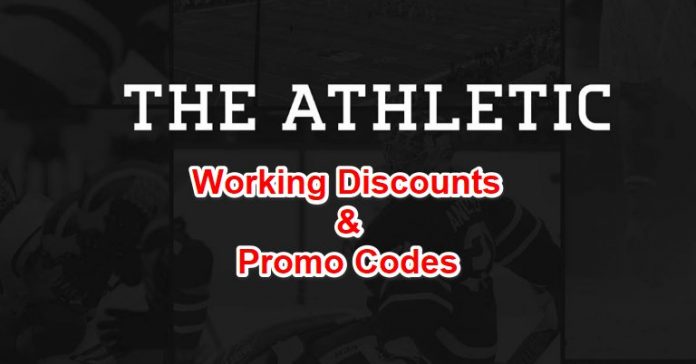 When it comes to quality sports writing, news, and editorials there’s a fair case to be made that the landscape is a little “lacking.” A company that’s trying to change this is TheAthletic.com by bring a somewhat different model to the marketplace compared to your usual options like ESPN, Fox, NBC… and so on.  That said their model involves paying for a subscription so we’ve done the leg work for you and found the best current coupon codes for saving you as much money as possible on a subscription to The Athletic.

To take advantage of the best current promo’s and coupons at TheAthletic.com follow the instructions below, good news is for the athletic applying the best working discount is a simple as following a couple steps:

The Athletic Coupon Code & Discounts For 2022

Step 1: To activate and use the promo code automatically you need to click the following link: 40% Off All Plans at TheAthletic.com

Step 2: Just by clicking the above link you will activate the largest current discount (40% off promo) at TheAthletic.com.  All you need to do once you’ve activated the promo is complete the sign-up/check out process.

The Athletic was first started as an alternative to traditional sports media that was funded by advertising and concentrated solely on what generated “clicks” and “pageviews.” The Athletic wanted to change this and started by hiring the best sports reporters in the business, both from the local and national stages, and allowed them more creative freedom in the content they provided to subscribers. As you can imagine this shift to a paid, subscription model was quite a shift from the direction the industry is currently moving with more free content available than ever before.

However this model has resulted in some of the most innovative and high quality sports journalism that’s been seen in the last 20 years for less than $5 a month when you apply the best signup codes during registration.  The Athletic offers not only editorials and news, but also provides a variety of podcasts, in depth analysis, and video content to it’s subscribers.

The get the ball rolling TheAthletic raised over 60 million dollars in venture capital to not only build out a world class publishing platform but also to entice a world class roster of content creators. Names like Ken Rosenthal, Shams Charania, Jay Glazer, Pierre Lebrun and more jumped ship from traditional media sources to join the team at The Athletic.  Now by using the promo codes and auto discounts provided above you can get the same access to over 300 of the best content creators in the world.  It doesn’t really matter what you’re preferred sports are as TheAthletic.com has world class editorials for just about every sport you can imagine.