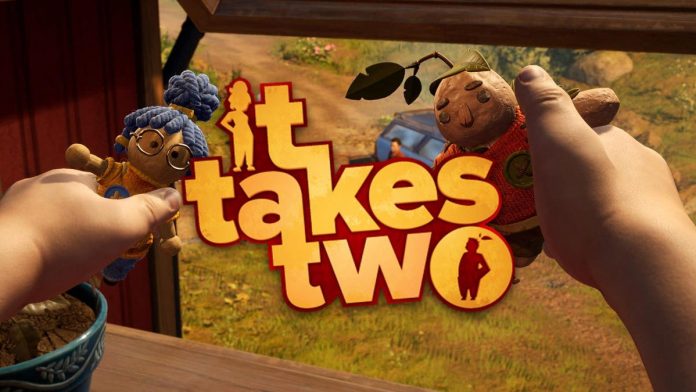 It Takes Two is a fun co-op game that will take you through numerous levels, including space, a room full of toys, and a garden. But there’s a lot to find if you like to take your time with games and explore everything. Most players won’t find these in one single playthrough, mainly because they are well hidden in the levels. Here are the references and Easter eggs you probably missed on It Takes Two:

A Way Out Characters

In one of the levels, you’ll be running around a bunch of pillows and other objects. At one point, you’ll see that the level features a different way where you can climb and reach another section. The Easter egg can be found on the left side of the map inside a really small area. Inside, you get to see the characters from A Way Out. The 2018 co-op game is from the same studio so they are there for players to see. Leo and Vincent are right next to each other and their voice lines can be activated by jumping and sitting on the button. Achievement and trophy hunters can push the button at the same time to unlock a trophy/achievement.

Towards the end of the game, players will go on a journey across several tracks and cool looking sections. One of those is just like Rainbow Road, the tracks that appear on every Mario Kart game. It is one of the easiest Easter eggs to spot if you have played Mario Kart before.

The Doll Says Bye With the Thumbs Up

At one point of the game, you’ll see it turn into an action RPG. Both characters will be running around with different types of powers and ways to get across the walls and obstacles. Towards the end, a giant doll starts crushing everything behind you, making you run to safety. The section ends with the doll seeing the platform collapse, sending it into a pool of fire. The doll goes down but not before showing a thumbs up, similar to the scene in Terminator 2. The whole thing lasts a couple of seconds so it can easily be missed.

In the section of the game where you find the Helltower and numerous mini games, there is a little boat that both players can get on. The boat takes players around the town but in the tunnel, they can stop, hop out, and enter a door. Inside, they’ll find a number of breakable pots and jars that will throw out little stones that look like Rupees from the Zelda games.

In the same town where you find the Zelda Easter egg, you’ll find the Helltower. The tower does not require to be completed for the game to advance. But those looking to complete the game to 100 percent will have to reach the top. It doesn’t look difficult at first glance but the tower is pretty high and it has a number of rotating platforms that go in and out.

The first part of the tower is pretty difficult and the second part doesn’t get any easier. Players have to be very careful if they want to reach the top. Once up there, they’ll get the Platform Prodigy achievement/trophy. They can also activate some fireworks as a celebration for reaching the top.

It Takes Two, released in March of this year, is available on PC, Xbox, and PlayStation consoles. The game was recently added to the EA Play lineup.