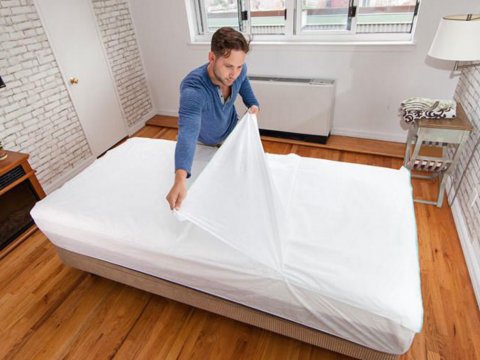 If you’re like me and find yourself barely home, but also find yourself making the most out of using your bed, then you know that sometimes finding time to clean your bed and keep out any sick germs or yuck away can be a hectic task. Fortunately, Maxwell Cohen has invented Afresheet, which is a fantastic way to keep your bed fresh and smelling great. Read on more to find out what Afresheet is, and if the Sharks are willing to get into bed with a clean set of bedsheets and a brand new, interesting product.

Maxwell Cohen has just stepped into the Shark Tank. Max has traveled from New York City to find an investment of $100,000 in exchange for 20% equity in his business, Afresheet (“A fresh sheet,” get it?). With Maxwell has come Lydia, and as Max explains, Lydia is a very busy woman. She’s a full time college student and has a part-time job in the evening, so who has time to wash their sheets? Beds are used for more than just sleeping; they are used as a desk, a hangout spot, and even as a dining room table. Pretty much everything happens on a bed. Luckily for Lydia, she sleeps on Afresheet.

Afresheet is the world’s first custom-fitted bedsheet with disposable, peelable top layers. When you soil your bed, and Lydia spills some of her cheetos to demonstrate, simply peel off that top layer, and instantly reveal the brand new layer underneath of it. For the mess, just toss it in the recycling bin! If there is another mess, do not panic – Afresheet has 7 disposable, peelable top layers. There are so many different uses for Afresheet, so moms, don’t send your kids off to college with hopes that one day they might eventually wash their sheets.

Friends coming to visit? Loan them Afresheet! Toddler isn’t feeling well? Use Afresheet! Maxwell explains that he started the company in business and poured a lot of blood, sweat, and tears into the business, but fortunately for him, he sleeps on Afresheet and can peel it away and sleep well at night. Robert is the first Shark to ask what it is made of, and Maxwell says that the sheets are primarily made of polyester. Lori asks for samples, which Maxwell then distributes to the five Sharks. 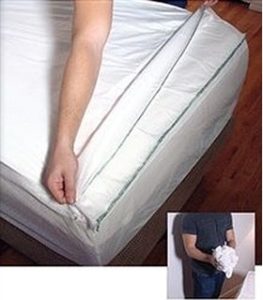 Kevin then explains that polyester does not breathe, but Max says that he has a new version of the sheet as a sample. It is made out of three different versions of polyester, but Robert says that the sheet does not feel comfortable. In fact, it feels “clinical,” like a hospital bed. However, Maxwell says that they are not competing with Egyptian cotton, but they are here for practicality and convenience. Kevin then asks again about the fact that polyester has poor breathability (meaning, airflow), but Maxwell disagrees and says it is breathable. Kevin sticks his nose up to it and inhales through his nose, which amuses Robert who asks if that is a scientific test.

Lori has another issue; it feels like paper, as she just accidentally poked her finger through the sheet. Mark asks how many sales Afresheet has, and Maxwell says that he has sold over 400 units of the first generation. They are just a start-up, so each pack of 7 sheets for a Twin XL (the typical size found in college dorm rooms) sells for $29.99. Robert says he can honestly see a bigger market for these, and he can see it in hospitals or places where there is a more clinical application. He then asks if Maxwell has approached anybody about carrying his product yet.

Maxwell explains that they have generated a lot of interest from summer camps and elderly care facilities, and they are in the works to create some orders moving forward for these people. In fact, Afresheet just attended a big college expo and has generated a lot of buzz. They are waiting for the shipment to arrive, but the shipment is being held up in customs and delaying the fulfillment of the orders. Lori then asks how many people wrote purchase orders at the show. Maxwell says that they are such a new product that it is one of the ideas that you have to wrap your head around, and nobody has changed the bedsheet for hundreds of years. So… it is looking like there were zero purchase orders placed at the expo.

Lori then clarifies; nobody ordered, and Maxwell says not yet. Daymond asks how much Maxwell invested into Afresheet. Maxwell says that he has invested the entirety of his Bar Mitzvah money, which was just over $12,000. Mark asks the cost of producing a package of Afresheets, and Maxwell estimates that they come out between $7 and just under $7.25. They are working on new materials to create a better aesthetic, as well. Kevin then says that there are many big-box retailers who sell sheets, then asks if he has shown any of the retailers this product. 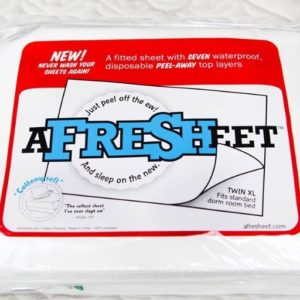 Maxwell explains that he pitched the product to Bed, Bath and Beyond, but unfortunately, Bed Bath and Beyond did not want to be the people to introduce the product into the world. It is not as soft as they would want it to be, but everyone loved the idea and said it was brilliant. Mark then explains that his business would be wise to not focus on the retail side of things and should focus more on the institution side. Maxwell then says that they have had a lot of interest and have actually been in South African hospitals and ambulances, but they are still not pushing this for the United States yet.

Kevin then asks how big a South African ambulance is, which draws a laugh from the other Sharks. Mark then says that Max is feeling his way in and learning as he goes, but Maxwell is certainly not ready for an investment yet, and especially not from him. Mark is the first Shark out. Robert then speaks up next, saying that the idea is so unique that it is something that people will have to take additional time to process and figure out if Afresheet is brilliant or if it is not. While Kevin is comparing it to cotton sheets, that is not the market. Robert has two children in college and he knows their sheets are a mess, so he thinks that his own kids would definitely buy the product to then rip it off. Robert could see elderly homes, but he wonders why people are not buying it.

Kevin, in his usual blunt fashion, says that people are not buying Afresheet because “it is a dog.” Kevin says he will help Maxwell out; he hates it. “Shoot it, get rid of it, burn it,” but put the thing down and do something else with your time. Needless to say, Kevin is out of the deal. Lori then speaks up next, saying that if the sheets were soft and comfortable, maybe with a material like microfleece, it might work a lot better. Lori herself likes soft sheets, and people go into their beds for comfort. But Maxwell argues that people know they need to wash their sheets but they don’t because they’re lazy. Lori thinks for a moment before exiting out of the deal.

Clearly, the people do not love it, Robert explains, because Maxwell has only sold 300 units of Afresheet. If they loved it, they would buy it, so Robert feels he needs to exit out of the deal since the market is screaming their true intentions to Maxwell. As Maxwell turns to exit the Shark Tank, Kevin pleads with Maxwell to please go and “shoot” his failing business.

Afresheet Now In 2023 – The After Shark Tank Update

Unfortunately, the product never took off even with the publicity they received from the show. And those that did give them a try, found them to be quite uncomfortable due to the harsh texture of the polyester fabric. The fact that Afresheet was only available in two sizes, twin and twin XL, probably didn’t help either. If anything, it greatly limited its customer base.

Still, they continued selling it on their website. At one point, they even started selling it on Amazon. However, it wasn’t very popular even among the retail giant. For one thing, the product only received 11 reviews during its entire time there, which speaks volumes as to just how popular it was. To make matters, worse, many of the reviews were negative. Some people even went as far as calling them “paper sheets” as they’re “thin”, “uncomfortable”, and “rip easily”. Not only that but many users questioned the sheets’ recyclability as they’re made of polyester fibers.

Having said that, some people did seem satisfied with the product. For example, one user gave the sheets five stars for being “disposable” and “easy to use”. However, they also stated in the same review that the price for the product was quite high, which made them hesitant to order more.

In the end, Afresheet didn’t last very long. By 2016, they only had one item left in stock and given the reviews that they had received, many users believed that they would stop production altogether afterward—and they were right.

As of 2023, the company is out of business. In fact, there isn’t much about them at all even if you scour the internet; it’s almost as if they never existed at all, which isn’t too surprising seeing as how they were only active for a short period of time. Not only is their site gone but their social media pages, including their Facebook page, have also been deleted.

So what is Maxwell up to nowadays? According to LinkedIn, he’s the CEO of Peel Away Labs. Interestingly enough, it looks like he’s reworked the Afresheet concept as the company now sells disposable fitted sheets for camping and fitted mattress pads for cribs. Not only that but since the pandemic, they’ve also started to sell anti-viral masks.

For those who are interested, you can check out their website at peelaways.com. Currently, their “Camp-A-Peel” goes for $29.99 (seven layers) and their “Crib a Peel” goes for $25.99 (five layers). They also offer free shipping across the U.S. on all orders above $50.