Before her appearance on Shark Tank, Sarah Oliver turned her knitting hobby into a business selling handbags. When she was having trouble meeting the demands of her customers, she found help in an unlikely place. Would the Sharks go along with her vision, and invest in Sarah Oliver Handbags? Let’s take a look. 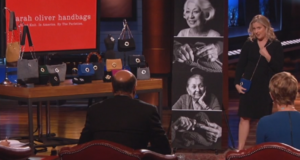 Sarah Oliver started off her audition video by saying that she learned how to knit from her mother and grandmother. She said that one year, she knitted every woman in the family a Christmas gift, which they loved. It was this Christmas that inspired the Sarah Oliver Handbag business. Sarah needed help to fill all of her requests, and she recruited an unlikely group – senior citizens. She calls them the “Purlettes +1.” The video showed a few senior citizens, and there was even an older man. Sarah called them the backbone of the business. She said that it helps people to connect with the company when you’re buying the bags. Sarah stated that she hopes that the Sharks will invest so she can continue employing the elderly.

Sarah walked out into the Tank with one of her bags. She greeted the Sharks and introduced herself. She offered the Sharks 20% of Sarah Oliver Handbags in exchange for $250,000. Sarah said that it was no secret that most women loved handbags, but many of the bags lacked meaning. As the camera panned over a selection of Sarah Oliver bags, Sarah told the Sharks the story behind them. She showed a video of a couple of the Purlettes +1, including the male, Hector, who said that he was the +1. The elderly women on the video all expressed their love for Sarah, the business, and the opportunity to work into their twilight years.

When Sarah finished her presentation, Barbara asked her if it was a charity or business. Sarah said that it was fully a business. Mark requested to see the bags, and Sarah handed out samples. Sarah stated that the O on each of the bags was a removable pin that you could wear separately. Kevin opened his and removed a card. He stated that the card said, “My name is Daphne, and this is my story.” Kevin asked if Daphne knit his bag. Sarah said yes, and pointed to a photo of the 92-year-old woman.

Barbara asked what she paid Ester to make the bag she was holding. Sarah stated that the senior each get $17 per bag. Kevin wanted to ensure that the senior were all doing the work willingly so he would not be investing in a geriatric sweatshop. Sarah laughed and told him that she knew that he was going to ask that question. Sarah says that she gets in trouble with her senior workers if she doesn’t bring them enough work for the week. Lori stated that the bags were very cute. She asked Sarah for the cost of labor and materials, as well as the final retail price.

Sarah said that her most attractive bag, known as the Resort, costs approximately $45 to make, and retails for $225. Robert asked what the sales looked like. Sarah said that she’d done $1.9 million in revenue since she started the business. Mark looked impressed. Sarah continued, saying that she earned $360,000 last year. Mark asked what she needs an investment and a Shark for since she seemed to be doing so well on her own. Sarah said that she was looking for the working capital to be able to service the 90 stores in which she had her products.

Kevin looked surprised, asking Sarah if she had an online marketplace as well. Sarah said that she does sell the bags online as well. Kevin stated that she is missing the opportunity to tell the stories of the women. Barbara asked her how she was able to find her workers. Sarah said that when her children were small, she took them to volunteer at a retirement community. She kept that community in mind when she was looking to scale the production of her business and came up with an amazing brand story as well. Robert said that the whole thing was impressive.

Kevin wanted to know if there was more information about each of the seniors on the Sarah Oliver Handbags website. Sarah said that they have more of their stories, as well as videos. Kevin asked how many purses a Purlettes could make in one day. Sarah said that one worker could make 3 in a week. Lori stated that the concept was very touching to her. She stated that we as a society do not value our elders the way that we should, and the business let them feel like they were a part of something that they could be excited about. Lori continued, stating that senior citizens have a need to feel important and valued like everyone else does. Lori said that she would love to make an offer that the other Sharks could come in on to contribute to making the company a staple. Lori said that her offer was the $250,000 for 25% total equity, who would be 5% for each Shark.

Robert was the first to join her. He told Sarah that he believed in her concept, and he thought that getting a vision and a story that resonates with people would make it successful. Lori said that it would actually work once they got a million more Purlettes. Kevin stated that he wanted to ask a few more questions about the numbers before he decided to invest. Kevin stated that it wasn’t the “charity tank” to him since he already gives a lot to charity. It was primarily an investment to him. Kevin asked her how he would be able to find Purlettes that do four bags per week.

Sarah told him that she has about 30 knitters across two retirement communities. These knitters make about 4,000 bags a year, which translates to $900,000. Sarah’s goal was to increase the amount of retirement communities who wanted to work with her. Barbara let her know that Lori already made an offer, she did not have to impress Kevin. Lori told her that she made a deal that included all of the Sharks, but they did not have to fall in line. Barbara said that she did not see Sarah Oliver Handbags as an investable business, but more of a charity. She went out.

Sarah thanked Barbara. Mark was the next to go out. He complimented her on the business but said that it just was not a good fit for him. Robert told her that he would be happy to go in with Lori. Mark stated that Sarah better takes the deal before someone changes their mind. Sarah said that she was excited to work with the two of them, but still wanted to hear from Mr. Wonderful. Kevin sighed and considered. Kevin said that the only way he would go in on the deal with the other Sharks is if Sarah agreed to 30%, which would give each Shark 10%. He said that he refuses to get up in the morning for less than 10%. Lori asked if it was that important to have Kevin added in. Kevin said that it was a business, and he appreciated that she was paying the Purlettes. Kevin said that Sarah would have to increase her capacity by 400% to actually make money off of it. He said that he was willing to help in exchange for 10% if she wanted him as well as Lori and Robert. Robert stated that he liked that deal better, and Lori stated that she was also fine with it.

Mark laughed and told her that she should’ve said yes while she had the chance so she would have gotten to keep more equity. Sarah tried to backpedal, and go back to just Lori and Robert, but Robert insisted that he liked Kevin’s deal better. Lori told her that that’s what happens on the Shark Tank when you wait. Sarah deliberated on the 30% as the Sharks wondered what she was going to do. She accepted, exclaiming that the Purlettes would be so excited. The three Sharks got up to hug on the deal. Kevin told her that she needed to find more Purlettes, and Lori said that she was going to make a lot of people very happy with her business. The Sharks all congratulated her as she left the stage.

Sarah Oliver Handbags Now In 2022 – The After Shark Tank Update

Sales skyrocketed after the episode aired. In fact, they received so much web traffic, that their website crashed. Fortunately, that was only a temporary problem; they eventually recovered and carried on with their sales. In the end, the business continued to thrive over the next couple of years. If anything, the public seemed to love the story of the Purlettes.

So it came as a surprise when Sarah announced that they would be closing shop in April 2017. According to the message that she posted online, the closure was due to “circumstances beyond her control.” While she didn’t provide any details, she did invite those interested to watch a mini-documentary titled, A Sense of Purpose, to “understand [their] challenges a bit more.”

The video, which was posted to YouTube, addresses the problems of age discrimination in employment and talks about the desire for seniors to feel needed in their communities. It also revealed the reason behind the company’s closure. Apparently, Sarah had received a surprise visit from the Federal Department of Labor for not paying her “employers” an hourly wage (the per piece rate she paid the Purlettes worked out to be less than minimum wage once it’s divided over the number of hours worked).

According to Esther Cherk, who knitted the bag held by Barbara on the show, “someone got the wrong notion that [Sarah] might have been exploiting seniors.” In the video, she emphasized that that “was not the case at all.” Still, many commenters felt that she was exploiting senior citizens. For those who are interested, you can check out the documentary video here. As of this writing, it has already been viewed more than 19,000 times.

As of 2022, nothing has changed. As far as we can tell, it’s no longer possible to purchase their handbags anywhere. Their social media pages, however, are still active to this day; not for business purposes, but to raise awareness about different issues. For example, they recently retweeted a post about World Alzheimer’s Month.

What is Sarah up to nowadays? We know that she’s still updating the company’s former social media pages but that’s about it. For one thing, she still has “Sarah Oliver Handbags” listed as active on her LinkedIn page. For all we know, she might have moved on to other things but just hasn’t had the chance to update her profile yet.

One thing’s for sure, though, she probably won’t be returning to the Shark Tank set anytime soon. Not unless she comes up with another brilliant business idea at least.