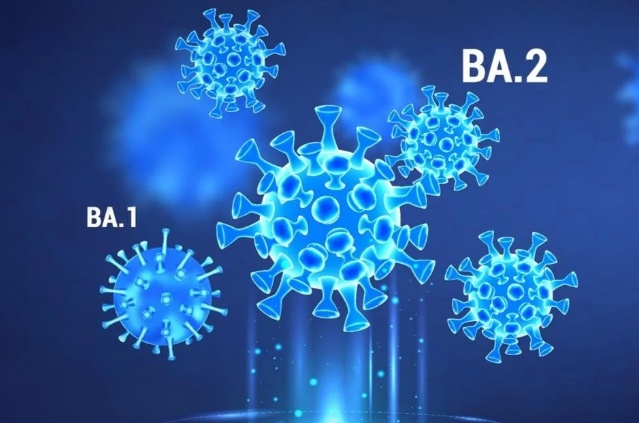 BA.2—the latest subvariant of omicron—is now the dominant strain of  COVID-19 in the United States. It accounts for 50.4% of all COVID cases in the Midwest, which includes Michigan, Ohio, Minnesota, Illinois, Indiana, and Wisconsin and approximately 55% of all COVID cases in the country. Compared to previous variants, it has several key mutations, including those that affect the spike proteins on the outside of the virus.

According to the World Health Organization, this subvariant now represents 86% of all cases. Not only that, but it’s also much more contagious than its siblings BA.1 and BA.1.1. This has to do with the mutations in the spike protein, which makes it 30 to 50 percent more transmissible compared to the BA.1 variant. Increased transmissibility is a particular concern among close contacts of those infected.

And like the other Omicron variants, vaccines do not provide as much protection against BA.2 compared to the original strain, including Alpha. For one thing, protection has been shown to decline over time. Given that, we may very well need a fourth booster to prevent serious illness (ie. hospitalization and death).

That’s not all, it’s also much harder to track compared to BA.1 and BA.1.1 (the former had a missing gene which allowed it to be tracked by a common PCR test). For this reason, it’s been called the “stealth variant.”

Can the BA.2 variant reinfect those who’ve already had BA.1 or a previous variant? The short answer is yes. However, only a handful of BA.2 reinfections have been identified among tens of thousands of cases so the risk to the general public remains low.

Not only that, but the evidence so far suggests that BA.2 is no more likely to cause severe disease.  However, public health officials say that it’s too early to know whether or not it’ll cause a significant wave. “It’s still a huge public health problem”, according to an epidemiologist at the University of Edinburgh.

What are the Symptoms of the Omicron BA.2 Variant?

Recent studies have shown that people infected with the BA.2 subvariant have a higher chance of showing gut-related symptoms. For example, an individual may experience nausea, vomiting, diarrhea, heartburn, bloating, and abdominal pain.

Other common symptoms include shortness of breath, fever or chills, fatigue, muscle pain, headache, cough, and loss of smell or taste. Dizziness is a possibility as well, according to anecdotal reports, though they’re unfounded at this time.

Due to vaccinations and immunity acquired from previous infections, however, experts say that patients with Omicron are more likely to report a wide range of symptoms. Those who have been vaccinated may also have no symptoms or very mild symptoms.

The Effect of BA.2 Worldwide

The BA.2 variant has been blamed for recent surges around the world. Last month, it made up about 86% of all cases globally. The trend is particularly prevalent in Southeast Asia (Vietnam, Thailand, Malaysia), followed by the African Eastern Mediterranean, European, and Western Pacific regions.

In Europe, Omicron BA.2 has hit the United Kingdom and Germany particularly hard, especially with the loosening of safety measures across the continent.

Recombination of BA.2 and BA.1 Subvariants

While BA.2 is still the primary coronavirus strain in the United States, scientists have identified a new variant called XE, which is a hybrid of BA.1 and BA.2. It was first detected in the United Kingdom and is estimated to spread 10% more easily compared to BA.2, which itself was already more contagious than the original version.

Having said that, “there’s no reason to panic at the moment” according to health professionals as there’s currently no indication that it’ll cause a new wave.