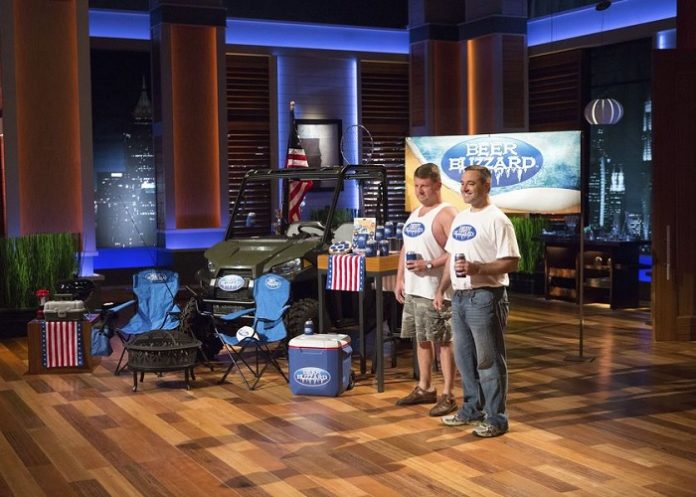 Beer Blizzard founders Tom Osborne and Mike Robb loved nothing better than spending a few days out in the woods every year, getting away from their busy careers and relaxing in the natural surroundings of their native Pennsylvania. Tom, a food safety executive, and Mike, an attorney, enjoyed their regular getaways but continually found themselves frustrated by that blight upon modern man, the problem of warm beer.

Being not just enthusiastic drinkers, but also inventive and resourceful by nature, the pair began to work on a project that would solve the problem once and for all. After many months of trial and error, and a fair amount of drinking in order to test their inventions effectiveness, they finally came up with the Beer Blizzard, a plastic ice cube, containing a hydra-gel that froze quicker than water, and remained frozen for longer, but the really unique thing about the Beer Blizzard was its shape.

Every carbonated beverage has one thing in common, whether its your favorite soft drink, or your preferred beer of choice, and that’s the rounded insert at the bottom of the can. It’s there to equalize the pressure within the can, and Tom and Rob designed their product to fit exactly inside the gap, the perfect place to bring a drink back to an ice cold temperature quickly. In 2014 they took their original idea to the Invention & New Product Exposition (INPEX), a unique trade show that showcases new products, innovations and inventions to marketers and manufacturers, and it was a big success.

The Beer Blizzard won a Gold Medal at the INPEX show in the Technical Design category, and Rob and Mike were so impressed by the attention their product received, that they turned to the crowd funding site Kickstarter in April of that year, with the aim of raising $5,000 in order to fund a 10,000 unit production run. The response from the Kickstarter community was as positive as the reception at INPEX had been. The $5,000 goal was reached within three days, and by the end of the 45 day long campaign 2,000 backers had pledged over $43,000.

Tom and Mike came to the Shark Tank in March 2016, hoping to gain an investment of $100,000 in exchange for 20% of the Beer Blizzard business, but they also needed the assistance of a Shark partner in order to establish contacts with big retail chains.

The pair had decided to go for a casual style of pitch, and they were dressed appropriately, they wore jeans, shorts and Beer Blizzard T-shirts. Tom began by explaining that Mike was the company CEO, but he was the CRIC, the ‘Chief Redneck in charge’. The sharks chuckled dutifully as Tom went on, revealing that as the CRIC, he was an expert in two areas. The first one was fashion, as he gestured at his own casual attire, but the second one was beer, and finally he got down to the root of the matter, ‘Cold Beer Sucks!’ he exclaimed, as Mark Cuban nodded his head in full agreement.

The pair explained their previous efforts to find a solution to this most serious of problems, and eventually revealed the final product they had devised, the Beer Blizzard. Tom explained that it was a re-usable ice-cube, but most importantly it was designed specifically to sit inside the dome-shaped gap that was at the bottom of all carbonated beverages. With their ingenious solution, America would never have to suffer the indignities of a warm beer again, ‘America, You’re Welcome!’ the pair chanted in unison, and the Sharks broke into a brief round of laughter.

Samples of ice cold beers were handed out to the sharks next, and although Lori didn’t taste her sample with the same enthusiasm as some of the other sharks did, she was quick to ask how effective the Beer Blizzard coolers were at actually keeping a beverage cold. Tom confirmed that independent testing in a laboratory had proved that using the product with an insulator would keep a drink cold for up to 21 minutes, in conditions that would leave it warm after six minutes without the aid of Beer Blizzard.

Kevin O’Leary inquired about patents, and Mike confirmed that there were design and utility patents pending on the Beer Blizzard. They confirmed that the product contained a gel that would freeze for longer than water, but didn’t seem too willing to give too many details away just yet.

Lori pointed out that although the product was marketed towards beer drinkers particularly, it would also be useful for any soft drink. She asked if the pair had ever considered widening their target demographic to include all types of beverages. Mike explained that although he and Tom had discussed that strategy, they preferred to keep the Beer Blizzard as a product marketed towards drinkers, as they would be far more concerned about the temperature of their drinks.

During the segment there had been much laughter, and the light-hearted attitude in the tank was not only unusual, but also a good sign for the Beer Blizzard pair. At all times they had been quick to supply any information that the sharks required, and their good-natured characters were rubbing off on the Sharks, who seemed far more relaxed that they usually do during a pitch.

The subject of the Kickstarter campaign came up, and Tom told the Sharks about the enormous success the campaign had achieved. Robert Herjavec asked what the company sales had been in the previous twelve months, and Tom confidently told him the business had achieved $166,000 in gross sales during the period.

Robert Herjavec noticed that the packaging for Beer Blizzard stated that the product was ‘As seen on TV’, and he asked what that was referring to. Tom admitted that they had done that because of their upcoming Shark Tank appearance, which elicited further laughter from the sharks, and he amused them even more when he disclosed that he and Mike had been drinking when they came up with that idea.

Daymond John wanted to know what the $100,000 investment would be used for. Mike told him that they wanted to increase the business inventory, increase the size of manufacturing runs, and thereby increase their profit margins, but he also admitted that the pair needed the help of a shark to set up meetings with big retailers.

Robert Herjavec believed that Beer Blizzard was just a product, it was a good one, but it was not enough to base an entire business around. He wished Tom and Mike good luck for the future but he was not interested in investing in the business. Daymond John agreed there was a lot of work required to expand the business further, and he joined Robert in dropping out.

Mark Cuban however had far better news for the pair. He admitted he liked the idea, and although it probably wouldn’t make millions of dollars, it had plenty of potential for success. He offered the requested $100,000 investment in exchange for 25% of the business.

Tom started to respond to the offer, but Lori quickly interjected, ‘Wait there’s more’. She too was interested in a Beer Blizzard partnership and she offered exactly what the entrepreneurs had been seeking from the tank, $100,000 in exchange for 20% of the business.

Tom and Mike asked for a moment to confer, to the surprise of the sharks. Daymond remarked that there was nothing to think about, considering Lori’s offer was the better of the two, but there was something else the entrepreneurs were considering. Eventually Tom told Lori that he and his partner were ‘flattered’ by her offer, but Mike had a ‘serious man-crush’ on Mark, as they both hailed from Pittsburgh, so they would accept his deal.

Mark got up to shake on the deal as Lori remarked ‘How can I compete with a man-crush’. Tom and Mike left the tank to the sounds of hearty laughter as they announced they were off to do some more ‘Research & Development’, and Mark Cuban smiled at Lori with just the tiniest glint of triumph in his eyes.

Beer Blizzard Now In 2022 – The After Shark Tank Update

Unfortunately, the $100,000 deal with Mark never went through. Still, the show had a profound effect on the business. For one thing, sales exploded after the episode aired. It also gave them the publicity they needed to take the company to the next level.

Before long, the product was available in multiple retailers including Walmart, Bed Bath & Beyond, Target, and 7-Eleven. Not only that, but they also landed a partnership deal with NASCAR racer, Dale Earnhardt Jr; this allowed them to customize the kits with his name, car number, and logo. They even began selling Beer Blizzard coolers at various NASCAR tracks.

They also launched a Kickstarter campaign in hopes of ramping up production and it was a huge success. Not only did they manage to reach their goal of $5,000 in just three days, but they also ended up raising more than $43,000 in total. By then, they were selling six packs of Beer Blizzards for $12.99 and twelve-packs for $19.99. Each pack also came with a free Beer Blizzard Koozie, which is a fabric beer holder.

That’s not all, they had also hoped to get their product into breweries, which was one of their final goals.

Unfortunately, that never happened. In 2018, just two years after appearing on the show, they shut down the company. Not only did they delete their website but they also shut down all of their social media accounts.

They also pulled the product from Amazon, which by then, had a 3.5-star rating on the site. Judging from some of the reviews, most people seemed to like the product, though some claimed that it did not work as described. In terms of why they went out of business, it’s hard to say as there was never an official announcement. However, our best guess is that they weren’t making enough profit. They might have also run into some production issues, which would have hindered their ability to meet demand.

What are the founders Mike and Rob up to now? From the looks of it, they’ve gone back to their day jobs. According to LinkedIn, Mike has been a partner at Bailey & Glasser since July 2020. Prior to that, he was an attorney at Salvinis, Kane & Gallucci, LLC. As for Tom, he was the president and chief operating officer at BioWALL from 2017 to 2020. Interestingly enough, there’s nothing listed in terms of his current employment.

Will the pair be coming up with any new products in the future? Only time will tell.