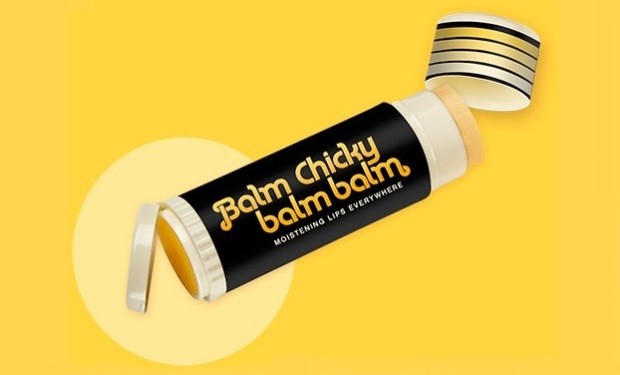 Liz Moscoe and Abby Schwab are the co-founders of Balm Chicky balm balm, and have come to the Shark Tank to seek a $75,000 in exchange for a 20% equity stake in their company. So, lip balm – everyone has used it in some sort of extreme temperature, right? Friends, coworkers, relatives, not to mention, germ-y children – all these people find excuses to borrow and run their lips all over your lip balm. Forttunately, Liz and Abby have come up with Balm Chicky; Balm Chicky is a 70s-inspired lip balm brand with one special package. What is the package? It’s a double-ended tube that allows for friends to share their personal healthcare products without sharing any of the nasty germs.

How does this work? Liz and Abby demonstrate. Liz mentions that her lips hurt, so Abby offers her the “friend end” since she does not know where Liz has been – the “friend end” offers a separate section of the balm which allows the owner to be generous with their lip balm while keeping their own side pristine and germ free for their own personal use. This transforms an everyday-use product into a shareable, and spreadable conversation piece that is hot to trot. Of course, the Balm Chicky lip balm has a little catchphrase to go with it, making it sound like the “bow chicka bow wow” noise that can be associated with attractive women.

Barb is the first to ask the question on my own mind – how did Liz and Abby come up with the idea for double-ended lip balm? However, Kevin fires back with his own question – who actually cares? However, Liz answers that the both of them are “balm freaks” as they live in the mountains and partake in outdoor activities such as skiing. So, every time they found that they took out their lip balm, the lip balm borrowing ran rampant as people asked for some. Kevin is still critical and unconvinced, and wants to know about sales – are they actually selling any Balm Chicky units?

The girls distribute samples, upon Lori and Robert’s request, while replying that they are in over 60 stores in the United Kingdom, Canada and the United States. Robert jokingly asks to borrow any lip balm while Lori offers the friend end of the lip balm, showcasing that the Sharks do indeed know what chapstick and lip balm is for. Mark feels the need to ask if the retail stores are adult novelty stores, mentioning that there is nothing wrong with that, but Liz and Abby confirm that most of their stores are the afore-mentioned type of stores. Mark brings up the packaging, which has a scantily-clad woman on it, and mentions that he would love to know more. 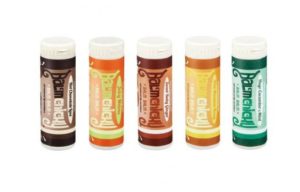 Liz and Abby explain, they came up with the idea for the Balm Chicky as a proof-of-concept for the friend end. They then decided they want to go after the masses, finding that they have massive licensing opportunities since their patent covers not only the shape of the tube but also any shaped tube comprised of a lift device, whether it be a push or twist, with a stationary pod on the bottom for more contents. Robert mentions that he loves the name, and asks how much money the women have made. Unfortunately, Liz and Abby drop a reality bomb; they have only sold about $17,000 worth of Balm Chicky balm balm in their lifetime.
Robert is blown away and asks for clarification, while Kevin voices his concern about how the two women are remaining in retail. They are selling “zero point zero zero nothing-burger per store,” in Kevin’s exact words. In order to establish their supply chain, Liz explains, they had to create the mold, file the patent for the tube, and thus, they wanted to find if they could get into stores without a dollar towards marketing. Kevin finds this depressing, but asks about the price of each unit. Balm Chicky balm balm wholesales for $4.50, and $9.50 for retail. The price of an average lip balm tube costs $2.59, although it is far smaller than the Balm Chicky.

Lori points out, a savvy customer could technically buy three units of lip balm instead of going for the Balm Chicky. Liz points out that the chapstick or other lip balm is not a conversation piece, while Mark explains that most people do not give enough thought to their lip balm to care about it being a conversation starter. Mark explains, he sees Balm Chicky as a product and not a product, and the two women are trying to find a path to turn it into a company. However, they do have a niche in that they are selling it in adult entertainment locations, but they ultimately need to focus on that and win their niche before they can start the battle to become a full company. Liz says that the two of them have spoken to industry experts about the name of their product, and the full name “Balm Chicky balm balm” is gold. Mark feels that the name is not gold, but it is cute, and there is a huge difference.

Lori also finds the name catchy, but the most important thing is to have a great product, and at that point you can find a great name. Lori says that she tried the product from both the user end and the “friend end,” and she did not like the friend end. Lori is the first Shark to exit out of the deal. Robert speaks next, saying that there are a couple of challenges – most buyers for lip balm are younger-skewed, such as teenagers and adolescents. However, as a parent, Robert does not feel comfortable that his children would be able to purchase an adult-themed lip balm. For a niche market, this is fantastic. However, Abby feels as though they could begin a line to market towards younger people. 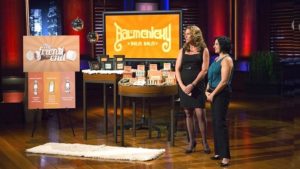 Abby’s response prompts Robert to point out, every time one of the Sharks gave Liz or Abby a suggestion or hypothetical, Abby says that they could easily consider and start to do that, as well. While it is great to pivot, Robert says, the two of them pivot every single minute – $17,000 is also not a proof of concept. The two of these factors combine in Robert’s mind, and while he is also out of the deal, he feels the urge to say the name of the product one more time; “Balm Chicky balm balm.”

Kevin leans back, thinks for a moment, then says that if he had to think of a business plan, a niche lip balm would be nowhere near the priority of the list. The sales are not even cockroaches, he says – Balm Chicky is a waste of his time, and he is definitely out. Kevin adds, “he would definitely burn it himself if they do not.”

Barb finds the name cute, but ultimately, the best product is a product that solves an issue. There is no problem to solve with this. Though, Barb mentions that she has had 3 or 4 businesses that she has had to reinvent and a little move “left or right” can really change the image and future for a business. While Barb is sure that the two women will find a way to appropriately pivot their business, she is ultimately out of the deal as well.

The entire time Barb explained her thoughts, Kevin harped on her with his own thoughts – Abby jokingly points out that she does not understand why Kevin is called “Mr. Wonderful.” However, Mark returns to the business at hand, and explains that the girls have a profitable niche that they should be exploiting. That niche is adult entertainment – exploit the niche that they have found success in, and they should make hundreds of thousands of dollars, Mark explains. If they can sell $200,000 worth of lip balm from simply sending an order to the manufacturer, they are putting $100,000 in their pocket without doing anything. However, when they are trying to force the business to mutate into something that it should not be, they will “grow themselves out of business.” Mark is out of the deal, as well.

Unfortunately, Liz and Abby do not find an investment in their Balm Chicky double-ended chapstick idea. Kevin even mentions as the two women walk out, “this was horrible,” and all of the other Sharks seemed to share the same sentiments as Mr. Wonderful.

Unfortunately, the friends didn’t land a deal with the sharks. Despite that, however, they managed to grow to the brand. For one thing, they landed a deal with Target, who agreed to sell their lip balms nationwide in the spring of 2014. However, it didn’t last long. In the end, sales weren’t optimal and the retailer eventually pulled the products from their shelves after a year or so.

Aside from Target, their products were also available on Amazon. However, they were met with mixed reviews. Take their “Hot Chocolate Love” Balm Chiky Balm Balm lip balm, for example, it had a measley 3.1-star rating out of 9 reviews, with many saying that it didn’t taste like chocolate and that the texture was way “too waxy.” Some also disliked the idea of sharing the lip balm with friends.

In addition to that, they also sold their lip balms on their website, though their pricing structure left many confused. For example, they advertised a promotion where you could buy one lip balm for $5, or three for $18, which makes little sense as it’d be much cheaper to buy them individually. What made it even more confusing is the fact that they also offered five lip balms for $25 and free shipping on all orders above $5. If anything, the confusing pricing structure only made them look that much more desperate for sales.

At the end of the day, the company only lasted a couple of more years. In January 2016, the pair of friends shut the company down for good. Not only has their website gone dark, but their social media pages, including their Facebook page, have also been deleted. Given that, it’s probably fair to say that they’re not coming back anytime soon.

What are Liz and Abby up to nowadays? According to LinkedIn, the latter is currently the Vice President of Programs at Conscious Capitalism, Inc., where she leads the senior leader network team and collaborates with them to develop strategies and initiatives. She’s been working as the VP since February 2022 and prior to that, she was the Senior Leader Programs Director. Altogether, she has been with the company since February 2016.

In addition to that, she also works as a freelance events contractor in the Portland, Oregon, area. Over the past few years, she has worked with several clients including the Bloody Mary Fest, FEAST Food Festival, and The Bite of Oregon, among others. And prior to that, she was an Event Producer at FINDpdx (she started working there after Balm Chicky Balm Balm folded in 2016).

As for Liz, we’re not too sure. We weren’t able to find any information on her but we can only guess that she’s moved on to other things like her friend.