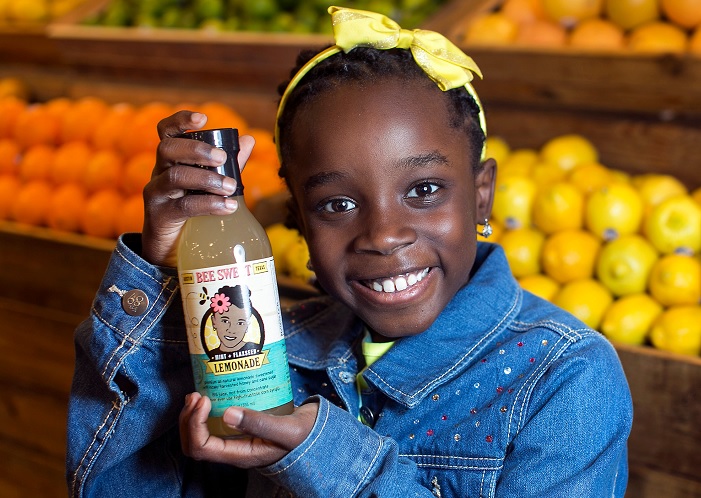 They say that wisdom and experience made a great entrepreneur even greater, but some of us seem to be born with a good helping of wisdom to begin with. Mikaila Ulmer, the founder of Beesweet Lemonade, is one such person. When she appeared on Shark Tank, she made sure the sharks didn’t pull any fast moves on her, despite the fact that she was only nine at the time.

When she was aged just four, Mikaila was stung by two bees within a matter of days, and her Mom, D’Andra, encouraged her to study their place in the ecosystem, to help her recover from her sudden aversion to them. Mikaila began researching bees and soon became concerned about the Worldwide dwindling bee population.

At about the same time D’Andra, and Dad Theo, were helping Mikaila find inspiration for a new product, one that she could showcase in a business competition for children, the Acton Children’s business fair. Fortunately that coincided with Great granny Helen sending the family a 1940’s recipe book that contained her secret recipe for flaxseed lemonade.

Mikaila had a flash of inspiration and Beesweet lemonade was born, she included healthy flaxseed as directed by the secret recipe, and sweetened it with local honey. The lemonade created a buzz from the start and Mikaila found herself running a fledgling lemonade business, while also donating a percentage of profits to help save the honeybees.

It wasn’t long before the pint-sized business prodigy was keen to grow her business further, and it was with that in mind that she, and Dad Theo, appeared on shark tank in March 2015.

When the Beesweet duo appeared on Shark Tank, they were looking for a $60,000 investment in the business in exchange for 10% equity.

Mikaila began her pitch by asking the sharks when was the last time they had tasted something great, that also happened to be good for them. She revealed the conditions that had led to her inventing her product, her interest in bees, the business competition that she entered, and the old cookbook provided by her grandmother. She had developed Beesweet lemonade that was not only sweet and delicious, but it also contained healthy flaxseed, and supported the local bee population.

Theo continued, he explained that there were currently four flavors available, and that the flaxseed within the beverage made it one of the healthier drink options available to consumers.

Mikaila finished up by asking the sharks ‘Which one of you will be sweet, join my team, and help me live my American dream?’.

It was a good pitch, but a free sample was always likely to sweeten the sharks up, Mikaila had done her homework and was handing out samples before they could even ask.

Lori Greiner couldn’t drink lemonade, but when Mikaila revealed she was just nine, Lori admired her composure, and Mikaila had been impressive. She had just presented a professional polished pitch. The Beesweet entrepreneur may have been nine, but she was also very prepared for her appearance on the show.

Robert Herjavec inquired about sales to date. Theo explained that the business had been launched five and a half years previously, and sales in the last year had been in excess of $25,000.

Kevin O’Leary wanted to know where the product was being sold, Mikaila revealed it was retailing in Whole Foods markets, which impressed the sharks. Theo added that it was stocked in over 30 locations, in four different cities. There was also a deal in the pipeline to expand into the South-West region, and achieve blanket coverage in four states.

Mark Cuban asked about the flaxseed, and the impact of it on the product. Mikaila informed him that she couldn’t tell him how the flaxseed was added into the drink, because it was a secret. She dangled some bait for the sharks by adding that she would only give that information to her business partner, and the sharks loved her instincts.

Robert asked Theo what his background was, Dad explained that he and D’Andra had over 40 years of experience between them in the areas of marketing, operations and finance. He confirmed that his wife was working full time for Beesweet, and he was too, although it called it his ‘second full-time job’.

Daymond John wanted to know what the $60,000 investment would be used for. Mikaila explained that the money would be utilized to increase production, and meet the demand for the planned expansion of the business, into the South West region.

Robert inquired where Beesweet lemonade was currently being manufactured. Theo disclosed that a local bottling plant in Austin, Texas was making it, although they envisaged taking on the manufacturing process themselves eventually. Robert asked what the cost of the product was and Mikaila told him it retailed for approximately $3, and cost $1.50 per unit.

Mark Cuban asked Mikaila what her biggest challenge in the business was. She told him she found running the business, as well as finding the time for school, very demanding.

Kevin O’Leary could see a solution to that situation, ‘School’s gotta go’ he told her, deadpan.

Mikaila didn’t look overly enthused at giving up on her education just yet, she gave Kevin a long hard stare before Lori broke the tension, by laughing at the terrible career advice.

Kevin did have a more serious point to raise. He asked the Beesweet pair if the total sales of $25,000 in over five years concerned them. Maybe the long hard look from Mikaila had got to Mr Wonderful, because Daymond had to correct his fellow shark, reminding him that the $25,000 in sales had been achieved in only the last year. Theo confirmed that, adding that since the companies association with Whole Foods, which had commenced only a few months earlier, sales had grown substantially.

Kevin was still a little rattled, he shared his view that $3 was a premium price for lemonade, he thought that was expensive. Theo explained that if they could scale production up, the cost could fall below $1 per unit. Daymond asked what amount would need to be produced to reach that figure. Theo told him that each production run would need to be at least 2,700 bottles in order to achieve the lower cost, with the new South West distribution plans in the pipeline, demand would rise far above that level.

Kevin O’Leary applauded Mikaila’s achievements and character, but he had a problem with her commitment. Everyone looked surprised at that, but Mr O’Leary explained. As the young entrepreneur wasn’t prepared to give up school just yet, and he needed a full time partner, he was going to pass up the opportunity of investing in the business, but he urged her to come back when she had put school behind her, and he would be happy to talk to her. But for now, Kevin was out.

Robert was next to speak. He thought the soft drink market was very competitive, particularly at the retail store level. He had little interest or expertise in the area and he was out too. He sounded a little apprehensive when he told Mikaila he wasn’t interested, perhaps because she was giving him one of her serious looks at the time, but the young shark accepted his rejection graciously.

Mark Cuban thought Mikaila was great, and that Beesweet was a nice start-up, but he didn’t see the business as a worthy investment at the current time. He told Mikaila to come back when she had graduated, and when she ‘would probably own half the place’. But for the present, he wasn’t interested.

Lori had great praise for the young entrepreneur, she told her that everything she had done with the business was right. But as Lori herself was allergic to lemonade, she was unable to try it for herself, and for that reason she wouldn’t be investing in Beesweet. She left Mikaila with the knowledge that in Lori’s eyes, she was very definitely a hero, and not a zero.

‘One shark left’ announced Kevin, and all eyes turned to Daymond John.

Daymond had some sweet news after the bitter taste of the other sharks rejections. He was involved with a major distributor to east coast convenience stores, and he had an offer to make. He would supply the requested $60,000 in exchange for 25% equity in the company, on the condition that his east coast distributor could get Beesweet Lemonade retailing in their stores.

Mikaila gave it some careful thought, and after a quick consultation with Theo, she accepted the offer with the words ‘It’s a deal’. It was clearly a popular partnership with the other sharks, who gave the new partners a round of applause.

BeeSweet Now In 2023 – The After Shark Tank Update

The deal with Daymond was eventually finalized after the episode aired and with his help, their business thrived. Within a few months, their sales had gone up 350%. In April 2016, they also secured a $11 million distribution deal with Whole Foods, which agreed to sell their lemonade at 55 stores in Oklahoma, Louisiana, Arkansas, and Texas.

That same year, Mikaila was invited to the South by Southwest Festival by Movement 50, where she was honored as a young innovator. She also had the opportunity to visit the White House, where she met President Obama and his family. That’s not all, she also visited Cape Town, South Africa, to speak with other inspiring female entrepreneurs about business ownership.

Fast forward to 2021 and they were given an update segment, which was included in episode 1206. In the follow-up, Mikaila, now sixteen, revealed that they have rebranded BeeSweet Lemonade to Me and the Bees and that their products are now available in more than 1,500 stores nationwide including Wegmans, Whole Foods, The Fresh Market, and hundreds of other retailers.

As of 2023, Me and the Bees is still up and running. If anything, they’re doing quite well with an annual revenue of $5 million. They currently offer five different flavors: Black Cherry Mint, Ginger, Prickly Pear, and Classic, all of which are also available on their website. For example, you can get a 10-bottle pack for $29. They also sell variety packs, which come with all of the different flavors.

Aside from lemonade, their online store also sells postcards, sticker sheets, t-shirts, tote bags, and hats. They also offer “Signed Bee Fearless Gift Sets”, which come with a signed copy of Bee Fearless, a part business guide, part memoir, by Mikaela, custom stickers, a vanilla mint flavor lip balm, and a honey lip palm. And shipping is free for all orders in the United States.

It’s also worth mentioning that their lemonade drinks are available on Amazon. In fact, they have received many positive reviews, with many praising the beverage for being delicious. One user even compared it to the fresh lemonade that their grandmother used to make.

Compared to their official website, however, the selection is limited on Amazon. As far as we can tell, they only have a couple of flavors listed on the site.