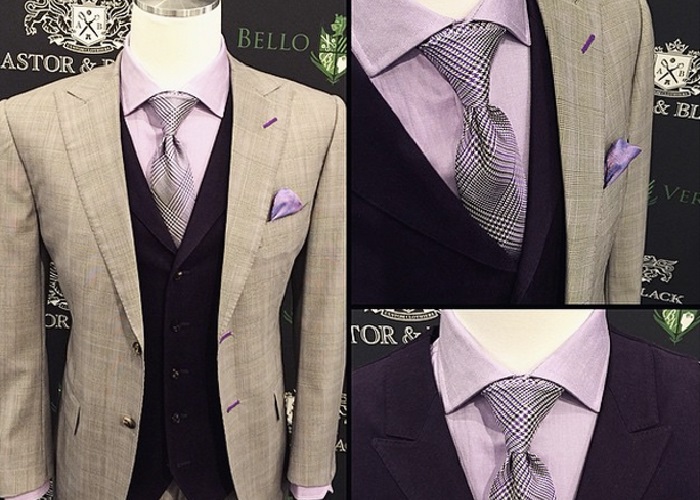 Everything sounds better when you say it in Italian, more exotic and alluringly mysterious. Bello Verde (Beautiful Green) founder Joe Chay was well aware of that fact when he named the company, because if there’s one thing that Joe Chay knows a lot about, it’s selling things.

The road that led to Joe eventually meeting the sharks for a pitch they would never forget began in 2011. At the time Joe was the Chief Operating Officer at custom clothiers Astor and Black, but things changed in October of that year when the company was sold to private equity investors. The new owners moved from Columbus, Ohio to Pembroke Pines in Florida and Joe found his responsibilities reduced. Feeling that his new bosses wanted to bring in their own people, and also aware that Astor & Black had left many loyal customers behind in Ohio, Joe decided to go back to Columbus and start his custom clothing business.

Joe launched Bello Verde in October 2012 and reaped the benefits of relocating back to Ohio almost immediately. He had a wealth of experience in sales, operations, training and negotiations from his time at Astor & Black, and used them to great effect. He picked up most of Astor’s former customers who had been left without a custom clothing service, and his start-up was profitable from day one.

It proved to be a wise move by Joe in more ways than one, in October 2013 Astor & Black filed for bankruptcy. Joe believed that the new owners had increased overheads and used a poor branding strategy, leading to increased prices and declining sales, During that same year, Joe had achieved an excellent first twelve months with Bello Verde, and he knew the well-known Astor & Black brand could add prestige and value to his business.

Joe bought Astor & Black in a lifesaving move for his former employer, and he set to work scaling the business up to a nationwide service. Eventually his need for added investment found him pitching to the sharks, in January 2015.

Joe began his audience with the sharks by announcing he hoped to get a shark partner to invest $360,000 in Bello Verde, in exchange for 6% equity. It was a huge valuation and the sharks looked doubtful from the off, but Joe Chay is an extraordinary salesman, and in the dramatic, passionate style of a general sending his troops into battle, he pushed Bello Verde as the epitome of style and sophistication. He was suddenly joined by a couple of models wearing Bello Verde suits, none other than former Superman Dean Cain and MMA Champion Urijah Faber.

The sharks were impressed with the sudden celebrity guests, and seemed to be warming to Joe’s motor mouth style, at least a little. The sharks chatted with Dean and Urijah a little and things seemed quite relaxed, but for Joe Chay things were about to quickly unravel.

The subject of Astor & Black came up and Joe launched into a long rambling explanation of his former employment at, and subsequent purchase of the company. Joe waffled a lot, and talked fast, but most of all, he didn’t let the sharks interrupt him, at all. The next ten five minutes were spent with all the sharks attempting to get a question in, and then listening to an overly complicated answer that frequently veered off into other subjects. It wasn’t that Joe lacked passion, he just had far too much of it, but sadly he lacked the ability to see that the sharks were beginning to get annoyed with his endless monologues.

Things started to get really tense when Kevin O’Leary asked Joe how much Astor & Black would make that year, Joe unwisely responded by asking Kevin how much he thought they would make. Kevin slowly began to explode with anger, it was a graual build up, beginning with ‘I have to answer that?’ and culminating in an angrily hissed ‘Are you an idiot?’, Lori almost had to hold him back, even Urijah seemed slightly concerned at Mr Wonderful’s angry frustration. Superman took a step backwards.

Robert Herjavec eventually got the answer Kevin required. Joe revealed that Astor would make $2 million sales that year, with about $500,000 profit. They were impressive sales figures, but still far less than the valuation demanded, Kevin wasted no more time, he called the valuation ridiculous and asserted his hope that Daymond would beat the motor-mouth entrepreneur ‘with a stick’ in any deal, and unsurprisingly Kevin was out. Lori quickly followed his lead by simply saying ‘I should not be in the custom mens suit business, I’m out’.

Robert Herjavec admitted that there was a good market for custom tailors, among certain demographics. He gestured to Kevin and said ‘Guys like this, with weird bodies, funny shapes’. Kevin was happy to banter now he had rejected the fast-talking entrepreneur, ‘Adonis bodies require a custom tailor’ he replied. Robert continued as Lori laughed, he asserted that custom tailors were ‘everywhere’ and that he found the strategy of keeping two brands ‘confusing and messy’. For those reasons, Robert dropped out too.

Joe had been respectful and appreciative of each of the sharks as they had rejected them, for once he had been fairly quiet and had seemed to accept the loss of potential investors without argument. Mark Cuban began to speak, it was clear that he was not greatly impressed with Joe or the Bello Verde business, but his exact opinion was lost to a sudden flurry of activity from the entrepreneur. Joe interrupted Mark several times, and refused to let him speak. Eventually Mark was reduced to shouting ‘JOE! JOE!’ until he got his attention, he then put his finger to his lips and gave Joe a ‘Shhh!’ before quickly finishing his point and dropping out too.

Daymond John, the fashionable founder of FUBU was the only hope left for Joe, and he was the natural choice as the most suitable shark for the Bello Verde business. He had an offer to make, and he promised Joe that it was so sweet that it would give him a cavity. Kevin couldn’t resist chipping in ‘And it’ll be just as painful’.

Daymond’s offer was that he would supply the $360,000 investment, but only in exchange for 33% equity. Joe looked horrified and announced that 33% was ‘far off’ what he could accept, when prompted by Robert he offered Daymond 7%, and the Sharks laughed heartily.

Daymond suggested that Joe make a reasonable counter offer. Joe waffled on to the obvious frustration of the sharks. Eventually Daymond became the third shark to shout loudly at him, urging him ‘Come on, Get it Out!’ before Joe finally suggested 8% equity was the most he could offer. Daymond suggested he would be happy with 25% but Joe refused to budge from 8%, stalemate had been reached, and after bidding a hearty goodbye to the sharks, Joe left the tank behind, to a blessed and much appreciated silence.

‘What an Idiot’ observed Daymond. Kevin remarked that he had never seen an applicant that talked so much, and said so little.

Bello Verde Now In 2022 – The After Shark Tank Update

Joseph might not have landed a deal with the sharks but he did receive a considerable amount of exposure from the show. After the segment aired, the number of appointment requests that he received went up ten-fold—from 2 to 3 per day to 20 to 30 per day. Needless to say, they did get something from being on Shark Tank.

Fast forward to 2022, and the company is still up and running. At least, that’s what it looks like seeing as how their website is still online. Their social media pages, however, haven’t been updated since 2016 and that includes both their Instagram and Facebook accounts.

Nothing seems out of the ordinary on their website, however. In fact, customers have left reviews on Google over the past couple of years, which means that they are still operational. Feedback hasn’t been very positive, though (they currently have a 1.8-star rating out of 10 reviews). For example, the most recent review from five months ago gave them a one-star rating with the comment “comical”; it also received two thumbs up from other users. Another user also gave them a one-star rating, saying that the experience was “absolutely horrendous” from day one—that they had delivered an inferior product with horrid customer service.

As far as we can tell, their business model is the same as when they were on the show. That is, they will still come to your office or home to determine the perfect fit for the suit. More specifically, they’ll use their “30 Point Fit Profile”, which includes photos, measurements, and fitting notes, to complete the process.

Once all that is done, you can choose your fabric and any embellishments. Depending on what you pick, the suit can cost anywhere from a few hundred dollars to a few thousand dollars. At the end of the day, it all depends on what you pick. Still, many would agree that it’s a worthy investment seeing as how it’s custom-made to your measurements and style.

For those who are interested, you can check out their official website here. Aside from custom-made suits, they offer a variety of accessories as well such as shoes, cuff links, lapel pins, belts, bags, sweaters, and more. The only thing is that they don’t have a catalog; you’ll probably have to contact them to see what’s available. There’s also a process page that outlines how it all works if you’re curious.

Keep in mind, however, that their collections section hasn’t been updated since 2016 (interestingly enough, it’s around the same time as when they stopped updating their social media accounts). We’re not sure if this means that they’ve stopped producing new styles or if they simply haven’t updated their website. In any case, you can always message them and ask. Just fill out their contact form and hopefully, their team will get back to you as soon as possible.