Seth Friedman and Justin Koehneke are the creators of Bottle Bright, and have come to the Shark Tank to seek an investment of $75,000 in exchange for 15% of their company. There are all kinds of portable drinking containers that make everyone’s life easier, but the problem is that they develop stains and odors easily. The typical method for cleaning bottles don’t work well, either, and dishwashers actually cannot spray into narrow opening. Many drinking containers aren’t dishwasher safe, even; chlorine, bleach, and other harsh chemicals are toxic and dangerous. So, Seth and Justin became frustrated with the lack of cleaning methods and chemicals available to clean their water bottles, so they began to look for a safe and effective method, which lead to the creation of Bottle Bright.

Bottle Bright is a cleaning tablet that is amazing at removing stains and odors from portable drinkware, and is insanely easy to use; simply fill your bottle with water, drop in a Bottle Bright tablet, and let the tablet go to work. When the tablet stops fizzing, let the bottle sit for five more minutes, then simply discard the entire solution and rinse your bottle out a few times. After that, your bottle is fresh and clean, just like when it was brand new! With the help of the Sharks, Seth and Justin can solve the dirty bottle dilemma all over the world.

While Justin passes out samples, Lori points out that Bottle Bright is just like Efferdent for a bottle. Efferdent is a seltzer used to clean dentures, but Seth points out that the biggest difference is the fact that Bottle Bright is all-natural. Barbara asks what is contained in a tablet, which Seth replies that they are all-natural ingredients which are mineral or organic based. There is no odor afterwards or residual smell. However, Kevin voices his thoughts; he imagines that there is very little sales since nobody gives a damn about the product. However, Seth says, people do give a damn, but they just don’t buy the product.

Lori and Kevin press for details about sales, which Justin says that in the last year, they had a revenue of $110,000 and in the year-to-date, they have made $85,000 so far. The Bottle Bright has been available for 3 years, which started as a business directed towards private label customers. Seth and Justin dealt with two large companies that are now privately working with the pair in order to produce Bottle Bright. Robert points out that there is no actual brand behind the product, which means that Bottle Bright is simply being used as part of the final product. This means that Robert would purchase the private label company, and Seth, Justin and Bottle Bright would just happen to come along with the acquisition. Seth and Justin confirm this, as they are actually the ones responsible for creating the physical tablets to be sold; Kevin dryly remarks that he can imagine the two are making hundreds of thousands working to produce tablets.

Lori then shifts focus to costs, and Justin starts by saying that the ten-pack pouch is made for $.79 and sold at a wholesale price of $2.99 to a retail store, where it is then sold to the customer for $5.99. Then, Lori asks how the two came up with the Bottle Bright product; what is the story behind the two men that created the product? Justin starts by saying that the two of them are mountain bikers, and they use hydration packs (backpacks with built-in water tanks and a long straw), but one day, Justin noticed how disgusting his water had begun to taste. The packs are nearly impossible to clean, and Seth voiced his concern to Justin; Seth lives a healthy lifestyle, but he has to clean out his pack with bleach and began to slowly kill himself. So, they started out on a business venture that would eventually become Bottle Bright.

Robert refocuses on sales; they have received $110,000 in sales, primarily to private label, but Robert asks about the profit and gross revenue from the venture. Justin reveals, so far, they have not made any money. 2013 was a bad year, and thanks to the loss of $100,000, they have leveled out to virtually no income. Justin tells the story of the lost $100,000; in July of 2013, they executed a huge order for the private label company, and they were trying to push the boundaries of ecological packaging. The private label company wanted a film, which would contain a Bottle Bright tablet, to be biodegradable. Seth and Justin sent the company a large amount of product, but there was a moisture vapor that began to penetrate through the film packaging and began to degrade the tablet, which meant that Seth and Justin had to perform a recall of the entire order.

Kevin says that the two behind Bottle Bright are extremely lucky to have met him today, and he explains why; Kevin is a cleaner, and he cleans awful ideas right out of the Shark Tank. They have spent over 3 years developing the product and have made no profit, yet the two of them still claim to be entrepreneurs. At some point, a successful entrepreneur understands that they have a “loser of a business” in front of them, and with Kevin’s favorite analogy, “you take it out back and you shoot it.” Kevin then makes an offer for the two of them to think their business over thoroughly, and hopefully they end up “shooting it,” but Kevin (un?)gracefully exits the deal first.

Robert then voices his challenge with the product; Seth and Justin have not proved that there has been any demand for the product. Anybody that truly cares enough about cleaning their water bottle already has a solution, and while Bottle Bright might potentially be doing a better and easier job of cleaning, breaking into the market and forcing the consumer to acknowledge your better product is a monumental task. Robert is also out of the deal, leaving three Sharks remaining.

Lori asks what the two intend to do with the $75,000, and with this investment, Justin replies that they will invest in better administration. However, Lori says that the worst waste of money, for her, is for that money to go towards administration; when there are two “firecrackers” who should be out there, burning the midnight oil, they should be serving as the best administration that the company will ever see. However, Justin says that he is open-minded to any ideas from a Shark on how the investment should go. Barbara points out that there is a larger issue for her; the two of them have created an enormous mistrust when they brought up the fact that they lost $100,000. While nothing is wrong with losing $100,000 in year 1, everybody likes to see sales and traction move up, so Barbara exits the deal. 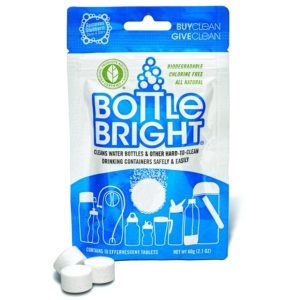 Mark points out that the two of them had a great idea, turned into a good product, but what they do not yet have a company, and they actually come across is being desperate. Everything that the two of them has done has come across as desperate, almost as if they are drowning and desperate for a lifeline to come and save them. However, Justin says that passion drives desperation, but Mark says that he can sense a difference between passion and desperation. Mark is out of the deal as well.

Lori is the final Shark remaining, and she says she does not agree with a lot of the comments made by other Sharks; she sees Bottle Bright as a solution to an upcoming product, so she intends to make an offer. Lori has an initiative with Bed, Bath and Beyond currently, and can bring the product to other stores. Lori then offers the asked-for $75,000 in exchange for 35%, and the contingency that the money will go towards funding purchase orders and NOT towards administration. There are direct targets and goals that Lori has in mind – Lori has sales numbers already in her mind, as well as various stores that she would like to move the Bottle Bright product to. She can also sell the product on QVC, which will help to get free advertising for Bottle Bright when viewers of the channel walk into Bed, Bath and Beyond.

While the two of them appreciate the offer, they make a counteroffer of $75,000 in exchange for 25%, which prompts Kevin to let out a laugh. Lori brings her offer down to 33 and a third percentage, which the two of them eventually accept. While the other four Sharks exited in quick, precise fashion, Lori made an investment in the business.

Bottle Bright Now In 2022– The After Shark Tank Update

The pair walked away with a $75,000 deal from Lori, which was finalized shortly after the episode aired. If anything, it played a huge role in the company’s subsequent growth.

In 2016, Bottle Bright was acquired by Hydrapak, a California-based company that specializes in various types of water vessels. Not long afterward, they were given a brand new website with a new ‘About Us’ section.

As of 2022, Bottle Bright is still available for purchase. You can find the tablets (a pack of 12) on HydraPak’s official website for $8.00. Not only is U.S. shipping free with orders above $45, but they also offer 30-day returns as well as a lifetime guarantee.

Alternatively, you can get them from retailers such as Bed Bath and Beyond (in-store only). They’re also available from Amazon (there are three options—you can get a 12-pack, 36-pack, or 78-pack), where they have a 4.5-star rating out of more than 31,000 reviews. Needless to say, they’re quite popular on the site.

Looking at some of the reviews, most customers seem to agree that the tablets are great for deep cleaning bottles, tumblers, and mugs—that they’re excellent at removing even the toughest of stains. They’re also easy to use, which makes them that much more popular. In fact, many people were so impressed that they shared before and after photos on the site.

As with all products, however, there are some negatives mixed with the positives. For example, some people wrote that the tablets only removed a portion of the buildup and that they weren’t able to get rid of them completely. Others were satisfied with the product itself but were dissatisfied with how it was shipped and delivered (e.g. tablets were crushed upon arrival).

So, what are the entrepreneurs up to now? According to his LinkedIn profile, Justin currently works as an Email Marketing Specialist at Heymaker, a company that he founded back in 2020 to help vegan brands connect with their audience on a more personal level. Prior to that, he was a Website Manager/Content Marketer at Crane Brook Holdings, a position that he held from 2018 to 2020. At the same time, he was a Sales Funnel Designer with Upstream Logic.

As for Seth, we couldn’t find any recent information about him. As far as we can tell, he doesn’t have a LinkedIn profile so it’s hard to know exactly what he’s been up to. With that said, we wouldn’t be surprised if he still works in the renewable fuel industry. That, and he probably still goes for regular bike rides in the wilderness with Justin. That’s what prompted them to create Bottle Bright, after all (if you remember, they said that their water bottles would often get dirty after biking).