In 2008, a student named Pete Kistler couldn’t get a job as a computer programmer. Was he under-qualified? 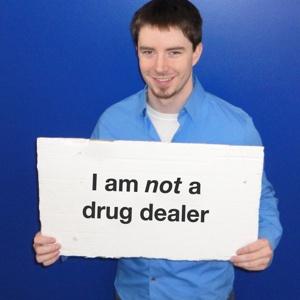 Was it the job market? He couldn’t figure it out. Before long, he figured out that when hiring managers would search his name online, they’d find a drug dealer instead. This cost him real job opportunities. Pete and two classmates from Syracuse University, Patrick Ambron and Evan McGowan-Watson decided to do something about it.

In March of 2012, Pete, Patrick, and Evan founded BrandYourself. As an “online reputation management” tool, or ORM, BrandYourself helps businesses and individuals push down unwanted search results by using positive content. The idea wasn’t a new one, but it did take the online reputation market to a new customer. The non-tech-savvy individual who couldn’t afford a professional agency suddenly had a solution.

In the last several years, BrandYourself has made remarkable progress. As of May 2012, it had twenty-five thousand free users and one thousand paid subscribers. By the date of filming in mid-2014, these numbers had grown to three hundred thousand free users, five thousand paid subscribers, and five hundred users with custom concierge contracts. All signs pointed to success for BrandYourself, but it needed help to fully break into a new market. With investment from a shark, it could begin competing directly with full-time professional firms by hiring enough employees to accomplish everything in-house.

Patrick Ambron, one of BrandYourself’s three founders, made the pitch. For two million dollars, Patrick offered thirteen-and-a-half percent stake in the company, a valuation of roughly fifteen million dollars. Everyone commits the occasional minor indiscretion. This isn’t necessarily who they are, but on the Internet, things can appear that way. Patrick explained the problem with “Bob”, an Ivy League valedictorian who couldn’t get a job because of some embarrassing vacation photos. BrandYourself walks a user like Bob through the process of evaluating their online presence, diagnosing any problems, and suggesting custom solutions. These may include include proper tagging, publishing original content, and mentions on high-ranking third-party sites.

The sharks all raised their eyebrows at Patrick’s valuation. Kevin got down to brass tacks. “How do you make money?” Patrick answered that BrandYourself was a primarily free experience in order to bring in users. For greater functionality, someone could upgrade to premium for ten dollars per month. In 2013, BrandYourself launched a concierge service, a solution meant for larger businesses and executives, in which someone could create a custom contract to suit their needs.

Patrick went over some key user metrics with Robert, emphasizing the company’s growth in recent years, as 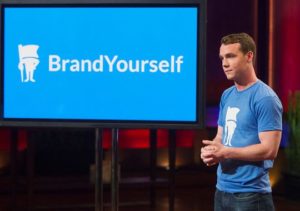 Mark was concerned about social media. Not all social media posts make it into search results, but they are still easy to locate through individual profiles. Patrick answered that his team was researching the issue but had not yet launched a solution, which concerned Mark and Robert. Kevin was worried about differentiation. He had used similar services for his own businesses. Was BrandYourself’s niche as a low-cost provider? Patrick replied earnestly that they were bound to be an industry leader because of the quality of their service. They were offering a better product. This didn’t sit well with Robert or Kevin. “Leaner and meaner” isn’t different. Unable to invest at the current valuation, Kevin backed out.

Daymond was the next to go. For him, there was no problem with the business, but he didn’t know the space well enough. He wasn’t willing to risk two million dollars on something he didn’t understand. With Daymond gone, Patrick brought up the elephant in the room. Their total revenue to date didn’t begin to approach the total valuation. Fifteen million dollars was seven times their projected revenue in 2014. Patrick admitted that he was setting the value at this amount because of a partially finished series of funding. BrandYourself had raised three million dollars at this rate already, so he came to the sharks with the same value out of fairness to the other investors.

Lori admired Patrick for his ability to hustle, but it wasn’t working for her. She had seen the advertisements from BrandYourself’s competitor (which was probably a reference to Reputation.com.) She knew the scope of their advertising budget and feared what it would take for a competitor to match them. She bowed out. Only Mark and Robert were left. “The two tech guys,” said Daymond.

Mark spoke up first. He agreed that the size of our digital footprint is a real modern concern. However, he felt that BrandYourself would struggle to adapt to shifting technology. As the dependency on social media in hiring grew, relative to raw search results, they would need to find a solution quickly. Mark felt that Patrick was valuing the business as if he already had this solution. Because of this disconnect, he went out.

Only Robert remained. To the surprise of several sharks, given his concerns over the valuation and the lack of social media functionality, he had positive things to say. “I like it…I think that there’s a very large business for consumers that may not be computer-savvy.” Because of BrandYourself’s growth, Robert wanted in, but not at Patrick’s value, which he called “nuts”. Robert made an offer he was comfortable with, two million dollars for twenty-five percent. Patrick was nervous. He mentioned again that he was not very flexible because of the other investors. Robert pressed the issue. While he admired Patrick for sticking to his guns, he cautioned that it was a risky move.

Kevin couldn’t believe that Patrick hadn’t accepted immediately. In his eyes, even an eight million dollar valuation was generous. Robert gave some insight into his offer. He knew that he wouldn’t make his money back in a year or two, but he thought BrandYourself had the potential to grow to a fifty or one hundred million dollar company. For now, he was dangling the carrot, but he could pull it away at any moment. Kevin urged him to retract the offer on the grounds that, with his experience in security, he could build the same business himself. When Patrick asked to make a call, likely to another co-founder or investor, Robert proved he was serious. He wouldn’t accept further negotiations, and twenty-five percent was his final offer.

Sweat was visible on Patrick’s face, as he struggled to find an answer. Finally, he stood his ground. “I can’t accept it. But that two million dollars would go a very long way…” “Don’t worry, it’ll go a long way for somebody else who’s gonna get it right after you leave,” Kevin chimed in. “So, turn around please,” he said dismissively. Patrick slumped out of the room, disappointed. Before leaving the room, he turned around, as if he expected Robert to beckon him back into the room after a change of heart. But sadly, the deal was done. Or not done, rather.

In retrospect, BrandYourself was not a bad business, but Patrick brought it to Shark Tank at the wrong time. There is a difference between the average high risk venture capitalist and the investors on Shark Tank. Their valuation tends to focus more on sales validation than market trend analysis. While other investors are comfortable investing on hype alone, it wasn’t right for this program. Of course, both approaches are valid. Everyone wants to get in on the ground floor of the next Facebook, but these businesses often go the way of Twitter. They blow through capital, constantly rotate in new management, and never once make a profit. The uncertainty of BrandYourself’s social media strategy, combined with its hype-driven value, was a hard sell.

Despite not landing a deal, the company continued to grow. For one thing, the “Shark Tank effect” alone, had led to more than $1 million in sales, which was a significant boost compared to what they were doing before.

As for why Patrick rejected Robert’s deal (it was one of the biggest offers made on the show at the time), he revealed in a subsequent interview that “while [Robert] was the right Shark, his deal wasn’t the right deal.” He also added that they had just raised money, which doubled their company value prior to being in the tank, and for that reason, they couldn’t accept the offer out of fairness to their investors.

The company also grew between the filming of the episode and it appearing on television in 2014. At the time of filming, the company had made $2 million in revenue, but by the time their segment aired, it had tripled to approximately $6 million. Not only that, but they also expanded their employee roster from 40 to over 70.

Later in 2016, the company announced an extension of their Series A, after raising an additional $2 million in funds, which was backed by Barney Pell, New Atlantic Ventures, and FF Angels. Around that same time, Patrick stated that the company was already profitable and that he wanted to use the extra capital to expand the company’s product lineup.

By May 2017, the company had more than 500,000 users and 30,000 paid subscribers. Johns Hopkins University and Syracuse University also began using the platform for their students. Not only that, but they also started to offer the service to high school students as they prepare to apply to universities and colleges.

Fast forward to 2018 and the company was featured on BBC’s Dragon’s Den, where they accepted an offer from Peter Jones. That same year, the company introduced a new AI software that’s capable of scanning an individual’s social media account to detect any photos, comments, and posts that can be viewed negatively. Allegedly, it uses the same technology and algorithms used by employees to alert users of problematic content. By the end of the year, their user base had grown to approximately one million.

As of 2023, Brand Yourself is still up and running with more than 70 employees and annual revenue of $7 million. Needless to say, the company has grown significantly since their Shark Tank days. They might not have landed the deal that they’d wanted on the show but at the end of the day, they were still able to accomplish their vision with help from other investors.

For those who’d like to learn more about the platform, you can check out Brand Yourself’s website here. Or if you want, you can follow their social media accounts for the latest news.