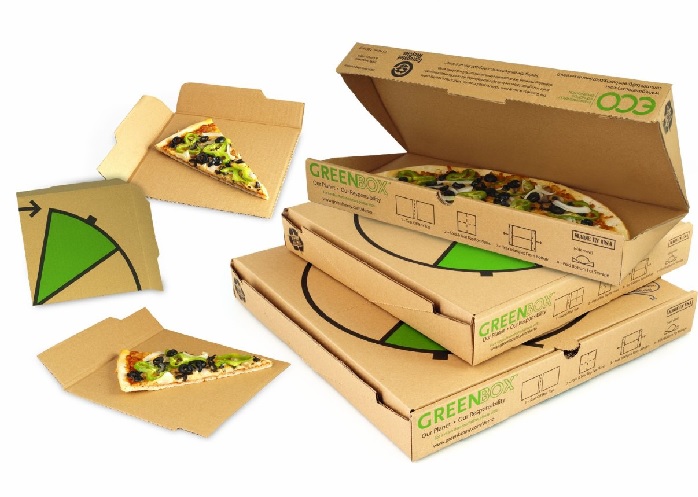 William Walsh, the inventor of GreenBox, came up with the idea while living in a fraternity house on a football scholarship. After a few hours of cutting up hundreds of pizza boxes, which was not an unusual activity for him, he hit upon the idea of making a customized box that could be manufactured to break apart into a more useful set of items. The top could be converted into four disposable plates, and the bottom was easily changed into a box for leftovers.

William was awarded a utility patent for his original design and teamed up with friend Ned Kensing to launch the GreenBox business. Another friend of William, Jen Wright-Laracy, had recently gained an MBA in Finance from the Colombia business school and was looking for a business opportunity to further her own entrepreneurial ambitions. Jen was approached by the business partners and invited to join the new enterprise.

The GreenBox business was launched in 2008 and was soon off to a dynamic start. Jen created a business plan and had soon managed to attract $50,000 in bridge funding for the start-up. The company got a sudden unexpected boost in fortunes when actor Ashton Kutcher used the relatively new social media platform Twitter, on which he was a major early influence, to promote the GreenBox. Following Ashton’s nod of approval to the company, sales went through the roof

The innovative and environmentally friendly product received further accolades and best-invention citations. It was included in Time magazine’s 50 Best Inventions of 2009, as well as Restaurant Business Magazine’s 50 great ideas list in the same year.

Unfortunately, William Walsh died suddenly, aged just 44, in November 2011. It was a difficult time for Ned and Jen, William had been a good friend as well as a co-partner to them both, but they saw his untimely death as a hurdle to overcome, knowing that he would want them to continue with the business, and bring his innovative idea to the World.

Ned and Jen appeared on Shark Tank in January 2015. The pair were seeking an investment of $300,000, in exchange for 10% of the GreenBox business.

The pair introduced themselves to the sharks and Ned launched into the pitch, or rather he tried to launch into the pitch, but he completely froze. He started again, but failed to get more than a few words out before choking up again, the pressure had clearly got to him.

‘It’s the most important moment in your life’, remarked Kevin O’Leary, somewhat unhelpfully, ‘Shut up Kevin’ replied Mark Cuban with a smile.

‘If you want it done properly, get a woman to do it’ suggested Robert. It sounded like a good idea so Jen began the pitch, but her partners nerves were contagious, she also lost her footing after a single sentence. That was enough for the already amused sharks to burst into laughter, and soon everyone was laughing.

The round of laughter broke the tension and finally Jen managed to get the pitch going. She explained that people liked pizza more than sex, but there was an age-old problem with the Worlds favorite food, and that was the huge and cumbersome pizza boxes that were too big to fit anywhere. She revealed the GeenBox, and Ned demonstrated how easy it was to convert the product into a few cardboard plates and a small box for that spare slice or two. Ned’s quick demonstration impressed the sharks, and Jen asserted the GreenBox had mass appeal as well as being made from 100% recycled materials.

The sharks were impressed, it had been a great pitch when it had finally started, and Ned’s practised demonstration had met with approving comments too. Robert Herjavec asked about the background of the business. Jen explained that there had been two phases to the business plan she had developed, firstly to prove the concept of the product, which she believed had already been achieved, and secondly to gain a licensing deal with a major pizza chain. She revealed that GreenBox was now distributed by WholeFoods, in half of its operating regions and had a number of other smaller distributors involved nationwide.

Lori Greiner asked if the GreenBox had a patent. Jen confirmed that it had been awarded a full utility patent and Lori was impressed, she asked what level of sales the company had achieved so far. Jen told her that total sales had been in excess of ten million units, and all the sharks expressed admiration. Robert inquired what sales had been made in the last year, and Jen revealed that the company had sold 1.7 million individual boxes in that period.

‘Awesome’ remarked Mark Cuban, looking as impressed as all the other sharks. So far things had gone well for the GreenBox entrepreneurs, but their fortunes were about to change in the tank. Robert Herjavec asked how much each box would cost a major chain, if they were to licence the product. ‘A fraction of a cent’ replied Jen confidently, but Kevin O’Leary was about to bring the interest down a notch, as well as Jen’s confidence.

Mr Wonderful revealed that he was a shareholder in Boston Pizza, a medium-sized chain with over 650 outlets, and he had encountered a similar product before, although he admitted it hadn’t been quite as innovative as GreenBox. The problem in his eyes was that a major chain, selling countless millions of pizzas, would be unwilling to take on any added costs, particularly if there was no corresponding increase in sales. Jen pointed out the eco-friendly advantages of the GreenBox and assured him that major chains would love the positive PR of using the box, but Kevin felt that it would require even more expenditure to advertise the environmentally friendly benefits of the product. Jen countered that major pizza chains already spent millions on advertising, and Kevin conceded she had a point.

Mark Cuban had looked somewhat interested before, but Kevin’s observation had sowed a seed of doubt in his mind. Mark told Jen and Ned that the huge quantities of pizza sold by the big players in the industry, would make the added cost of the box highly unattractive, and because of that, he was out.

Kevin asked if the pair had spoken to Dominos yet. Jen admitted they had tried but had been unable to make a pitch to the huge chain. Kevin told her he had contacts in the company, and furthermore, he was prepared to make an offer, but as usual with Kevin, there were contingencies attached to it. The condition was that he could successfully negotiate a licensing deal with a major chain, if that was achieved he would supply the requested $300,000 in exchange for 10% equity, but he also wanted the $300,000 repaid from the royalty streams.

Jen and Ned looked pleased to have received an offer, but Lori had some more good news for the pair. She announced that she and Robert were prepared to join forces in a deal. They would also supply $300,000, but they wanted 30% equity in the business between them. She assured Jen that in this case two sharks would definitely be better than just one, they would be behind the company the whole way and were confident of securing a licensing deal.

Barbara Corcoran remarked that the two deals were so wildly different in terms of equity that it was no real competition. Lori defended her deal, asserting that Kevin was expecting his $300,000 investment back as soon as royalties began coming in, so the deals weren’t actually all that different after all. Barbara confirmed that she wasn’t prepared to make an offer, stating that she didn’t believe in the concept of the product.

After a quick whispered conversation Jen and Ned thanked Lori and Robert for their offer, but confirmed they would be accepting Kevin’s deal. As the entrepreneurs left the tank, the other sharks remarked that anyone must be mad to go into partnership with Mr Wonderful willingly. Kevin smiled happily, and told his fellow sharks that they were just lacking his creativity.

GreenBox Now In 2023 – The After Shark Tank Update

As far as we can tell, the deal with Kevin was never finalized. Despite that, Ned and Jen continued to operate the business, which grew steadily. The free publicity that they received on the show helped as well.

While they weren’t able to land a licensing deal with any major pizza chains (including Kevin O’Leary’s Boston Pizza), they did sign a deal with a medium-sized pizza chain in Boston.

By 2016, a year after appearing on the show, their sales had increased by nearly 40%; this allowed them to ramp up production of their boxes. With that, they were able to strike a number of deals with Cumberland Farms, Quiktrip, Whole Foods Market, and several other regional chains. At one point, more than a thousand locations were using their product, according to Jen.

And in March 2016, the company was featured on Henry Ford’s Innovation Nation. This gave the company even more exposure. They also promoted the product at a number of trade shows, where they highlighted the box’s environmental benefits and innovative design.

By 2019, the company was everywhere. Not only were the boxes used in pizza chains across the country, but many colleges such as Purdue University also started using them at their on-campus pizzerias.

A year later, they announced on Facebook that the business had been acquired by Pratt Industries, one of the largest corrugated packaging companies in the US. However, they emphasized that their crew will not be going anywhere – that they’ll be continuing to operate the business in-house at Pratt Industries.

As of 2023, GreenBox is still in business. From what we can tell, they’re still being used by pizza chains across the country – the only difference is that they now operate under Pratt Industries. However, we have noticed that their website is down with an error of sorts. Perhaps they’re in the middle of remodelling the site? Only time will time. Hopefully, it will be sorted out soon.

For those who’d like to see what they’ve been up to, you can check out their official Facebook page (@GreenBoxNY). While it isn’t updated regularly (the last post is from April 2022), you can get an idea of what they’ve been doing by reading their past posts. They also have an Instagram account (@GreenBoxNY) if you want to follow them there.