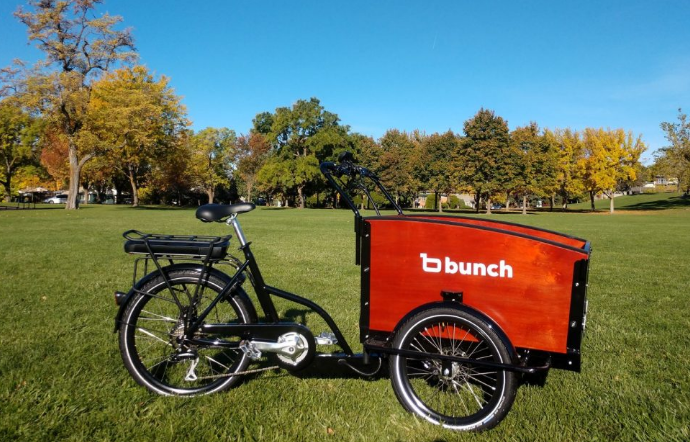 Aaron Powell started Bunch Bikes after a family trip to Malmo, Sweden in 2016. A life-long bike enthusiast, he had fallen in love with their cargo bikes and their bicycle culture in general. Upon returning home, however, he found that there weren’t any reasonably-priced cargo bikes available in North America. So he decided to make some himself.

By 2017, he had started to sell his own cargo bikes, which he named the ‘Bunch Bikes’. While things went well, he knew that he would need some national exposure if he wanted to bring the cargo bike lifestyle to the U.S.

That was when one of their employees, Juli (who also happened to be a huge Shark Tank fan), suggested that they apply to be on the show. It took a while but Aaron eventually caved and filled out the online form, partly so that she would stop pestering him about it. He never expected anything to come from it.

To his surprise, however, he received the first casting call a few months later. Realizing that he was now up against 30,000 other applicants, he got to work. He put together a short video of himself pitching the company while riding his bike with his kids, which he admits wasn’t an easy feat. But it worked. It got the producers’ attention and within a few weeks, they were accepted. They were told their film date and right away, they started prepping for the show.

Due to the pandemic, however, there was some uncertainty as to whether or not they would be able to film the season. Not only was LA under lockdown, but the studios weren’t open for filming. Fortunately, they were able to proceed with the show after moving the set to The Venetian Hotel in Los Vegas. Wanting to avoid air travel, he decided to rent a cargo van to transport his Bunch Bikes to the set. Arriving well ahead of his film date, he practiced his pitch continuously while he spent time in quarantine.

Bunch Bikes was later featured in the 18th episode of the 12th season.

Pushing one of his cargo bikes, Aaron enters the tank. He introduces himself and lets everyone know that he is seeking $250,000 for 10% equity. Jumping into his pitch, he states that biking is a great way for families to enjoy the outdoors.

He spends the next couple of minutes comparing the Bunch Bike to a regular bike trailer—that instead of having your kids at the back, you can have them at the front where you can see them. He also emphasizes the size of the cargo box—that “there’s enough room to bring everything you need”. As he says all this, a video plays on the screen.

He asks the Sharks who’s interested in trying the bikes and Barbara raises her hand. Aaron immediately invites her down to try the Bunch Bike. Pointing to the red one, he says that he will be putting ‘Kevin’ (a mannequin with his face) on the bike with her. Dropping the Kevin mannequin onto the floor, Barbara insists that they put her mannequin in the bike instead, which they end up doing. Hopping into the back seat, she then begins to pedal the bike around the tank with her mannequin counterpart sitting at the front.

She mentions how stable it is and Kevin asks from his seat whether or not the bike is assisted electrically. Aaron tells him that there is an electric assist as most of their customers aren’t experienced bikers. He also adds that it has parking brakes.

Daymond goes on to ask whether or not the bike can be taken apart for transport. Aaron tells him no—that the main advantage of the bike is its large cargo box, which can be used for almost everything. Lori then asks about the size of the shipping box.

Aaron replies by saying that they only ship the bikes fully assembled so the box is quite large but that it works well for them as they use a motorcycle shipping company. Asked by Daymond about the actual price, he reveals that the bikes cost $450 to ship, but that it’s still cheaper than delivering them with big cardboard boxes, which would require the customer to assemble the product.

Barbara then asks about the price of the bike. Aaron explains that they have two models, one that’s priced at $4,295 and another that’s priced at $6,000. The high costs surprise the Sharks but Aaron reasons that they’re going for premium quality on the market. Asked why he invented the bike, he reveals that he didn’t actually invent the bike. He goes on to talk about his trip to Sweden and how he and his family had enjoyed riding cargo bikes while they were there. He also reveals that he had sold his last business for $300,000 and had put $85,000 into Bunch Bikes.

Asked whether or not he’s a licensee, Aaron says that he had wanted to prove that there’s a market by starting small—that he had gotten one bike from a factory that was already similar bikes for the European market and that it had garnered a lot of interest on social media.

Repeating the price of the bike, Robert goes on to ask about the manufacturing costs. Aaron explains that he gets the $6,000 bike for $2,917. But that doesn’t seem to impress him too much as there’s no proprietary technology involved. Aaron counters by saying that they’re the only ones that are able to produce bikes like this in the U.S. and Canada.

He reveals that they’ve done $2.7 million in sales so far—$285,000 during their first year, $1.1 million last year and that they’re on track for $2.2 million this year. While he’s impressed, Mark states that there’s a lot of uncertainty as far as expanding the company goes and for that reason, he’s out.

Lori also drops out, stating that while the bikes are cool, they aren’t ‘his’ product. Aaron then turns his attention to Daymond, who says he will also be dropping out as he doesn’t feel comfortable asking people ‘to pay $5000 for a bike right now.’

Soon after, Kevin also drops out, stating that it’s a difficult investment (mainly due to the fact that they operate as a distributor). With that, everyone’s attention turns to Barbara, the only remaining Shark. She states that while she loves the product, their business model would mean that she would be subleasing their distribution. However, she does give him an offer—$250,000 for 40% equity.

As Aaron goes on to talk more about the business, he reveals that they had recently had to take a $50,000 loan for the company but that they will be paying it off by the end of the year. Not only that, but he had also taken out a $150,000 SBA loan, which he put into inventory.

Asked whether or not he managed to raise any money with other investors, he tells them that he raised $95,000—$45,000 from family, and friends and $50,000 from two angel investors.  Barbara is surprised about the loans and asks whether or not he will be taking her offer. Telling her that ‘it’s more than he can do’, he gives her a counteroffer of $250,000 for 20%. Barbara thinks about it for a moment before countering back with $250,000 for 33.3%.

Barbara states that she’s willing to do it for 15% equity, which he ultimately accepts after an unsuccessful counter. With that, the two share an air high five and hug (due to the ongoing pandemic) and Aaron leaves the tank.

After the episode aired in March 2021, Robert Herjavec approached Barbara about splitting the deal with her 50/50. This was the first time in Shark Tank history that a deal was done with a Shark who wasn’t on the panel.

According to their official website, Robert had actually been a customer of Bunch Bikes since 2020, before they had even auditioned for the show. He had seen a family ride past his house on a Bunch Bike and had decided to get one for himself so that he could bike with his kids. He even gave Aaron advice on how to take the company to the next level.

As great as it is to have a Shark as a customer, however, Aaron was worried that it would disqualify him from the show. Fortunately, the producers said it wouldn’t be an issue as long as he wasn’t on the panel in his episode.

As far as the actual deal goes, it doesn’t seem to have been finalized yet as of 2022. Our best guess is that they’re probably still working out all the details, especially seeing as how Robert decided to join at the last minute.

Despite that, the company seems to be doing quite well. In 2020, they did $2 million in sales, which was just slightly short of their revenue predictions. By 2021, their revenue had nearly doubled, despite rising costs brought on by the pandemic as well as supply chain disruptions.

Currently, they have five models available: The Original, The Coupe, The K9, The Preschool, and the Mini, all of which come with a 14-day free trial. For those who are interested, you can check out their products page here.

You can also connect with Aaron Powell on Twitter at @cargodad.