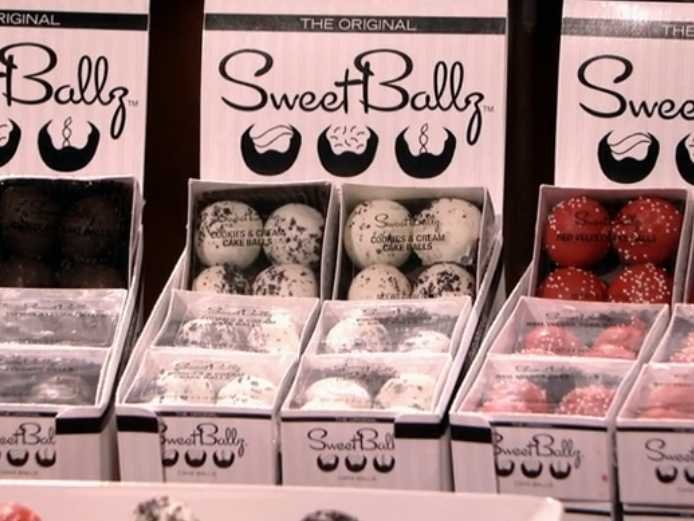 Cake pops are an absolutely delicious treat. Cake pops are essentially a little round ball of moist cake that are speared by a little stick. However, Sweet Ballz seeks to change the formula of that. Prior to their appearance on Shark Tank, this brand was relatively unknown to the outside world. Of course, like all Shark Tank appearances, this changed immediately following the episode.

Cole Egger and James McDonald of Sweet Ballz have walked into the Shark Tank, and they represent Sweet Ballz. They are looking for $250,000 in exchange for 10% of their company.

Cole starts by saying that everyone loves a delicious cake or cupcake, but not the amount of time that goes into preparing a delicious treat. They took a very popular product, the cake-pop (which is a little cake ball on a stick), and removed the stick. They then added packaging and set four in a pack, making a delicious treat. They then pass out samples for the Sharks, and introduce the flavors of chocolate sweet balls, red velvet sweet balls, and vanilla cream sweet balls. All of the Sharks love the flavors.

Lori says that all of the cake-pops she has tried were not very good, and were dry and flaky. However, the cake-pops that were served to the Sharks were very cakey and moist and fresh, and want to know the shelf life of the product. James says that Sweet Ballz have about a 45 day shelf life unrefrigerated. In the last 90 days, they have done $700,000 in sales, and one of their major purchasers were actually well-known convenience chain in the United States, 7-11. Each pack retails anywhere from $1.99 to $2.49, and cost Sweet Ballz approximately $.86 to make.

Barbara says that walking into a huge retail order like that must be a dream for a young company, and wants

to know how they received the deal – Cole says he used to do marketing for the Dallas Mavericks, an NBA team, and was able to find a producer quickly and use connections he made to sell the product and expand. James says that his main experience has been in the frozen food product category, and Kevin wants to know if he has made any money in his past ventures. James says that he was unsuccessful in past ventures, due to not being able to properly raise capital, and that is where he hopes to change things with an investment from the Sharks of Shark Tank.

Kevin asks what percentage of their sales are 7-11, to which James replies that they are about 95% of their total sales. Kevin wants to know why it doesn’t raise an alarm that 95% of their sales come from one retailer, and James says that with the money from the Sharks, he would be able to use the same network that 7-11 uses and move Sweet Ballz into more stores. Kevin asks the profit to date, which has been about $95,000. Currently, they have a 21 day turnaround, which means that Sweet Ballz is recovering its cost every 21 days for one unit sold. With the money from Shark Tank, they would be able to expand and use that money to decrease their turnaround time and make better money. This would expand their inventory needs, as well.

Robert and Barbara agree that nobody is interested in purchasing at 10%, but that everyone would be interested in much bigger numbers, jokingly giving 80% as an answer, but then giving the offer of $250,000 for 40% of equity in Sweet Ballz. The two from Sweet Ballz want to hear other offers, and Kevin asks if they have paid themselves anything – James says that they have paid themselves about $3,000 to $4,000 per month. Kevin notes that he likes the idea, since he is in the business of cupcakes and he is making a ton of money. He offers $250,000 for 30%, but voices his concern in earning that money back before he dies. He wants to also offer an equal cash distribution – for every dollar that is shipped, he will match a dollar for investment, effectively doubling the amount of capital that Sweet Ballz would be generating. Kevin also says that he knows a lot of distribution networks, saying that he can call any retailer and get his call returned. Lori says that she likes Kevin’s offer, but she does not like Kevin, so she offers $250,000 in exchange for 36% and the same offer as Kevin. However, Lori also brings with her her known quality for expanding at a lightning quick speed, as well as the backing of QVC, which is a popular grocery store in the United States.

Lori and Barbara go back and forth, with Lori saying that she knows how to survive on QVC which is apparently a very tricky trade, but can turn hundreds of thousands of dollars in potentially minutes; Barbara says that almost everything from QVC eventually goes adjunct. Robert steps in and offers $250,000 for 25%, saying he does not need a royalty and does not offer any distribution deals. Robert says that he could bring Costco as a supplier. Lori says that the two need a retailer and a Shark that knows how to keep their product in the stores.

Mark has been silent the whole time, and Jacob and Cole ask for any offer from Mark. Mark says that he is interested, but wants a strategic partner, and would ask for a partnership from Barbara due to Barbara’s experience. Barbara says that since she is working with a generous offer, she adjusts her offer to 33%, but Mark says that he and Barbara had agreed on an offer to 25%. This causes the sharks to become interested in the deal, and Barbara finally relents to agreeing on $250,000 for a 25% split between the two of them. Robert steps in and asks that the two see that there is value in having more than one Shark help the future of Sweet Ballz, and wants to also step in as the third shark and match the offer, partnering with Kevin and Lori to offer $250,000 for 30%, and the same distribution deal that Kevin had offered, as well as the equal cash distribution deal. This is all versus Mark and Barbara’s offer of $250,000 for 25%, but only two sharks.

Kevin notes that this is a very rare occurrence in the Shark Tank where all five sharks are involved, and insist to know the decision. Eventually, Jacob McDonald and Cole Egger decide upon having Mark and Barbara as their investment partners, earning a $250,000 investment for 25% equity split between the two Sharks.

As far as we can tell, their deal with Mark and Barbara never went through—and for good reason. Just a week after the episode aired, James sued Cole. According to court documents, they had agreed that James would be the sole CVFG employee with a salary of $50,000. They had also hired an individual by the name of Andrew Offer to be their Chief Financial Officer.

The problem was that it was never okayed by their other partner, Matt Landis. The make matters worse, it was later announced that 7-Eleven had purchased $400,000 worth of Sweet Ballz. Not only that, but Cole had allegedly tinkered with the website and made deals with other parties behind their backs. This strained the relations between the founding members and caused James to file a lawsuit for breach of contract.

Perhaps even more interesting, is the fact that their old website redirected to something called “Cakeballz”. In fact, the Sweet Ballz website had disappeared altogether. According to James’ attorney, Cole had set up the website to “sabotage [his] business.” In the end, they had to get a temporary restraining order against them.

After the dust settled, there were two companies remaining—Sweet Ballz and The Cake Ball Company. While the latter no longer exists, the former is still up and running as of 2022. With that said, it looks like they closed their online store for the summer season. According to their site, they will re-open in the fall.

Currently, there are six different flavors listed on their page including Lemon, Chocolate, Birthday Cake, Cookies and Cream, Salted Caramel, and Red Velvet. They also offer variety packs that come with a mix of flavors.

That’s not all, they’ve also added a new line called “Sports Balls” which are essentially cake balls that are decorated to look like baseballs, basketballs, and footballs. And like the original Sweet Ballz, they are handcrafted with high-quality ingredients. If you want, you can even customize them with your favorite team’s colors. While they can’t be ordered individually, they do offer them as part of their catering service. For more information, you can send them a message via their contact page.

You can also connect with the company on social media. They have an Instagram page (@sweetballz) as well as an official Facebook page (@sweetballz). Keep in mind, however, that neither of them has been updated in a while.