Pop It Pal 2022 Update – What Happened After Shark Tank

Pop It Pal Before Shark Tank

Bill Pierce was in automotive manufacturing before going into the pimple popping business. Inspired by the success of Dr. Pimple Popper, Bill and his wife Summer came up with the Pop It Pal, a blackhead popping simulator. They enlisted the help of Bill’s cousin, Kayla Roof, to market the thing. They were able to go viral and get the product out there. Now they were on Shark Tank to take it to the next level.

Pop It Pal on Shark Tank

Bill Pierce, Summer Pierce, and Kayla Roof all walked out onto the stage of the Shark Tank. Summer is Bill’s wife, and Kayla is Bill’s cousin. They all spoke in unison as they introduced the name of their business, Pop It Pal, and requested $350,000 in exchange for 10% equity in their company.

Bill put forward that millions of people all over the nation love popping zits. Mark Cuban groaned in disgust, while Lori just watched in horror. He said that pimple-popping went viral with thousands of videos viewed daily. For example, Dr. Pimple popper is an enormous platform on YouTube and TikTok. Summer noted that popping pimples was a bad habit that could result in many adverse effects such as scarring or infections. Kayla said it was no problem to squeeze as much as possible with their product, Pop It Pal. 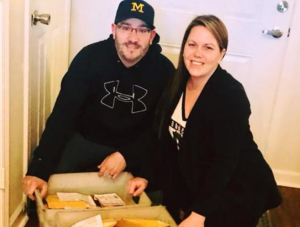 Bill told the Sharks that they had invented Pop It Pal, the world’s first pimple-popping simulation device. Summer went over to grab a poster of a graphic scene of someone popping a pimple and returned to join her husband and his cousin. The picture even showed the pus coming out. The camera panned over to the table, where many of the simulators had different skin tones. Summer called the Pop It Pal a stress reliever, saying it came with pimples. She said you would squeeze it with the same motion you would use to squeeze a zit.

Kayla said that there was an extreme sense of satisfaction that came with the act of squeezing the zits. There are 16 sample pimples on each sheet. The gross yellow pus that came out was refillable. So there was no longer any need to pick your face. Bill said that it was just beginning. They were planning on building an empire revolving around Pop It Pal. They ended their presentation in unison as well. Summer asked the Sharks who wanted to help them get things Poppin’.

Mark Cuban requested samples, asking when they would get to play. Rohan, one of the two guest Sharks on set that day, exclaimed that he loved popping pimples, and Lori said she was afraid. The Sharks made sly remarks that the pus-filled product looked like Mr. Wonderful’s back. They all received different colors of the Pop It Pal, representing different skin tones.

Kevin was one of the first to get it, and the camera handover to his product, smear it with the husk solution. Lori said that, honestly, hers wasn’t working. Rohan wanted to rewind a little bit. He understood the product, saying that it was a placebo for popping your pimples. It’s to get the sensation of popping a spot when you get the urge. Kevin said that it works. There’s no question about it. Lori still insisted that hers did not work at all. 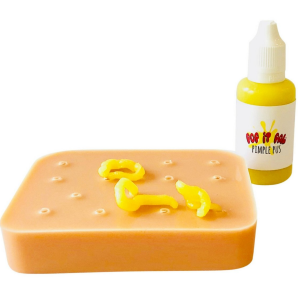 Rohan said he was popping the fake pimples like crazy but still wanted to know how they came up with the idea. Summer told him that she and Bill were driving down the road one day, bouncing business ideas off each other. This is what they came up with. Both of them loved watching the Dr. Pimple Popper shows. Mark was surprised that they admitted that on television. Lori and Bethenny Frankel, the other guest Shark for the day, both wondered what the pus was made of. Summer explained that they made it from beeswax and other nontoxic chemicals. Mark joked that it was cheese and she should eat it.

Rohan wanted to know about the numbers. They told him they had sold $315,000 in the last four months. This was impressive to him. Bethenny wanted to know how much it would cost to buy. Bill told her it was $8 to make and $19.99 to purchase on the customer side. Mark said that their margins were too low. They should be able to get their cost of goods down. The cousin spoke out, stating that that was one of the reasons that all of them were on the Shark Tank. Kayla explained that they were still manufacturing the Pop It Pals by hand at his house! Bill said that they had made 12000 units and they were very successful selling them on the Internet.

Lori wanted to know what their background was. Bill let her know that he used to work in the automotive industry. There’s a bunch of chatter and chaos among the Sharks; Rohan soon got them back on track. He wanted to know more about the rest of their background. Summer said she had shattered her ankle four years ago and needed something that she could do from home for work. She still wanted to be able to contribute to her family. Kayla had a marketing background and primarily worked on the website and did the advertising.

She was the one that had developed the social media plan. Kevin, of course, wanted to know if they had a patent. Bill told him they had a utility patent so far and that the popping motion was proprietary. Kevin said he needed assurance that it was safe, although it was unclear whether he was talking about the product itself or its financial status. 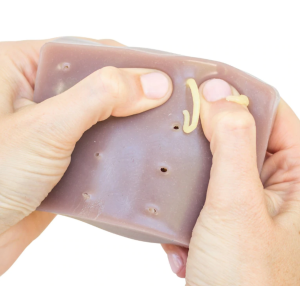 Bethenny wanted to know why the piece of silicone looked like a sponge instead of a face or a butt. He’ll start to answer, but Mark Cuban cut in for him. He said it was their future product. It would have been harder to make a product that looks like a butt in Bill’s house. Bill’s cousin assured them they have an entire line of body parts shaped Pop It Pals ready to go once they’ve received an investment.

Mark wanted to know what kind of marketing they did because selling 12000 units didn’t just happen in four months. Kayla said that they started making videos about the product, and one of them got 30 million views. Kevin wants to know if they were still going viral or if it was a one or two-times thing. Bill said they had normalized, meaning each video was getting about 50,000 views. Kevin asked them if they thought 50000 views a month would sustain their business. Kayla explained that they were currently having a hard time keeping up with demand, and it would be easier to go viral if they were able to create more products.

Kevin said that he understood their issue but still wondered what the plan was if they could get more money and optimize their production process. How would they scale? The cousin said they were working with a supplier to get their cost down to $5 per piece. Kevin wanted to know why it was so expensive. The cousin explained that the silicone was driving the expense up.

Bethenny said that for a lot of people, it would be a curiosity factor. She understood why they could get so many sales initially but felt sustainable. She said that it was difficult to see that they would have repeat customers. When you were starting a business with products like this, she thought that you would need something that people would continue to purchase even after the novelty wore off.

The cousin stammered a little but said that the cells of the refillable pus were giant sellers for them. That was the part of the picture that the new Bethenny wasn’t saying. They did have a product that people would need to keep buying repeatedly, something that was easy to upsell when people were buying the primary product. 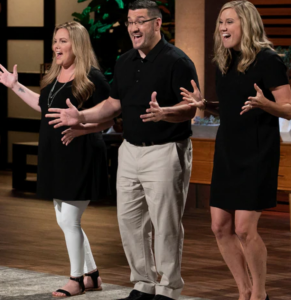 Well,, they were having this discussion; Lori got the product to work for the first time. The other Sharks made fun of her, but as she said, she was not a pimple popper. Kevin wants to know what investment he would need to make and what volume they would need to produce to get the manufacturing cost down to $5. Bill said that they would need to create 30000 units to get them down to $5 a piece, which is the order they planned to place in the next month.

Kevin said that he still found that too expensive. He wanted to know where they got their 2.5 million dollar valuation from. The cousin said that they were probably really selling the products through online retail, and they were getting a good deal of sales from other countries such as Germany and Taiwan. The Sharks laughed and joked that Germany loved popping their pimples.

Kevin wanted to get back on track. Summer told him they were on their way to making almost $1000000 in sales for the rest of the year. Kayla said they would profit a little over $300,000 from that money. Bethenny said that she thought they were in the novelty gag business, and she was in the Practical solution business,, so she went out. Kevin decided to make them an offer. He said he had always wanted some zits in his portfolio. His deal was a bit complicated. Lori ended up also going out since she needed to be excited about what she brought to the table.

Rohan went out as well, despite saying he loves popping pimples at the beginning of the presentation. It probably wasn’t suitable for his brand. Mark made an offer, going head to head against Kevin. He wanted more equity in the company. Kevin wanted to add other colors of the refillable solution so he could add blood and green pus. Kevin said that everyone else was confused about the deal, and he was the only one with creativity. Mark wanted 25%. Ultimately, the trio decided to go with Kevin’s offer. Mark said that it was maybe the second time he had lost a deal to Kevin in eight years in eight years.

So how is Pop It Pal holding up in 2022 after getting a deal with Mr Wonderful? It looks like they are still going strong, despite an unsuccessful Kickstarter campaign for a nose-shaped pimple popper called “The Blackhead Buddy.” It seems like the body part-shaped concept was a bit too gross for the general public. The Pop It Pal website still has the classic sponge shapes in both flesh tones and a new glitter edition, along with the refillable pus.