Click & Carry After Shark Tank Update 2023 – Where Are They Now 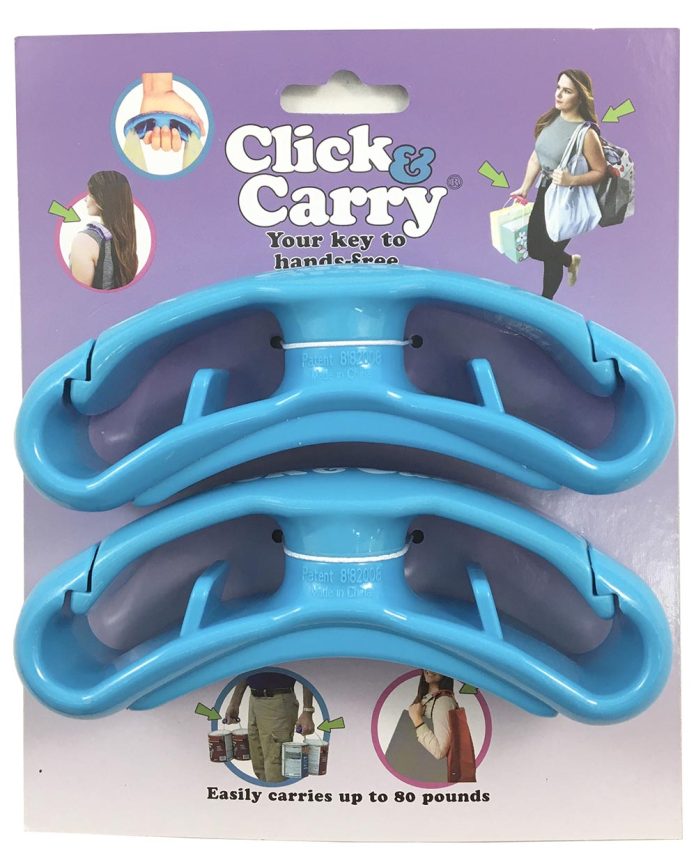 Click & Carry was founded in April 2005. It was created with the purpose to make carrying multiple bags easier and less uncomfortable. The founder, Kim Meckwood, thought up this idea during her life in a multi-story apartment. Her apartment was not located on the first floor; thus meaning she had always had to haul all her grocery bags up flights of stairs. This is much more exhausting with multiple loads to carry, hence leaving Kim to design a tool to make this task more trouble-free.
Click & Carry is an easy-to-use tool that allows users to carry more bags without having to use their hands or arms. Instead, this product sits over one’s shoulder with the attached grocery bags hanging on the front and back. This clip was designed with a cushion for increased comfort, and it can easily hold up to 80 pounds. Click & Carry is also versatile and can carry any kind of bag needed, as well as paint cans, buckets, pet leashes, etc. Overall, Click & Carry can be used on a variety of lifting and/or carrying needs with just one single click. 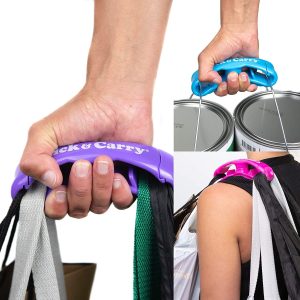 Already, Kim seems to have a good grip on running her Click & Carry business. However, when she had experienced some minor financial complications, Kim went on to appear on 5-Minute Pitch in search of prospects. During this competition, she pitched Click & Carry by presenting the different ways the product could be used, as well as the two patents that were already in place. From there, Click & Carry was introduced at farmers markets and swap meets, where the product did get some sales. More specifically, she was able to successfully sell 30,000 units.
Unfortunately, her business was later put on hold due to her battle with breast cancer. But she won that battle and continued on with Click & Carry. In fact, after being noticed by a QVC buyer at a Home & Housewares event, her product has been featured on QVC for a chunk of time. This was a big success for Kim and her product, which led Click & Carry to be available on Amazon as well as in stores such as The Container Store, Ralph’s, ShopRite, and CorningWare.
Although Kim has achieved many successes with her business, she wanted to step it up a notch. Her next big project was to hopefully be able to have small screen presentations showing the product’s capabilities in stores. However, that requires more money and the help of an investor. Can Kim impress the sharks of Shark Tank and leave with an offer? Let’s find out.

On December 11, 2020, Kim Meckwood introduced Click & Carry to the sharks. She went on to search for a $225,000 offer for 15% of Click & Carry. During her pitch, she explained how the idea for her product came to her after her breakup. She mentioned that her ex-boyfriend used to help her with the bigger grocery hauls, but now that it was just her, she wanted an easier way of carrying the bags inside. At this time, Barbara Corcoran and Lori Greiner got to sample the product themselves.
Barbara really liked Click & Carry; she went on to ask Kim if she would consider giving the company up, along with asking of Kim’s future creations. Kim explained to Barbara that she was fine with not being in control of Click & Carry; however, she still wanted to receive some sort of profit from its sales. Barbara then offers $225,000 for 85%, but Kim declines the offer. 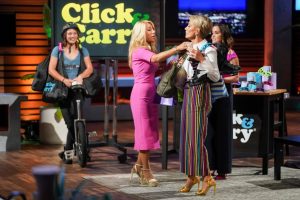 Kevin O’Leary and Mark Cuban chime in next. Kevin is out because he believes Kim should have asked for less of an offer due to Click & Carry only being a product at this time. Mark, on the other hand, liked the idea, but he thinks she needs someone else to run the company because she is an inventor. Kevin agreed to this statement, while following with his statement, “you’re not an operator”.
Of all the sharks, Mark and Barbara are the only two who are still interested. They decide to team up – He explains that Kim would continue being the inventor, while he and Barbara manage the company and inventory. They proceed to offer Kim $225,000 for 40% of Click & Carry. Kim accepts their offer as it is the best option for the business.

After appearing on Shark Tank in 2020, Kim successfully landed a deal with, not one, but two sharks. Considering she currently holds a record for the most attempts of getting featured on the show, that’s a pretty big accomplishment on its own. Now, as of 2023, Click & Carry is still in business and thriving. In fact, they’ve made $70,000 in sales since the airing of Shark Tank, along with more orders being placed and customers asking for more products. 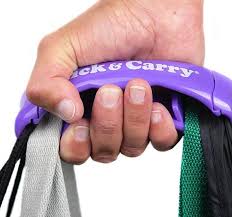 Click & Carry has successfully been expanded to markets across the world, as well as in stores in Japan and England. The product was even featured in Redbook Magazine under “The Best Stocking Stuffers from Amazon Under $20”. In addition to that, Click & Carry started partnering with an organization called Canine Companion. The company donates to this organization in order to help those with disabilities to receive free training for their dogs. This training provides the assistant dogs to be able to learn how to use Click & Carry to help their owners. You can view the incredible videos of said training on their Instagram account.
The product is available for purchase in at least 12 different colors. It can be found in many stores across the nation, as well as on Amazon and the Click & carry company website.
Share
Facebook
Twitter
Pinterest
WhatsApp
Previous articleTerra Core After Shark Tank – 2023 Update
Next articleQuickflip 2023 Update – What Happened After Shark Tank