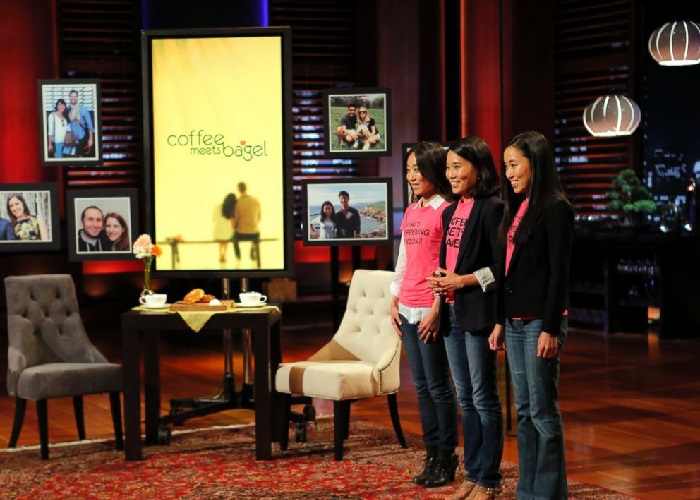 Sisters Soo, Arum and Dawoon Kang emigrated to America from Korea at an early age, to gain the benefits of a first-class education. Their father worked every available hour to ensure that his three daughters had the best opportunities. His endeavors eventually paid off, they graduated from Harvard, Stanford and The Parsons School of Design respectively, and they all began well-paid careers in their chosen fields.

Over lunch one day, the three sisters began discussing dating, and the common problems they had experienced dating online. They all knew the type of dating experience they would rather have, and none of the available sites or apps provided their ideal experience. They decided that with the skills they possessed between them, they could set up their own online dating service, to fill the niche in the market. They soon put their plan into operation, giving up their lucrative jobs, and launching the Coffee Meets Bagel Company.

They moved to San Francisco to help with the technical set-up of the business and began with a dating website. The initial business and number of users grew rapidly, and within a year they had developed and produced their own Coffee Meets Bagel App, however, as with all new start-ups cash-flow was a big hurdle to further rapid growth. Seeking further investment they applied to appear on Shark Tank, were accepted and appeared on the show in January 2015.

The Kang sisters entered the Shark Tank hoping to gain a shark partner who would invest $500,000 in exchange for 5% equity in the company.

They ran through the concept of the Coffee Meets Bagel dating app. Arum described it as able to ‘Profoundly change the way people meet and fall in love’. The app took traditional online dating but merged it with elements of social media, so that users would see other users who shared mutual friends with them on Facebook, thereby increasing the chances of compatibility between them.

Robert Herjavec queried what the connection to bagels was, and Arum explained that even though online dating was an ever more common way to meet people, there was still a stigma attached to users. The company name was deliberately vague concerning the services offered, to create a kind of secret code between users.

Kevin inquired about the business model, and Dawoon explained that although the core services were free to users, additional premium services could be bought, as with all other virtual dating applications. Arum elaborated with a few more benefits of Coffee Meets Bagels. As users were sourced from Facebook, they were not required to fill in a lengthy and obtrusive questionnaire to join, instead, they could sign up via Facebook in less than a minute.

Kevin O’Leary asked how many users were currently signed up for the service, and Arum became evasive. She disclosed there were ‘Several hundred thousand’ users currently, but despite plenty of pressure from Mark Cuban and Kevin, she refused to disclose the exact number.

Robert Herjavec joined in with the probing, asking why the figure was such a secret. Arum began to speak but was quickly interrupted by Mark. The billionaire Texan had heard enough evasion from the sisters and abruptly dropped out.

Kevin was amazed at the secrecy and said so. Robert Herjavec was happy to move on for the moment, he inquired what sales and profits had been achieved for the business.

Arum confirmed that the previous year’s sales of $87,000 had been easily surpassed in the first five months of the current year, with sales so far of $270,000. Total sales for the end of the year were projected to top $1 million, and $10 million was projected for the following year.

Robert looked more interested but it didn’t last. Arum disclosed that the company was still making a loss, mainly due to initial salary costs for developers to create the App. Robert asked if the sisters were taking a salary, and Arum admitted that they all took a $100,000 salary from the business.

The sharks looked less than impressed at the $300,000 annual salary between the sisters, Arum attempted some damage control, explaining that they had already raised almost $3 million in external funding. Robert asked what profits would be achieved if the projected one million in sales were made. Arum admitted that the company would still lose a million dollars with a million in sales, explaining that future profits were likely to be spent on new customer acquisition.

Barbara Corcoran asked what profits the company would make if they achieved their projected sales of $10 million in two years time. Arum told her that the company would begin to break even at that point, and Barbara looked horrified.

Robert admired the ‘all or nothing’ conviction of the sisters and asserted that the strategy could work, but for him, it was just too risky, and with that, he was out.

Kevin was in agreement, the strategy was risky but potentially very profitable once the user base had grown substantially, but he believed that 5% equity was too small a stake for such a big risk, and Kevin dropped out too.

Lori Greiner had seemed uninterested since the subject of the salaries had come up. She confirmed now they were a huge problem for her, particularly when a business was still not making a profit. Arum attempted to justify the salaries, pointing out that $100,000 had been a big pay cut for all three sisters, but Lori wasn’t convinced. She also believed that the basis of the Coffee Meets Bagel app could be copied at any time. Lori asserted that the copying of original ideas happened ‘all the time’ on the internet, and for those reasons, she was out too.

Barbara told the Kang sisters that she loved the concept of the service, she believed it would be a big hit with women, and men would inevitably follow them onto the service. But only breaking even if $10 million in sales was achieved, was ‘spooky’ to her, she believed that such a make or break strategy was an ‘enormous risk’, and Barbara was the last shark to drop out.

Without a deal from the sharks, the unsuccessful entrepreneurs were about to depart the tank when Mark Cuban suddenly spoke up, and to the amazement of the entrepreneurial sisters, and his fellow sharks, he made the biggest offer the Shark Tank has ever seen. He asked the sisters if they would accept $30 million for the entire company. The sisters said nothing for a long moment, but eventually, Arum confirmed that they wouldn’t. They saw Coffee Meets Bagel as being potentially bigger than Match.com, which had annual revenue in excess of $800 million.

Robert admired the fact that Arum had not even flinched at such a huge offer. Mark admired her convictions too but still thought the risk-reward ratio on a partnership deal was poor. Unable to gain the entire business for himself, Mark again dropped out, and the Kang sisters were left without a deal in the tank, for good this time.

Coffee Meets Bagel Now in 2022 – The After Shark Tank Update

While on the show, Mark Cuban offered the sisters $30 million for Coffee Meets Bagel, which they ultimately turned down. They chose to walk away from the show instead and have since managed to raise $23.2 million with the help of other investors.

As of May 2022, Coffee Meets Bagel is still up and running. The app is still available for download on Apple and Android devices and the last time we checked, it had a user base of approximately ten million. Despite that, it doesn’t seem to be as successful as the sisters had hoped.

If you were to look up the top-ranked dating apps on the App Store or Google Play, it barely reaches the top twenty. Reviews are also mixed. While some people have had success with the app, others have found it to be frustrating with the number of fake profiles and limited search capabilities. Many users have also expressed their dissatisfaction about having to pay to see profiles, matches, and likes (features are limited unless you upgrade to a premium account).

The company’s website also appears minimal. For one thing, there’s limited information about the actual app on the site (there’s only a general landing page). Not only that, but they’ve also seemed to have shifted their focus away from women, which ironically, was their original focus. Rather, they seem to be targeting young professionals from wealthy countries around the world, which makes sense seeing as how they’d said their next step was to ‘serve international markets’, according to an interview they did with Forbes back in 2017.

Still, the app has helped many find their significant others. As of 2022, more than 250 marriages have been arranged through the dating app and at least 25,000 relationships have been started through matches. They’ve also implemented new features in response to the COVID-19 pandemic. In 2020, they introduced a video virtual speed dating feature, which allows users to meet for virtual dates. This feature isn’t specific to Coffee Meets Bagel, however, as many other dating apps (e.g. Bumble, POF, harmony, Tinder) also allow you to go on virtual dates with your match.

For those who are interested in the app or would like to keep up with their latest updates, consider following them on social media. They’re active on both Instagram (@coffeemeetsbagel) and Twitter (@coffeembagel). They also have an official Facebook page, which has received over 46,000 likes since its launch.