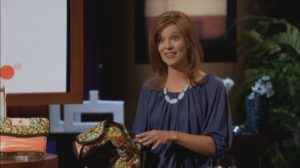 Ginelle told the Sharks that her idea for her product came about when her daughter was burned while swinging on a park swing. She couldn’t find a consumer product that would shield her daughter from the heat of the swing in the summer. Ginelle decided to make one at that point.Would the Sharks see the value in this 4-in-one product called the Cool Wazoo? Let’s take a look.

Ginelle Evans walked out into the Shark Tank and faced the Sharks in front of her. Ginelle introduced herself as the owner of Cool Wazoo, and ask the Sharks for $65,000 in exchange for 25% equity in her business. She showed the Sharks her diaper bag, which was filled to the brim with a bunch of different products. To know start pulling out various things in the bag including of restaurant high chair cover, a shopping cart cover, and a car shade, and a portable changing pad that looked really small. Ginelle told the Sharks that she couldn’t even fit diapers in the diaper bag. That was when Ginelle had a Eureka moment. She thought that she could have all of those products in one, and include her swing idea.

At that point, Ginelle introduced the Cool Wazoo. She said that it contained material that redirected the heat back into the swing, or whatever the heat Source was. Ginelle also said that the cool Wazoo was 5 things in one. As well as being the swing cover, it was also the restaurant high chair cover the shopping cart cover, the changing pad as well as a car shade. Kevin looked on in confusion. Ginelle continued saying that she wanted a Shark who was in line with her vision that want to make an investment. Kevin started writing, saying that he didn’t have any of this crap when he was 5 years old and he survived somehow. Kevin wanted to know who was buying all of this junk. Ginelle let him know that concerned moms were the people who are buying this product. The moms worry about germs as well as the heat. Lori told Ginelle show Kevin the packaging to alleviate the confusion.

As Ginelle handed Kevin the package, Mark asked her if they were other competitors. He said that his wife uses some of the same products. Ginelle Told him that her competitors were the companies that made the single-use product. she insisted but no one else included 5 things and one product. Ginelle That when her daughter was burned it was 80 degrees outside. Kevin interrupted her story, and asked her what she was doing as her daughter was getting burned Ginelle looks shocked and said that she was simply swinging her on the swing that she put her on. Kevin seem surprised that the child wasn’t screaming as she was getting burned. Ginelle told him that she just making little fussy noises that Ginelle treated with exasperation. Her honesty had all of the Sharks laughing. Ginelle told the Sharks that she had purchased a laser gun that test the surface temperature of different objects. The Sharks wanted to know if they it if she had shot her daughter with it. Ginelle laughed and said that she measured the temperature of the swing.

Ginelle let them know that she had a bit of luck in that her product was featured on The Today Show with Kathie Lee.The product was featured for about 40 seconds. Lori want to know how many cool was as she was able to sell in those 40 seconds of airtime. You know let her know that she didn’t have any inventory to sell at that time. Lori wanted to know if she still take orders online even though she didn’t have any inventory. Ginelle Set down she had started the production of the Cool Wazoos, had her 40 seconds of Fame on The Today Show, but when she got her products back from the production team 85% of them were wrong. Ginelle Continue stating that her first one had to be sent back to the factory because the workers did not know how to create with that kind of material. Lori look shocked.

Mark wanted to know if they refunded the money when she returned the product but Ginelle let him know that they did not. Lori wants to know how many people had ordered, and Ginelle told her that she had gotten about $14,000 in sales at that point. Daymond wanted to know what happened after that. Ginelle told him that she didn’t really know where to proceed from there. She wasn’t sure how to capitalize on her sales. Ginelle said that she had also been on a Christmas special episode of the doctors. Robert looked impressed. Daymond I asked her what happened after she went on the doctors, to see if she learned from her experience on The Today Show. Ginelle told the Sharks that she had been out of money point. She explained that the show’s producers wanted her to donate 250 cool onesies to give out to the audience members. she said that she’d been able to do that, but that was essentially all of her inventory. Mark wanted to know what she got in return. Ginelle Told him that she got nothing in return, and blamed it on a change in the format of the show. Daymond told her that wasn’t a great business decision. Kevin was sarcastically sympathetic, telling her that she got who was screwed. He then jumped into her sales figures wanting to know what they were.

Ginelle told him that she had made $20,000 in the last 12 months. She insisted that this low number was due to her not having any inventory on hand. She said that she is not been concentrating on making a lot of sales, because she has been moving her production overseas. She insisted that it was costing too much money to make her product in the United States. Mark wanted to know what the cost was per unit to make them in America. Ginelle told the Sharks to hold their breath, because it cost $30 per unit to make a cool Wazoo inn America. Robert gasped dramatically.

Ginelle looked a little frantic. She told the remaining Sharks that she had orders from a Canadian distributor that she signed an agreement with. she continued, saying that that distributor wanted 2 to 3000 units to start off with. Ginelle said that she got a purchase order for the first thousand. Lori said that she thought that Ginelle was great, and then she will find solutions to her problems. Laurie insisted the this product would not be the successful one, but that Ginelle would have a successful product in the future. She went out This left only mark.

Mike told Ginelle that the problem with cool Wazoo isn’t the product, but the fact that it wasn’t a business yet. Mark said that he would need to get a return on the time he would spend to educate her on how to be a good businesswoman. He said that the money was actually the easy part. He went out, stating that she couldn’t go through an ongoing learning process with his money. She looked disappointed. she has the Sharks if everyone was out, and when they not it she clearly fought back tears. She told them that being on the Shark Tank men a lot since she has put so much into it, and work so hard. Ginelle said that she understood that it seems like she just launched, but she’s actually been putting entrepreneurs our hours in for the last 4 years. She said that it took her two years to design the product and Source the material to make it work. Lori looked move 2. She told Ginelle but she would go back in Because she really liked her. Lori said that she would give her her asking bid, which was $65,000 in exchange for 25% of the company. Lori continued, stating that she would help to know get the price down, and learn how to manufacture it better. Kevin told Lori that he would have taken 50% of the company. Ginelle jumped up and down, and told Lori that she would accept the deal she held her arms out wide open to hug the Shark. Daymond told her that she was deadly since her smile worked her husband, and her tears. Lori. She thanked him and left the stage.

Cool Wazoo Now In 2022– The After Shark Tank Update

With Lori’s help, she was able to take the company to the next level. For one thing, she started selling the product on Amazon; sales also exploded after their segment aired, which is typical of a Shark Tank product. Reading through some of the reviews on the site, most people seem satisfied with the multipurpose pad. Many praised it for being versatile and easy to use. Still, some customers thought it was expensive for what it is. Some also complained about the pad being difficult the fold. Other claimed that it didn’t work with shopping carts.

Aside from Amazon, they also landed a licensing deal with Babies R Us, who agreed to sell the pads at multiple locations across the US. Not only that, but Ginelle also participated in a number of trade shows, which gave the product a decent amount of exposure.

As of 2022, their MyShopify store is still up and running. What’s interesting, though, is that all of their products are currently “out of stock”. They all seemed to have been on sale as well- from $59.99 to $39.99.

Are they shutting down the business or are they simply out of inventory? It’s hard to tell. We did, however, find a clue from their Amazon store. As far as we can tell, the multipurpose pads haven’t been available since 2017. Given that, Cool Wazoo may very well be out of business. Another telling sign is their Instagram account; it’s currently private and has zero posts.

So, what’s Ginelle up to now? From the looks of it, she’s currently working on a new business called BoxPartie, which specializes in party favors and decorations. In fact, that’s all she has been posting about on her official Facebook page (she previously posted about Cool Wazoo as well).

“Created with social distancing parties in mind,” the new company offers a variety of products including candy necklace favors, color page party favors, scratch and win games, confetti, game cards, balloons, and place cards, many of which are printed in-house with a professional label machine. They also have a free downloads section where you can print out free templates for your birthday parties. However, the company seems to have minimal reviews from customers so it’s hard to know exactly how they’re doing.

At one point, she also ran a company called Blew Bubble, which offered customized favors for sports teams and other events. While it’s still listed under her Cheerful Child company, the URL no longer works so we can only assume that it’s been shut down.