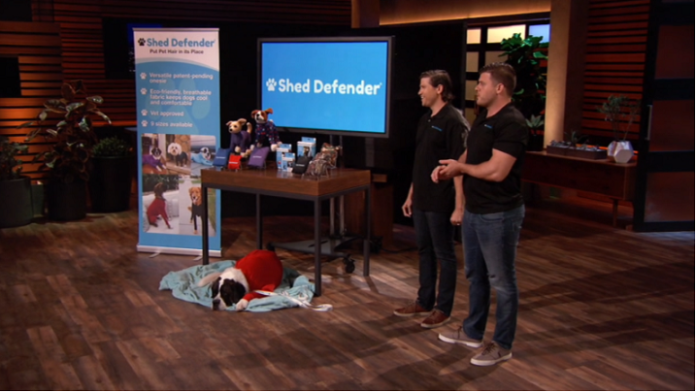 The Shed Defender is a onesie for dogs that is light, ecofriendly, and made with a material that is easy to breathe in. The design has been approved by veterinarians and is not only safe but also a comfort for the dog. It saves a lot on the cleaning giving the owner free time to do other things.

Customers have also said that using the Shed Defender leads to less anxiety in their dogs. It has been suggested that it could be used to replace the cone of shame. Creating the company and getting it running has not been easy. Although they have enjoyed tremendous sales, Tyson and Myles have experienced problems such as sufficient funds. Tyson even had to forego his patents on the products because they couldn’t afford a patent.

These challenges are the reason they wanted to appear on Shark Tank. Their request was successful and they were invited to the second episode of the tenth season. 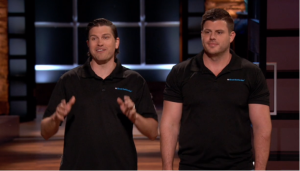 Tyson and Myles were looking for $250,000 for 10% of their company.  For their presentation, they brought out dogs wearing the Shed Defender suit which the sharks loved.  Some samples were also given out.  Kevin’s first concern was whether dogs could relieve themselves without having to be removed from the suit. He was shown that dogs could answer both calls of nature without being taken out of the suit.

Mark Cuban then asked them to give a summary of their sales. Tyson said that they had been in operation for around 18 months and had recorded a pre-tax revenue of $1,200,000.  They had moved 25,000 units in sales. The sharks were very impressed with this figure.

Lori then asked where they sold their product. Tyson told her that they sold it on Amazon, their store, and had just started whole selling. He was then asked how much each size sold for. He said that they had 9 different sizes. The smallest, the mini, would have a retail price of $39.99. The biggest would have a sales price of $62.99.

Mark Cuban then asked them what it cost to make them. Tyson said the mini cost $6.23 while the big one would retail for $13.20. Shed Defender was making about 80% in profit which the sharks thought was very impressive.  Tyler then gave the other benefits that had been realized from the use of the Shed Defender.

Robert then asked whether a dog gets hot wearing the Shed Defender. He was told that the material that was used is very light and breathable. He also said that the clothing was not supposed to be worn all the time for a consecutive number of days. It was supposed to be worn for hours not days such as when taking the dog on a car ride.

Lori then asked whether they had a utility patent or not. She was told that they didn’t have one because when they started, getting a patent proved to be very costly. Kevin then asked him if he was worried about copycats because if the business grew, others would start making the suits and there wouldn’t be a way to differentiate them from the rest.

Mark Cuban agreed with their strategy and thought that if the patent wasn’t available going without it was not a bad idea. Robert then asked them what their sales projection was for the next two years given their current revenue of $1.2 million. Myles said that they were expecting to record sales of $2.5 million. Barbara asked them how they expected to get there and Tyson said that they were targeting the big box stores.  Mark Cuban then left. He said that he thought that the idea was good but he did not know much about the pet industry and he didn’t think he could help them gain traction.  He also stated that he thought that their current sales model was great and he wasn’t sure if reaching out to the big box retail stores was a good idea.

Barbara said that the notion that a business needs more streams of revenue has put a lot of people out of business. Robert agreed with it. She urged the Walters to keep working on what they already have before branching out to retail. She, however, couldn’t relate to the business, and so she was out.

After Kevin made his offer, Lori said that she didn’t agree with his notion that the pair shouldn’t be in retail. She thought that they should even be on TV shows. She then offered them the 250,000 but for 28%. Tyson then asked her if she was willing to partner with them for 25%. She asked them if they knew the word no. They said they hadn’t heard of it.

She then agreed and they made a deal. Tyson said that he was happy that Lori had accepted the offer. He thought that she would sell a lot given her background selling her products on QVC.

Shed Defender Now in [Year] – How Are They Doing After Shark Tank? Shed Defender has enjoyed a great deal of success since its time on Shark Tank. At the time, they were only selling dog onesies. However, they have expanded their line to include leashes, soft chews, and dog shampoo. Their products are made from recycled water bottles so they can be used over and over.

Their social media presence has grown considerably and they have more than 20,000 followers on Facebook and over 16,000 followers on Instagram. Shed Defender now has a net worth of $4,100,000 per month. They also report an average monthly revenue of $700,000 a month which means that they have surpassed the targets that they had set for themselves.  Some celebrities have even been seen using their clothing for their pets. Although the Covid-19 pandemic did slow them down it did so to almost all businesses. For them, It was likely only a small bump in their journey to success.