What Happened to JabbaWockeeZ – Now In 2022 Update 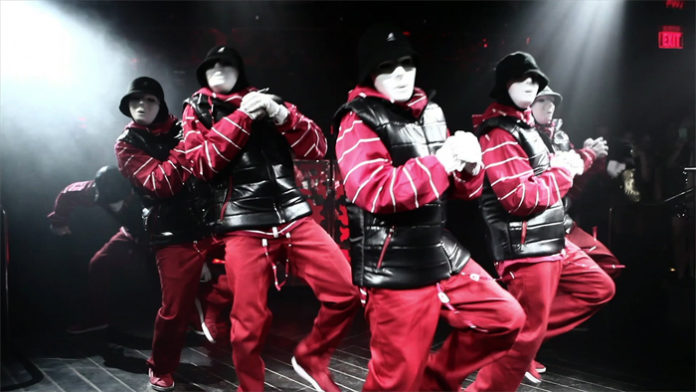 The JabbaWockeeZ is a hip hop dance crew who is most well known for winning the first season of the MTV reality competition, America’s Best Dance Crew. Based in San Diego, California, the group was formed in 2004 when three dancers, Joe Larot “Punkee”, Kevin Brewer “KB” and Phil Tayag “Swagger Boy” came together to perform as the “Three Muskee”. Known for their trademark gloves and masks, a tribute to the 70’s Medea Sirkas, the trio eventually recruited  Chris Gatdula “Cristyle” and Rynan Paguio “Kid Rainen” into the team. Following the completion of their original lineup, they began performing together in public in 2004. Over the years, their unique style- a blend between b-boying and popping has garnered them a devoted fan base in the local dance scene. After several changes to the lineup, The JabbaWockeeZ currently consist of Kevin Brewer, Joe Laot, Jeff Nguyen, Phil Tayag, and Rynan Paguio; some of their past members include Tony Tran, SAso Jimenez, Eddie Gutierrez, and Randy Bernal.

In the spring of 2008, the JabbaWockeeZ jumped at a huge opportunity- they auditioned for the new MTV talent competition, America’s Best Dance Crew. Having successfully impressed the judges, they soon found themselves competing against eleven other dance groups on the show- some of which included Kaba Modern, Live in Color, Fysh n Chicks, Femme 5, and Full Out, and The Movement. Making sure to put on a stunning performance during each round, the hip hop crew buzzed through the different challenges with ease; before long, they were facing against the Boston-based dance crew, Status Quo in the semi finals. With a little bit of luck, they ultimately emerged as the winner of the whole competition in late March of 2008. As the winners of the show, the JabbaWockeeZ were given a cash prize of $100,000 USD.

Since attaining fame on America’s Best Dance Crew, the group have appeared in a number of television commercials including ones for Gatorade, Pepsi, and Ford. As the big winners of the MTV reality talent show, they’ve also guest starred in So You Think You Can Dance, America’s Next Top Model, and Dancing with the Stars. Speaking of the small screen, they’ve also been invited on to various talk shows such as Late Night with Jimmy Fallon (2010), Lopez Tonight (2010), Live! With Kelly and Michael (2010), The Bachelorette (2011), and The Ellen Degeneres Show (2010). In the summer of 2013, they even performed as the backup dancers during Taylor Swift’s on stage performance at the annual Billboard Music Awards.

So what has the all-around talented dance crew from San Diego been up to recently? Have they put on any recent performances on stage? Will we be seeing them perform on television again anytime soon? What happened to the JabbaWockeeZ? Where are they now in 2018?

The History and Formation of JabbaWockeeZ 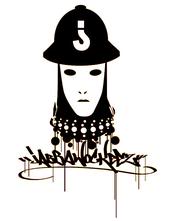 Formed in 2003 in San Diego, California, the group started out as a dancing trio called “Three Muskee” which consisted of Joe Larot “Punkee”, Kevin Brewer “KB”, and Phil Tayag “Swagger Boy”. Having come together for their desire to dance freestyle, they were known for their glove and mask motif- a tribute to the 70’s strutting crew, Medea Sirkas. Performing on the streets of the San Francisco Bay Area, they befriended various other dance crews such as MindTricks; they two groups would later join together to form the JabbaWockeeZ. Named after the Jabberwocky, a mythical creature from Lewis Caroll’s poem, the hip hop crew soon grew to include b-boys Chris Gatdula “Cristyle” and Rynan Paguio “Kid Rainen”. Having completed their lineup, the JabbaWockeeZ officially began dancing as a group in 2004; the original team consisted of Phil, Randy, Gary, Chris, Rynan, Joe and Kevin.

After several months of performing together, the group welcomed additional members into their lineup- bringing their total membership to eleven. After dancing off against Kevin Brewer during a Los Angeles audition, Jeff Nguyen from Phoenix, joined the crew in 2004. Other additions include Ben Chung, Saso Jimenez, and Eddie Gutierrez. In addition to their trademark masks and gloves, the JabbaWockeeZ also made themeslves known for their unique blend of b-boying and popping- often to various self-created instrumentals sometimes referred to as Beat-Kune-Do. 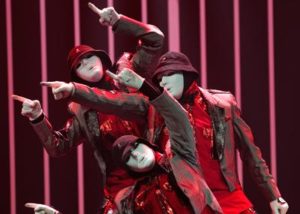 In 2007, the hip hop crew tried their hand  on the popular reality series, America’s Got Talent. Despite having put on a good performance however, the nine members were ultimately eliminated during the Las Vegas round. Determined to achieve success, they eventually decided to try out for yet another competition, this time- MTV’s America’s Best Dance Crew.

The brainchild of Karen and Howard Schwartz, America’s Best Dance Crew is produced by Randy Jackson- a record producer who is probably most widely known for being a former judge on American Idol. Originally developed under the title World Moves, the show was hosted by Mario Lopez; TV personality Layla Kayleigh acted as the backstage correspondent. Directed by Michael Simon, the competition dance series’ original judging panel consisted of Lil’ Mama, JC Chasez, and Shane Sparkz; other artists were brought in as judges in the subsequent seasons.

Each season, the show invites a number of dance crews to showcase their talents on stage for a chance to win a grand prize of $100,00 as well as the coveted America’s Best Dance Crew golden trophy- which features a b-boy performing a freeze. Every week on the competition, the dance crews are given a different challenge- although they often share a general concept or theme. At the beginning of each episode, Lopez starts off by revealing which groups are at risk for elimination and which are safe- in no particular order. The groups revealed to be in the bottom will then dance their routines, their fates on the show up to that of the judges’ panel.

Unique to the show, each dance crew in the competition is given a crew banner- a representative logo that is shown during performances and interviews. When a group is eliminated from the series, their respective banner also falls from the top to the bottom of the stadium. As this happens, the crew is also given one last chance to dance it out on the stage.

The JabbaWockeeZ Through the Different Challenges 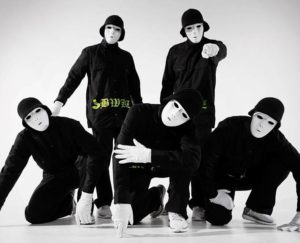 For the first season of the show- which the JabbaWockeeZ partook in, auditions for competitors were held in four different cities, Los Angeles, Chicago, Atlanta and New York City. Following a successful try out, the hip hop crew found themselves representing the West Coast in the competition. As one of the many contenders for the $100,000 USD prize, they went up against a dozen other dance groups including Automatic Response, Femme 5, Kaba Modern, Live in Color, The Movement, Status Quo, and Fysh n Chicks- all of which represented various regions in the United States.

For the first episode, which premiered on February 7, 2008, each of the twelve teams were told to dance to a mix of their favourite songs. For this round, they competitors were divided into three groups- after their on stage performance, one is then deemed safe by the judges for the next challenge. Grouped together with Fysh n Chicks and Live in Color, the JabbaWockeeZ danced to Timbaland’s Apologize (Feat. OneRepublic); they eventually came out safe, as Enigma Dance Kru was eliminated from the show.

During the second episode entitled, Music Video Moves, each dance group was shown a different MV with a unique dance moves- which they must then perform in their own style. For this round, the JabbaWockeeZ danced to Ice Box by Omarion; safe from elimination, they ultimately advanced to the next stage while Femme 5 found themselves departing the competition. For episode three, the groups were told to dance to a “dance craze”, all while completing various physical challenges; for JabbaWockeeZ, they were told to create a routine that produces an illusion of defying gravity. As before, the San Diego-based group ultimately found themselves safe from elimination.

For the next round, each of the remaining dance teams were told to portray a different characters through their routine. While some of their fellow competitors were told to portray tuners, basketball players, and vampires, the JabbaWockeeZ found themselves portraying thieves in their dance to 50 Cent’s, Ayo Technology (Feat. Justin Timberlake). At the end of the episode, Live in Color and Fysh n Chicks ended up in the bottom two, with the latter later being eliminated.

In honor of the 25th anniversary of Michael Jackson’s studio album, Thriller, the fifth episode saw the groups performing to different tracks from the disc; not only that, but they were also required to incorporate some of the star’s signature moves into their performance. Selected to dance to P.Y.T. (Pretty Young Thing), the JabbaWockieZ ultimately ended up in the top three, safe from elimination while Fysh n Chicks’ banner dropped to the bottom of the stadium.

During the sixth episode, the competitors each had to translate a traditional Broadway production into a dance routine- some of the musicals featured include Hairspray, Grease, and Dreamgirls. For JabbaWockeeZ, they danced to the Chicago hit, All That Jazz, which landed them in the top two. Having successfully advanced to the semifinals, the group found themselves going up against Kaba Modern, and Status Quo in a challenge where they all had to highlight the evolution of street-dancing over the past three decades. Although their performance landed them in the bottom two, they ultimately pulled through and made it to the final round which aired on television on March 27, 2008.

For the Live Finale, the JabbaWockeeZ teamed up with Status Quo for one final performance to Stomp the Yard instead of going head-to-head. The last episode also saw the return of the eliminated dance groups for one final regional collaboration. Eventually, the JabbaWockeeZ were hailed as America’s Best Dance Crew winner, which earned them $100,000 and the coveted golden trophy.

With their newfound fame from winning the series, the JabbaWockeeZ went on to perform in a number of shows including So You Think You Can Dance, Dancing with the Stars, Live with Regis and Kelly, and The Ellen Degeneres Show.

The dance group has performed numerous times over the past year. For one thing, they have regular shows at the Jabbawockeez Theater at MGM Grand Hotel & Casino in Las Vegas, Nevada. Not only that, but they’ve also been performing at the MGM Grand Garden Arena earlier this year. If anything, they’ve been making a comeback these past couple of years (they only performed a few times from 2014 to 2019).

For those who’d like to see their performance, they still have many shows later this year at the MGM Grand Las Vegas. From October all the way to December 2022, they will be performing two shows a day—one at 7 PM and another at 9:30 PM. If you like to check it out, you can purchase tickets here. The prices start at $49.99 and go up to $110.00 for front-row seats.

That’s not all, they also performed at the 2022 NBA Finals Halftime. And since 2010, they’ve also been working with The Bangers, a San Jose-based production group who released their first joint single, “Robot Remains”. In fact, they’re the ones who scored the soundtrack for their current “TIMELESS” production.

For more up-to-date news on the dance crew, you can follow them on Instagram at @jabbawockeez. They’re also active on Twitter (@jabbawockeez) where they have more than 347K followers.