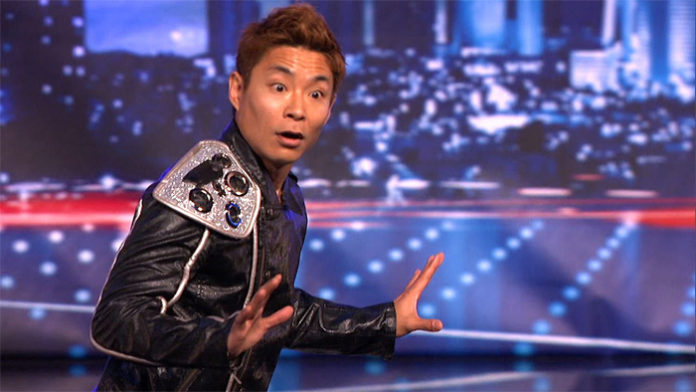 Kenichi Ebina is best known for winning the eighth season of the NBC reality competition, America’s Got Talent. The first Japanese winner in the show’s history, he is noted for his unique, self-taught solo act which incorporates multiple elements of storytelling, dancing, and acting. Born in Japan, he founded a Japanese dance group called BiTriP in 2001, with whom he participated and later won the championship of Apollo Amateur Night. Several years later in 2006 and 2007, he returned to the competition as a solo dancer in which he once again emerged as the grand champion both times. To this day, Ebina remains to be the only winner who has won the show two times. Continuing to perform over the next few years, he eventually auditioned for the eighth season of the popular NBC talent show, America’s Got Talent in 2013. Having successfully wowed the judges with his Matrix-style performance, he was soon sent right through to the live rounds held at New York City’s Radio City Music Hall.

Putting himself out there on stage, Ebina continued to amaze judges and audience members over the next few weeks. Before long, he was competing against other competitors during the show’s live finale. Following a stunning mime performance, the dancer was announced as the season winner on September 18, 2013- making him the second foreign act to have ever won the talent competition. As the champion of the eighth season of America’s Got Talent, Ebina was given the top prize of $1,000,000. A year after his win, he was also invited to perform during the Quarterfinals of the show’s ninth season. While he was competing in the NBC reality series, he also appeared in a handful of TV specials such as Crossroad (2013), Home & Family (2013), and the Japanese documentary, Jonetsu Tairiku (2014). Known around the world for his unique performances, Ebina has also appeared on television in China, South Korea, Brazil, and the UK, among many other countries.

Since the beginning of his career as a performing artist, Ebina has taken to the stage at sundry events; for instance, he has performed at a Cirque du Soleil Special Show, an NBA Basketball Halftime Show Tour, as well as a private party held for various big-name celebrities such as Simon Cowell and Madonna. A one-of-a-kind dancer, the Japanese-native has amassed a number of awards under his belt and has choreographed and directed numerous projects for a number of theater and dance companies throughout the years. As a dance instructor, he has also taught in well over thirty different countries around the world.

So what has the former winner of America’s Got Talent been up to these days? What has been keeping him busy as of late? Can we expect to see him once again on screen in the near future? What happened to Kenichi Ebina? Where is he now in 2018? 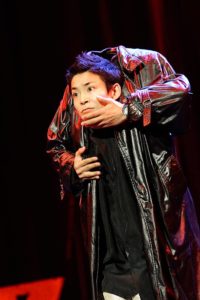 Born on May 25, 1974, Kenichi Ebina was raised in Japan, where he spent most of his early life. At the age of twenty, he made the trek over to Connecticut to study abroad at the University of Bridgeport, where he later earned an Associates of Arts in General Studies in 1998. From there, Ebina eventually attained a Bachelor of Arts in Mass Communications from the same institute in 2000. Although dance was never something that he had explored as a child, he developed a keen interest in the art while attending university. A self-taught dancer, he started out with Freestyle Hip Hop before later branching his style to Contemporary dance, Jazz, Mime, and Lockin’. Eventually wanting to create his own dance group, he formed BiTriP with a team of Japanese dancers.

After performing together for several months, they auditioned for Apollo Amateur Night where they later emerged as the grand champions- making them the first Japanese performers to have ever achieved the title. In addition to his achievements on stage, he was also invited to speak at the annual TED Talks in 2007- a conference attended by thousands of big-name celebrities; at the event, he was also joined by former US Presidents, Nobel Prize Winners and a number of other prominent figures. Aside from being a dancer and speaker, Ebina is also an instructor and choreographer, with dozens of credits to his name all over the world.

Kenichi Ebina in Showtime at the Apollo

Prior to achieving fame in America’s Got Talent, Ebina had participated in the Amateur Night Competition several times- an event made popular the Manhattan’s famous Apollo Theater. The highlight of Showtime at the Apollo, a syndicated music TV show, it saw a number of contestants from comedians to singers during its run. Upon taking to the stage, competitors perform their routine after which they are judged by the audience; while talented individuals receive vigorous applause, the opposite were often harshly booed. Originally premiered on September 12, 1987, Showtime at the Apollo was a long-running series, having been on air for over two decades.

As mentioned previously, Ebina and his Japanese dance crew BiTriP took home the winner’s title at Apollo Amateur Night in 2001. But that’s not all that he’s accomplished on the show. As a solo performer, he also successfully won the competition two consecutive times in 2006 and 2007. To date, he remains to be the only competitor who has won the grand championship title two times.

Kenichi Ebina on America’s Got Talent 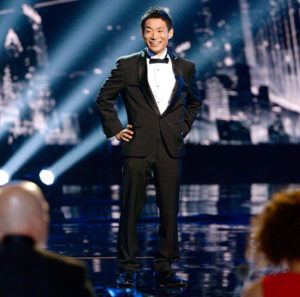 The brainchild of Cecile Frot-Coutaz, Ken Warwick, and Simon Cowell, America’s Got Talent features a number of performers from dancers to magicians, all of whom compete for a chance to win the big prize of $1,000,000. From season three onward, the winner also received an opportunity to headline a show on the famed Las Vegas Strip. Although the show consists of a judging panel who are responsible for choosing talents, it’s unique in that audience members also have a say in the results via a public vote. A popular format, it has been used successfully in a number of similar shows both in the UK and the US.

A competitor on the show’s eighth season, Ebina faced off against a number of fellow contenders such as Jimmy Rose, Cami Bradley, Taylor Williamson, and the operatic trio, Forte. The season’s judge panel consisted of Howie Mandel, Howard Stern, Heidi Klum, and Mel B- the last of whom replaced Sharon Osbourne following her departure.

Like the seasons before it, a number of auditions were held at various cities across the country including New York, New Orleans, Chicago, Los Angeles, and San Antonio; Ebina ultimately tried out in Chicago, having performed a Matrix-inspired “dance-ish” routine on stage that immediately wowed the judges, he eventually left the stage having received an unanimous “yes” from all of the four judges present. Unlike the majority of the other competitors, Ebina was then automatically advanced to the live rounds held at New York City’s Radio City Music Hall; he did not have to participate in the second round of competition coined as “Las Vegas Week”.

For the Quarterfinals which kicked off on July 23, 2013, Ebina performed an impressive mime, which saw him swimming, conquering a robot, fighting monsters, and stumbling upon a fire breather. Also wow-worthy was the fact that he utilized a video screen behind him, to feature the characters that were all acted out by himself. During the round, he went up against several competitors including the Chinese-American dance troup, Mitsi Dancing School, the brother-sister music duo Brandon & Savannah, singer Deanna DellaCioppa, and impressionist Jim Meskimen, among numerous others. At the end, he alongside opera singer Jonathan Allen and show choir American Military Spouses Choir made it to the next round. 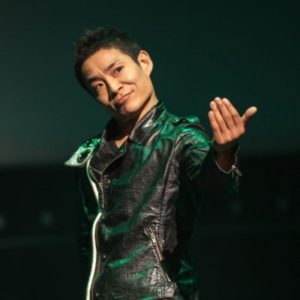 During week two of the Semifinals that took place between September 3-4, 2013, Ebina once again performed a mime. Utilizing a projection, he fought a battle against himself, a performance that quickly garnered votes from audience members; before he knew it, he had been voted into the Top 12. Aside from him, the acrobatic group Chicago Boyz, singer Branden James, Comedic hand-balancing duo KriStef Brothers and country singer Jimmy Rose also advanced forward in the competition.

The next round that took place on September 10, 2013 saw two guests- Olate Dogs and Terry Fator. Going up against eleven other competitors, Ebina performed tenth which saw him putting together an interpretative dance routine about death, love, and the afterlife. After everyone’s respective performances during the Top 12, only six contestants remained including Taylor Williamson, Collins Key, Cami Bradley, and Jimmy Rose.

For the long awaited finale, each of the six competitors performed two acts; the first was an updated version of a previous performance while the second featured entirely new material. For his new routine, Ebina performed a matrix-inspired martial arts dance; he then went on to dance and interact with himself as eight different characters on a projected video screen behind him. He was later joined by guest performers Heather Headley and the classical crossover vocal group, Il Divo. Following the two dance routines on September 17, 2013, it was announced that the Japanese mime was the winner of the eighth season of America’s Got Talent. Not only was he the first winner of Japanese origin, but was also the first dance act to win the whole reality competition. As winner of the show, he was given a cash prize of $1,000,000.

Kenichi Ebina After His Win on America’s Got Talent

A year after his win, the Japanese performer was invited to the Quarterfinals of the show’s subsequent ninth season, where he gave a performance similar to that of his audition dance routine. According to the dancer himself, the routine was also a demonstration of an app that he was working on at the time- called “Dance-ish Me”, which was later released in 2014.

That same year, he also released his first book- albeit in Japanese entitled 見せ方ひとつで世界でも勝てる. Making his first appearance on television since his win, he later also appeared in the Japanese TV documentary show, Jonetsu Tairiku.

Kenichi returned to television in the first season of America’s Got Talent: The Champions in 2019. A spin-off of the original, it involved a variety of participants taken from the Got Talent franchise, including finalists, winners, and other notable entries. Despite putting on a great performance, however, he didn’t receive enough votes to go to the finals. He ultimately finished in fourth place.

Since then, he hasn’t been back on the show. Rather, he’s been performing across Japan. According to his official website, he will be performing in the Saga and Mie prefectures later this fall. He also performs many corporate events, however, they’re not listed on the site.

For those who’d like to book an event, you can do so via his website here. Kenichi is also on Cameo for those who are looking for a customized video (starting at $90).