Hire Santa After Shark Tank Update 2022 – Where Are They Now 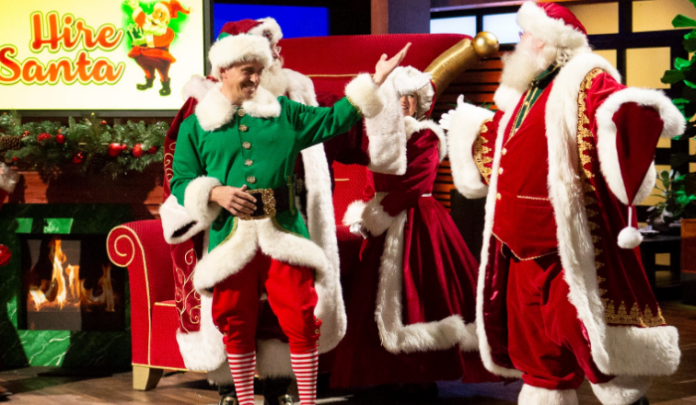 Mitch Allen came up with the idea after an assistant told him to dress up as Santa for their company’s Christmas party. The COO dressed up as Rudolph and together, the two handed out Christmas gifts and bonuses. That same year, a friend asked if he could dress up as Santa for their one-year-old. While he admitted that he isn’t the best-looking Santa, he had a lot of fun.

As he continued to dress up, people started offering to pay for his appearances. And that’s when he got the idea of turning it into a business. He bought the ‘hiresanta.com’ domain in 2012 and quickly got more business than he could do himself. To solve that issue, he decided to outsource the gigs to other Santas. Optimizing his website for the keywords, ‘Hire Santa’, his business quickly took off. Before he knew it, he was sending Santas all over the United States and eventually, to other countries as well.

Still, he felt that they didn’t have enough Santas.

Fast forward to 2018 and he saw that there’d be a casting call for Shark Tank in Dallas. Wanting to try his luck, he headed over to the small business expo, where he stood in line with about 500 other people. After waiting all day, he was able to get an audition in front of six casting agents.

Once everything was finished, the agents told him that they would be contacting him in “a month or two” with their decision. To his surprise, however, he got a call back within a week. With that, he started working on his pitch. He’d even have weekly calls with the show’s producers.

Mitch eventually appeared in the seventh episode of the tenth season, which aired on December 2, 2018.

Dressed in an elf costume, Mitch walks into the tank accompanied by Santa and several others. After wishing the Sharks a Merry Christmas, he introduces himself as Mitch Allen, the ‘founder and head elf’ of Hire Santa, and lets them know that he’s here to seek $200,000 in exchange for a 10% stake.

Jumping right into his pitch, he tells them that he started his company, Hire Santa because Santa ‘can’t be in a lot of places at once.’ And with that, a group of Santas appear from the doorway, all perfectly dressed up. A few of them even give the Sharks some Santa hats to wear.

Continuing, Mitch explains that Hire Santa uses ‘Santa’s friends to spread the holiday cheer whenever you need him.’ That with their company, anyone can get a visit from Santa—‘even if you’re on the naughty list’.

As the Santas disperse throughout the tank, Lori asks how much it costs to hire one of the entertainers. Mitch tells her that it depends on the occasion—that hiring a Santa during the holiday season is different from hiring them to visit your home. And that as far as pricing goes, personalized visits cost between $200 to $300 and that longer engagements start at $50 an hour.

Emphasizing the fact that they’re an online database, he tells the Sharks that they have ‘thousands’ of professionally-trained Santas and that they’ve actually sent them to several different countries around the world.

Asked how they make money when their business centers around the holidays, Mitch replies by saying that they have six weeks from November all the way up to December, during which they send their Santas out. He also talks a bit about their backstory—how he’d come up with the idea after being asked to dress up as Santa on several occasions. And that when he wasn’t able to handle all the business, he decided to branch out.

Daymond goes on to ask about how they source their Santas. Mitch explains that there’s a huge Santa community online and that it all boils down to networking and marketing. Mark then asks about their total revenue. Mitch tells him that a year ago, they did $189,000 and that last year they did $331,000. And that this year, they plan on doing $1 to $1.4 million.

The high projection surprises the Sharks and Kevin ask how they plan on increasing their revenue by four times this year. Mitch explains that they’ve already gotten a contract with one of the largest outdoor retailers and that that is going to make up most of their revenue.

Asked how they’d use the $200,000, Mitch lets them know that they’ll be using it for some ‘strategic hires’ and that they also plan on upgrading their online training videos. Mark then asks about the company’s profitability. Mitch reveals that they made $70K in net profits the first year, $154K the second year and that it’ll be between $350K and $450K this year.

While Lori admits that the idea is great, she finds it difficult investing in a company that only operates six weeks a year and for that reason, she drops out. With that, everyone’s attention turns to Mark. Like Lori, he likes the idea but finds their business model a bit too competitive, and with that, he also drops out.

Daymond gives a similar response; that he finds the business difficult to invest in and because of that, he will also be pulling out.

Barbara does the same, stating that they only have a small window each year to make revenue. With four Sharks out, everyone turns toward Mr. Wonderful, who is the only one remaining, and to Mitch’s relief, he seems interested in making an offer. He goes on to offer $200,000 for a 50% stake, which Mitch finds to be too high. He makes a counteroffer of $200,000 for 15% of the business.

Just as Kevin is about to make a counter of his own, Mitch presents him with another offer—$200,000 for a 50% stake, which drops to 10% after the investment is recouped. Kevin states that he likes the deal, but would like to tweak it to 20%.

As Mitch is contemplating his offer, Daymond suddenly comes back, stating that he’s willing to give him the initial offer. With that, Kevin tells him he’s willing to do it at 15%, which prompts Daymond to also bump his offer up to 15%.

As the Santas clap and cheer, Barbara walks up to give Mitch a hug. He goes on to thank her again before leaving the tank.

Mitch was able to land several large clients after appearing on the show. His deal with Barbara was also finalized. By the end of 2018, the company had earned $1.4 million, which was within their original projections. They also used the $200,000 to hire some marketing staff.

And in 2019, he returned to Shark Tank for an update during the Season 11 Holiday Special. In the episode, Mitch and Barbara are seen surrounded by a group of Santas. They visit Bloomingdales in New York, which agree to work with for the holidays. The pair also met with a store executive to close the deal, after which they participated in a few Santa auditions.

While pandemic-related lockdowns affected Santa displays in many areas, the demand for Santas was still there. Instead of offering in-person visits, the company offered Zoom visits for $49, which was much cheaper than Santa’s original rate. They even had pre-recorded videos available.

As of 2022, they also offer personalized letters from Santa. There are three different ‘packages’ that you can get: gold, silver, and platinum. Gold packages include a personalized letter from Santa, a return address from the North Pole, as well as a genuine North Pole Stamp while silver packages come with all that plus a nice list certificate, a photo of Rudolph, and a photo of Santa with a baby elf. As for platinum packages, they include everything from the gold and silver level plus Mrs. Claus’ sugar cookie and tin, Rudolph’s sleigh bell, and an elf candy cane.

For those who are interested, you can check out their website here. If anything, it’s never too early to find a Santa for the holidays. And for those who have the ‘Santa look’, they’re also hiring for the 2022 season.