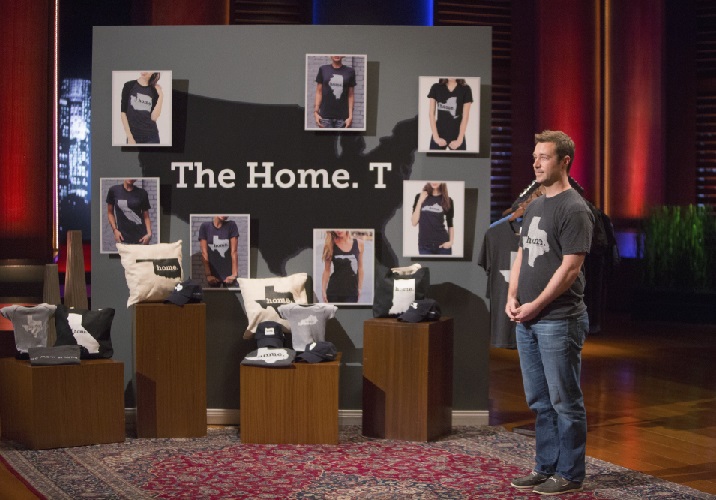 In 2010, Ryan Shell was missing his home in North Carolina. Living with his wife in New York city he constantly found himself longing for the little things that made his home state so unique and welcoming. That feeling of missing home is what led him to the idea of producing and selling a T-shirt for every state. He founded the Home T business and based on the positive reaction that the shirts had on people when they saw him wearing one, Ryan believed that there would be a huge demand for them.

Ryan’s instinct was correct, and he soon found a huge market for his T-shirts, but he still wanted to move his business to the next level. Seeking a shark for a partner, someone who could open doors for him with big retailers, and ease his companies growth, seemed like an idea without any risks to the business, and in March 2015 Ryan appeared on Series 6 of the show.

When he came before the sharks Ryan was hoping for a $250,000 investment in exchange for 5% of his business, a huge valuation for the company of $5 million.

He began his pitch by explaining to the sharks how he had found himself in New York City and had missed his home state of South Carolina. He missed the people, the accents, the sweet tea and the barbecues. He had created the Home T and had soon noticed that people would love the shirt when they saw their own home state. He began selling the T-shirts online and was immediately flooded with orders.

He handed some of his ‘insanely soft’ shirts to the sharks and Lori remarked that they were particularly soft. Robert Herjavec however, wasn’t softened up by it at all, he asked how the company could be worth $5 million.

Ryan revealed that in the first twelve months of business, the company had made sales of $1.1 million. The sharks were surprised at such an impressive level of business and Robert remarked ‘Well, you shut me up.’

Kevin O’Leary dug a little deeper and asked what Profits Ryan had achieved from the sales. Ryan confirmed that the business had made $540,000 in profit. Kevin inquired if there were other people in the business, Ryan told Kevin it was just him alone who had run the business from the beginner.

Lori asked Ryan why he thought the business had done so well and Daymond suggested that Ryan was just an excellent salesman with superb PR skills.

Mark Cuban asked what Ryan’s background was and Ryan admitted that he was a marketing consultant and his previous job had been with an agency. Daymond seemed to think this was confirmation of his own theory and remarked ‘There you go’.

Kevin O’Leary spoke to Ryan ‘So you’re a fantastic salesman and a great marketer, but the product isn’t protected’. He asserted that anyone could copy the idea and do it themselves without any copyright infringement. The company wasn’t worth $5 million in his opinion.

Ryan was always prepared to defend his business to the sharks, and told Kevin that Home T was a brand itself. Kevin interrupted him ‘It isn’t a brand’. Kevin pointed out that he could just invest $5 million in his own T-shirt company, he didn’t need Ryan.

Daymond John, the fashion and clothing expert among the sharks, was completely in agreement with Kevin, he told Ryan ‘You can’t protect any of this’.

Robert was still curious at the success of the company, he urged Ryan ‘Help me understand how you’re killing it’. Ryan told him that word of mouth advertising had achieved great results for the company.

Mark Cuban asked how he had got the ball rolling with that type of promotion. Ryan explained that it had literally been a case of a few sales, customers promoting the shirt on their own social media accounts, and sales had quickly snowballed from there.

Robert Herjaved asked ‘So it’s a grass roots movement?’ and Ryan agreed it was. He revealed that he had later begun advertising on Facebook, and Daymond asked how much had been spent on advertising the year before. Ryan confirmed the cost had been less than $5,000. Daymond looked impressed.

Mark Cuban was still suspicious, he told Ryan ‘That’s great, but I’m still not buying the word of mouth thing’. And Robert Herjavec was in full agreement with his fellow shark.

Daymond asked Ryan why he had come to the shark if he had already made $1 million. Ryan explained that he wanted to grow the business, he wanted to hire people and he needed the help of a shark to take the business any further.

Kevin O’Leary had reached a decision, predictably it wasn’t a positive one for Ryan. Kevin thought T-shirts were just a commodity, Ryan was a great salesman but the company wasn’t worth $5 million. Kevin asserted that he lived on Planet Earth and a T-shirt business would never be worth so much, Kevin was out.

Daymond suggested that Ryan hadn’t come to the tank seeking a deal, rather he just wanted some free publicity. Ryan denied that, although he did admit that the 5% equity figure was a ‘starting point’ for negotiations. Lori asked what percentage he would be prepared to offer, and after some thought Ryan informed her he would be comfortable with ten to fifteen percent.

Daymond still thought that Ryan was not serious about a deal, he told him so, and also dropped out, completely put off by the high company valuation.

Ryan repeated that he was looking for a deal. Daymond told him that the product would be copied within three years and Ryan should just take the money and run.

Mark was ready to run, he told Ryan that he had a good product, but Home T wasn’t an invest-able company. Demand would eventually dip and the business was only short term in his opinion. Mark was out too.

Robert couldn’t understand how Ryan was achieving such great sales, he agreed with Mark Cuban that the demand would dip in the future, but the sales spoke for themselves. Robert had an offer for Ryan, he would invest $250,000 in exchange for 35% of the business.

Lori Greiner was quick to give Ryan a second, improved, offer. She would invest the required $250,000, but in exchange for only 30% equity. Ryan looked less than happy with both the offers available to him.

The T-shirt entrepreneur was unable to grasp Lori’s calculations, he could not accept that his company was worth only just over $1 million. There was some more discussion between him and the sharks and he again suggested that he would be ‘comfortable’ giving away up to 15% of the business in exchange for the required investment.

Robert Herjavec could see that Ryan’s valuation of the business was a long way from his own, he wished Ryan good luck, but withdrew his offer and dropped out of the negotiations at this point.

Kevin O’Leary asked the harassed looking Ryan what he was going to say to Lori’s offer. By now Ryan was beginning to sound like a broken record, he began talking about the valuation yet again but Kevin cut him off. ‘Make a counter then’ he almost barked.

Whether it was the pressure finally getting to him, or whether it was some other strategy, Ryan made a strange counter offer to Lori. He suggested a 10% equity share for a massive $400,000 investment. Kevin O’Leary and Robert Herjavec almost choked in surprise. Kevin heatedly asserted ‘It’s a T-shirt company’ and it was clearly the last straw for Lori too. ‘I’m sorry, I’m out’ she confirmed, although by then she may have just said that to stop Kevin from exploding in anger.

Ryan thanked the sharks and turned to leave the tank. As he did so, Daymond suddenly made a last second offer. He would supply the $250,000, in exchange for 20% of the business. It was the best offer made so far, and very close to the 15% equity level that Ryan had suggested would be acceptable for him.

Ryan spoke again about his confusion over such a low valuation. He simply could not understand how a company with over $1 million in annual sales, could be valued at only just over a million.

Eventually Daymond’s patience ran out. He withdrew his offer, leaving Ryan and the Home T business without any kind of deal from the show.

As Ryan left the tank, Kevin Mark and Daymond continued to argue over Ryan’s motives.

Ryan seemed genuinely disappointed, and slightly overwhelmed after the show, he commented that he was unsure if he should have offered a higher equity figure. He added ‘Maybe I just completely screwed that up, I don’t know.

Ryan revealed in a later interview that he had rejected Daymond’s offer as he only offered him $250,000 for 20%, which put the value of his company at $1.25 million. He felt that it was way too low as they had already done $1.25 million in sales back in 2014. The fact that he was under pressure to accept the deal on the show didn’t help either.

Despite all that, he has managed to grow the company over time. As of 2022, Home T is still up and running. Not only do they offer home state t-shirts, but they’ve expanded their selection to include other designs as well. Some of their top picks include “Style and Grace”, “Chicken Butt”, “Girl Boss Queen Elizabeth II”, “Thankful”, “Spooky Vibes”, and “Skeleton Yoga”, all of which go for $32 on their website.

That’s not all, they also have a Family series (e.g. Mom Life, Dad Life), a Sport series (e.g. Basketball, Hockey, Soccer, Game day), a Holiday series (e.g. Halloween, Mother’s Day, Father’s Day, Christmas), and a Causes series (e.g. Pride, Call For Change, Alzheimer’s). If you want, you can even customize your own—not just crewneck and v-neck tees, but hoodies, and sweaters as well. There are six sizes to choose from and you can pick from four different colors: dark grey, grey, white, and navy. From there, you can add your own text, images, or art. The best part? Their custom t-shirts are the same price as their regular t-shirts.

And for those who are wondering, they do have a sales section where you can snag some items at a lower price. For instance, at the time of this writing, they have several t-shirts marked down from $32 to $22.95. They also have a promotion where if you buy three t-shirts, you’ll get the fourth one for free.

As far as shipping goes, it’s free if you order more than $100, otherwise, there’s a flat rate that increases with every item added to your cart (most orders are shipped within 2-3 business days and will come with a USPS tracking number).

The bottom line is, that the company appears to be doing quite well without the shark’s help. If anything, that goes to prove that you don’t always need an investment from the show to become successful.