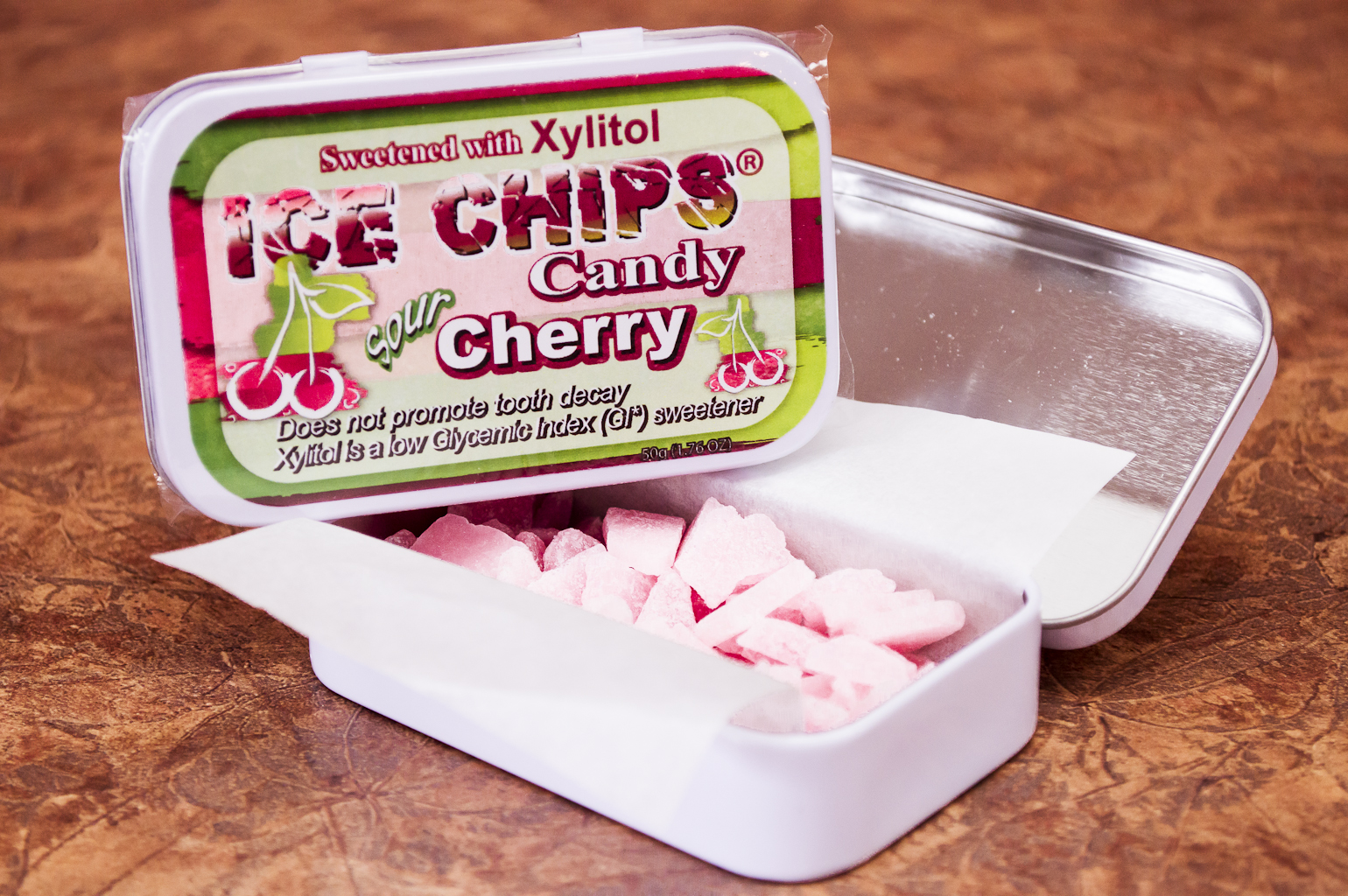 Before Starting Ice Chips, Beverly Vines-Haines was a romance writer, and both of them started a business selling all-natural body products. After a couple of years, they moved to making Xylitol candy. They got their shop building and a couple of employees. Their daughter in law submitted an application to the Shark Tank without Beverly and Charlotte’s knowledge. They got a called back for an audition, but would the Sharks bite on their candy idea? 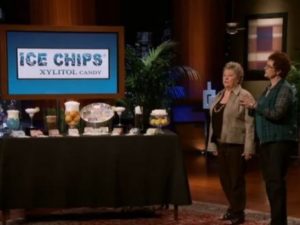 everly Vines-Haines and Charlotte Clary introduced themselves in their audition tape. They were older women, and the video started in a farm-like setting in Washington. As what I can only assume was family played basketball in the background, the women bragged about having 37 grandchildren. Beverly said that they’d developed a business making and selling mints while their peer group was joining knitting circles. The tape flashed to young people in a production area, quickly separating tins, and pouring a liquid into molds. Charlotte said that the business was growing so fast that they employed their husbands. Their grandchildren were also learning the value of hard work by working in the facility as soon as they were old enough.

In the next shot, Charlotte sat in from of a computer, while handwriting a phone order as Beverly narrated their dilemma. She said that since they were growing so fast, the entrepreneurs behind Ice Chips could not continue hand-crafting their mints. The video ended with a scene of the family around a campfire.

Beverly and Charlotte walked out onto the stage, and into the Shark Tank. They introduced themselves and asked the Sharks for $250,000 in exchange for a 15% equity stake in Ice Chips. They told the Sharks that the sweetener they use in their mints, xylitol, is the most popular artificial sweetener in the mint world. Beverly claimed that Ice Chips are “the yummiest, healthiest xylitol mints on the market.” Charlotte insisted that most sugar-free candy tastes awful, like “petrified flour.” The made Barbara giggle. Charlotte continued, saying that their 17 different flavors of Ice Chips all taste amazing. She also claimed that the mints were good for adults and children.

Beverly agreed, stating that dentists love xylitol because germs and bacteria can’t grow on it. She said that she thought by this time, they would be spending quality time with their 37 grandchildren. The Sharks all looked shocked and impressed at the number. Charlotte cut in, saying that they were spending all of their time on their business. She stated that they’ve grown far beyond just two “grannies in a garage.” Beverly stated that their only sacrifice was spending time with their friends quilting and scrapbooking.

Barbara complimented the ladies on their presentation as Beverly and Charlotte handed out samples. Robert tried one and said it tasted great. Charlotte told Kevin that Beverly thought that she used to babysit her. Barbara stated that the mints don’t taste sugar-free. Robert asked Beverly and Charlotte if Xylitol is all natural, and they told him that it was. Robert stated that he has never seen that type of candy before. Beverly stated that dentists and health food stores were their primary wholesale markets. She continued, stating that they only use American Xylitol, which is made from birch bark.

Barbara asked if there were any side effects to xylitol. Beverly said that you could experience some tummy trouble, but only if you ate the whole tin. Daymond asked what she meant by “stomach distress.” Diarrhea, Beverly clarified. Robert put his sample try down, looking bothered. Daymond said that he just wanted to make it clear that it would not have a laxative effect. Beverly stated that it did not. Daymond told the Sharks that they could continue to eat the mints. Kevin wanted to know why the ladies were valuing Ice Chips at $1.6 million. Charlotte said that as of the week, their total sales for Ice Chips for the year came up to $304,000. They had done about $350,000 the last year. Robert told her that the numbers were fantastic. Kevin asked what their projections were like for the end of the year, and Charlotte said that they might hit the million dollar mark.

Daymond told the ladies that he was very impressed with their numbers. He asked them what it cost to make, as well as the retail price. Charlotte said that it costs $1.11 to make. It wholesales for $3, and the retail price is around $5, depending on the store. Daymond asked them if they were just opening more accounts, or if they were getting repeat orders. Charlotte assured him that it was both and that they get 10-12 new accounts every week.

Robert asked why the mints came in flake form, and Charlotte asked if he wanted the honest answer. Robert laughed a bit and told her that he wanted her to lie to him. Charlotte said that they weren’t able to press them into a mold, so they improvised. Robert asked if they were serious. Beverly said “they,” said that you couldn’t make a hard candy from xylitol, but they were able to make a product that everyone loves. Their customers like the name and the shape of the Ice Chips. Robert wanted to know what their background was like previous to their mint business. Beverly told him that she was a romance writer. Charlotte told the Sharks that she had a B.A. in science and natural health.

Daymond asked about their competition. Beverly said that their biggest competitor had a different product altogether. Daymond wanted to know if the product was only sold in health food stores, or if they were also sold in convenience stores. Beverly told him that that was a distribution problem that they experienced, but they were in many grocery stores. Daymond asked them why they were on the Shark Tank since they already knew their market, and we’re making money. Beverly said that they wanted to scale up so that they reduced their margins. Kevin clarified for her, saying that they wanted the money for the machines.

Robert said that they should be good to go once they employed their army of grandchildren. Barbara stated that she loved that they had multiple sized chips since you can pick how large or small of a piece you wanted. She wanted to go on a sales call with the ladies, just to see what how they would handle it. She offered them $125k, which is half of their ask, in exchange for 33% of the business. Robert told her that the offer was crazy. The two looked disappointed. Daymond told her that she was vicious, but Barbara denied it. She said that she could guarantee that she could get Ice Chips into 3,000 big box stores.

Daymond told the ladies that they should take out their dentures and throw them at Barbara for her insulting offer. Barbara asked them to consider how long it would take from them to get into the big box stores, but Daymond insisted that it would not take long at all. Kevin said that he wanted to offer up the other half, and also talk her back on the valuation. HE offered $120,000, and 20% equity each. That way they were talking 40% of the business instead of 66%. Barbara said that she was willing to rethink the value, but not while working with Kevin. She stated that he was awful to work with, and entirely focused on money. Barbara said that she would work with literally anyone else.

Kevin stated that he provided value already by talking her into a reasonable valuation. Daymond stated that he would be interested. He offered the full $250,000 in exchange for 30%, and he did not want them doing their manufacturing anymore. Charlotte asked what other offers were on the table. Kevin told them that he was heartbroken that his value was not being recognized by the grannies. Mark said that he was open to working with Barbara for the $125,000 for 20%. Barbara told them that she had been hoping that Mark would jump in with her. She stated that he was the best Shark to work with, other than her.

Robert went out, saying that they were getting a better deal from Mark and Barbara. Kevin stated that he wanted back in, and said that he would go in with Daymond at $125,000 for 35% total. He claimed that Barbara and Mark were just greedy. Daymond indicated that it might sweeten the deal. He was trying hard to make a pun. Robert asked Beverly and Charlotte which pair of Sharks they would go with. The grannies considered the offer. Daymond said that he decided to drop Kevin, and went to 25% for the $250,000. He stated that he wanted to make sure that they did not make the wrong decision. In an exciting development, the grannies still went with Barbara and Mark. Daymond said that he never liked grandmothers as Beverly and Charlotte hugged their Sharks.

Ice Chips Now In 2023 – The After Shark Tank Update

In the end, the deal with Mark and Barbara never went through. However, their appearance on the show wasn’t all for naught. Thanks to the “Shark Tank Effect”, they hit it big. Within a few days of the episode airing, they sold more than $300,000 worth of Ice Chips. This allowed them to order custom candy-making equipment to speed up the production process.

They did so well that they were eventually given an update segment, which was included in episode 424, despite not having landed a deal with the sharks. In the follow-up, they touted their new manufacturing capabilities and revealed that sales have continued to gone up since their initial appearance.

Later in 2015, they moved to a larger facility, which allowed them to automate production. They also partnered with Disney and came out with several Finding Dory-themed candies. Beverly, who was originally a writer, also wrote a book based on their experience.

That’s not all, they’ve also started to sell an Ice Chips Whitening Tooth Powder, which according to their website, kills germs and whitens teeth. Ingredients-wise, it contains a blend of baking soda, Himalayan salt, natural herbs, and essential oils (orange, peppermint, wintergreen). For those who are interested, you can get a 2 oz jar for $11.95 on their website. Refills are also available.

Aside from their official website, you can also get their Ice Chips candies from Amazon. If anything, they’re quite popular on the site with a 4.5-star rating (out of over 500 reviews). Looking at some of the reviews, most people seem to agree that they have nice flavors and that they are great for those with dry mouths.

However, not everyone shares the same thoughts about the flavors. In fact, several people have written that they’re not a fan of the taste. Many people have also written that the Ice Chips are overpriced for what they are, which is understandable, seeing as how they’re much more expensive than other similar candies.

Still, the overall consensus seems positive and as far as we can tell, the business still pulling in a decent amount of money (approximately $5 million per year).