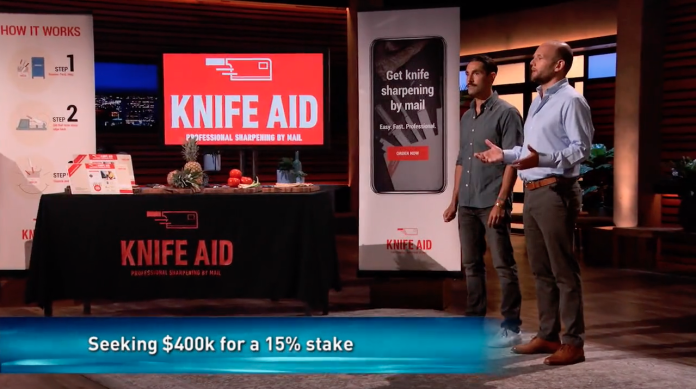 Knives are the most commonly used kitchen appliance around the world. However, they tend to get dull and wear down over time. When that happens, your only options are to buy a new knife or sharpen your dull one. Unfortunately, both options are expensive, and sharpening a knife requires learning new techniques and buying a sharpening stone.

Marc Lickfett and Mikael Soderlindh came up with an ingenious method to sharpen knives: they called it Knife Aid. Anyone can mail their knives using the special Knife Aid envelope, and within a few days, the customer’s old dull knife will be sharp as new. Knife Aid sharpens every knife they receive with care. Knife Aid-sharpened knives are always extra sharp and can slice through almost anything with ease. 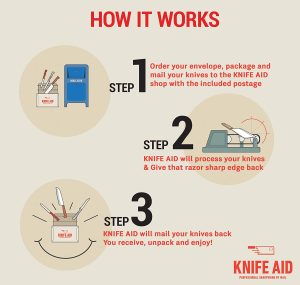 Marc and Mikael launched Knife Aid in 2018. The company sharpens any knife for the simple price of $10. Customers were happy with the knives they received and the majority of Knife Aid users are returning customers. The company provides its services through its online website. Customers order the number of knives they want to sharpen along with their sizes. Knife Aid sends an envelope with blade guards and instructions on proper packaging. After customers mail their knives, Knife Aid sends updates on the whereabouts of the knives.

Marc and Mikael wanted help navigating the market as they looked to expand and grow their company. As a result, the co-founders went on Shark Tank seeking an investment and a business partner to help get their services known to the public.

Marc and Mikael appeared on season 11 of Shark Tank seeking $400,000 for 15% of Knife Aid. They pitched their company and demonstrated their product by comparing sharp to dull knives. They had the sharks slice pineapple and a thick rope using the sharp knife and watched them fail to do so with the dull knife. The pitch impressed the sharks; they were keen to find out more.

The founders were originally in Sweden before they moved to the United States to start their business. Mikael claimed he was the founder of Happy Socks, a successful socks company that the sharks recognized. The founders were doing services similar to Knife Aid in Sweden but for kitchens and restaurants. The restaurants shipped their dull knives, and they would sharpen them and return them to the restaurant in a few days. They realized this service could be a successful business if they brought it to everyday people, so they moved to America to start up Knife Aid. 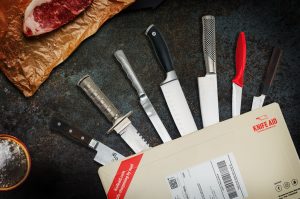 The co-founders claimed Knife Aid simplifies the process for customers by charging only $10 for any knife sent. The minimum number of knives required per order is four. Knife Aid also sharpens scissors, blades, and hunting knives for the same price. Rohan was curious why they were seeking an investment if Mikael already had a successful business and can put his own money into the company.

Mikael said his company had recently failed in the market because he wasn’t knowledgeable enough in the American market. He said he didn’t want to repeat that mistake, so he was seeking a partner on Shark Tank to make sure Knife Aid became successful. The founders said they wanted help marketing and packaging the product in addition to utilizing connections and partnering with stores and brands across the country.

Mikael claimed the company had made $120,000 in the first part of 2019. They had gotten the sales after experimentation with their website and advertising. The website was on its fourth version, and they have been using Instagram, Facebook, and Google advertisements to market their company. Knife Aid made $37,000 the previous month.

Lori Greiner had heard enough and decided to make an offer. She claimed she had contacts everywhere and was the best partner to market the company. She offered Knife Aid $200,000 upfront + $200,000 as a line of credit for 20% of the company.

The founders said they knew what they were doing with the online side of their business, but they believed there was an opportunity to expand to retail. They wanted to advertise in stores and use their mailing lists to reach a wider consumer base. Lori claimed she could get in contact with any store and set it up immediately if they partnered with her.

Kevin O’Leary, self-proclaimed Chef Wonderful, was also interested. He offered them $400,000 for 20% of the company. He claimed he had a lot of other companies that specialized in kitchen appliances, so Knife Aid would be perfect as it would allow the company to branch out. 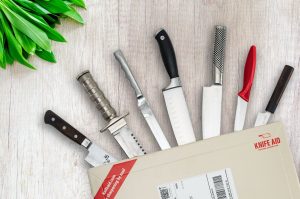 Rohan Oza joined in and partnered with Lori, making a combined offer of $400,000 for 20% of the company. He claimed his brand could get Knife Aid in any store they wanted, and combined with Lori, they would dominate the market.

Barbara Corcoran jumped in as well. She partnered with Kevin and offered $500,000 for 20% of the company. The sharks each explained why they would be a better fit for the company, each seeking to make a deal with Knife Aid.

The founders wanted to know what Mark Cuban thought and if he had an offer in mind. Mark said he was interested and stronger than the others when it came to Public Relations and Social Media. However, he said he’ll see if they wanted to make a deal with the other sharks first, and if not, he might make an offer himself.

Mikael wanted to know who was more passionate about partnering with their company. All four sharks claimed they were passionate and would make time to guide Knife Aid into the market. Mark found it silly that the other sharks were groveling to invest in the company. The founders excused themselves to discuss the offers privately.

A few seconds later, Lori followed them outside to try and convince them of her offer. She claimed she was passionate enough to follow them and ask for the deal outright. The founders appreciated that, but they wanted Lori to up her and Rohan’s offer to $500,000 for 20%. Kevin joined the entrepreneurs outside, saying he was also passionate about their company. Rohan and Barbara followed suit, joining the other sharks outside. Lori and Rohan eventually agreed to raise their offer to $500,000 for 20%, and they struck a deal with Mikael and Marc.

Knife Aid Now in 2023 – The After Shark Tank Update 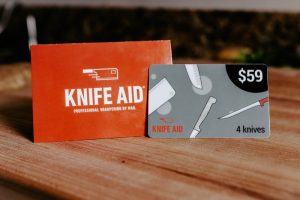 Unfortunately, the deal Knife Aid made with Lori and Rohan was never closed. However, they received a lot of publicity and exposure when the Shark Tank episode first aired. Orders started rushing in, and Knife Aid worked overtime to deliver their services. The company upped its services’ prices. The new prices ranged from $59 for 4 knives ($14.75 per knife) to $149 for 14 knives ($10.6 per knife).

Mikael and Marc are still looking to partner with major retail stores to get their mailing lists and expand their customer base. Even though the deal didn’t close, Knife Aid was able to massively increase its sales and returns on its services. The company grew bigger and was able to increase its annual revenue. In June 2021, the company reported $2 million in annual revenue. Knife Aid is expected to steadily grow and overtake the knife-sharpening market in 2023. For more updates and information about Knife Aid, visit their website here.