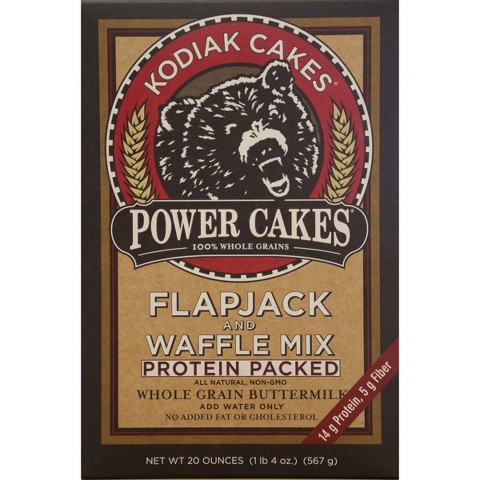 Two entrepreneurs from Park City, Utah, have come to the Shark Tank with their rendition of a favorite breakfast treat. Cameron Smith and Joel Clark of Kodiak Cakes have come to the Shark Tank, seeking a $500,000 investment in exchange for 10% of their business. Kodiak Cakes is a flapjack and waffle mix, but is unique because it’s made with 100% whole grains and no added fats or sugars. The only thing you have to do to prepare it to add water; Cameron says he promises that the Kodiak Cakes taste amazing. Even Joel says when he was only 8 years old, he went around selling pancake mix just like that of Kodiak Cakes in a red wagon. His mom always wanted to sell her pancake mix, so they decided to give it a try. Now, Joel and Cameron are determined to bring Kodiak Cakes to the next level.
Joel and Cameron then distribute samples, included with berry syrup which actually is a mix of five different berries. The berry syrup is also their product, and they actually have a line of fruit syrups as well at Kodiak Cakes. Every single Shark is impressed with the flavor, and happy with the sample; Robert even says he’d eat more, if there are any. Joel says that they receive emails and letters every day that complement the two on Kodiak Cake’s flavor. Robert then asks how far the two have taken Kodiak Cakes, and Cameron says that between the two of them so far, they have actually brought the product into Target stores nationwide.
The first order at Target was a $260,000 order, and a year after their entry into Target, Joel says they are on track to do a million dollars in sales at Target alone; they are actually on track, as that is their forecast and that has been accurate so far. Joel continues on, saying they have a low price at Target, but Target eats up a large margin of 45% of all the sales despite pushing the product out to more than 16,000 stores nationwide. They are constantly re-ordering, and Cameron says that they actually came to the Shark Tank looking for capital so that they can grow more.

In the end, Joel and Cameron say that they appreciate the offers of the Sharks, but ultimately they will decline all the offers because they want to keep the company profitable. Mark and Lori say they think the two are smart for refusing to give up so much equity, but Kodiak Cakes does not find the investment they came into the Shark Tank for.

Kodiak Cakes Now In 2023 The After Shark Tank Update

The pair might have walked out without a deal but that hasn’t stopped them from achieving success. For one thing, their popularity exploded after being on the show. This allowed them to introduce new products such as ice cream, barbecue sauce, dessert mixes, muffins, cookie mixes, and oatmeal. They also got into several major retailers and became the “official food” for Diabetic Living, Weight Watchers, and Shape Magazine, which drove up their sales even more.

By 2016, they had done more than $16 million in sales, which is impressive considering where they had started. Fast forward to 2020 and their products are available in more than 26,000 retailers across the country including Walmart, HEB, Marsh, Target, and Meijer. Not only that but their revenue has also surpassed $200 million.

It was later announced in 2021 that the company has been acquired by L Catterton, a private equity group, for an undisclosed amount. As far as we can tell, however, Joel and Cameron still work for the company; the former is the CEO while the latter is the president.

Not only that but they also sell “Kodiak Cups”, a protein-packed breakfast that’s both convenient and delicious; all you need to do is add water, stir, and microwave. And there are several flavors to choose from including Buttermilk & Maple, Chocolate Chip & Maple, Cinnamon & Maple, Chocolate Peanut Butter, S’mores, Double Dark Chocolate Minute Muffin, and Almond Poppy Seed. You can get them for $2.70 each or you can purchase an assorted variety pack for $24.30, which comes with nine different cups (the variety packs are sold out from time to time so keep an eye out).

They also have a subscription service, which comes with a 10 percent discount. Simply pick your products and they’ll ship them to your front door. Shipping is also free for all orders above $45 (in the lower 48 states) and you can cancel your subscription at any time through their website.

For more information, you can check out their website at kodiakcakes.com. They also have an active Instagram page (@kodiakcakes) with over 396K followers that’s updated regularly. Sometimes, they’ll even post about promotions on their page.