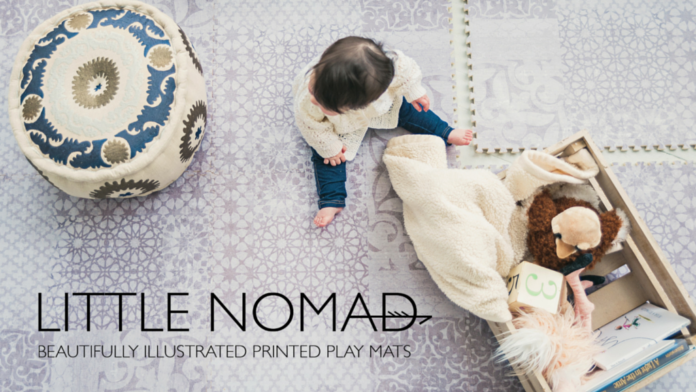 Stepping into the Shark Tank are a mom and dad entrepreneur team. They are Elizabeth Fernandez and her husband Jeremiah, along with daughter Talia. They have come from West Hartford, Connecticut, in order to seek an investment of $80,000 in exchange for 15% in their company, Little Nomad. When Elizabeth’s super-stylish BFF Marissa invited her over to check out her new home, she knew that she would be impressed. She is one of the most stylish moms that she knows, which is why she was literally horrified to see some tacky, brightly-colored surface playmats all over the floor in her living room.

Now, to be fair to Marissa, her decision to use foam flooring wasn’t un-practical. It protects her little ones from bumps and bruises, it’s water-resistant, and it’s easy to clean. So right there, in Marissa’s living room, Elizabeth had her a-ha moment to make foam beautiful. As Elizabeth narrates her story, Talia begins to cry after Jeremiah took her over to the brightly colored mats on the floor. Elizabeth picks her daughter up and comforts her without missing a step.

Elizabeth calls on Uncle Wonderful, Kevin, to babysit Talia for a moment so she can set up her example. Kevin takes Talia, and she appears content in his lap. All of the Sharks smile at the unexpected display from Kevin as a father. Elizabeth and Jeremiah take away the brightly-colored foam play mat and underneath is a more natural-colored foam play mat. Elizabeth goes to retrieve Talia, and Kevin jokes that “she knows cash-flow when she sees it.”

Little Nomad is a beautifully-illustrated printed play mat. It looks like an heirloom rug, which you might spend thousands of dollars on. But nope, it’s a practical, wipe-clean foam play mat. They’re great for crawling, tummy time, learning to sit up, and they’re easy to clean. They also have some customers who have said that the mats are great for other uses throughout their home, including under their standing desk, a soft flooring in their kitchen, or even as an exercise mat. With the help of the Sharks, Elizabeth can drive the circus out of town and bring some serenity into the homes of stylish parents everywhere.

With that said, Elizabeth dismisses Talia for nap time. Kevin says that it’s a shame she has to leave so early since he wanted to teach her about money. Elizabeth passes out swatches to each of the Sharks so they can feel the quality close-up. Currently, Elizabeth has one pattern in two colors for Little Nomad. Kevin asks about the plan for distribution, but Mark and Lori want to hear about sales. Little Nomad has been in business for three and a half months, and she has already pre-sold $114,000 worth of playing mats.

Mark asks if she has shipped anything, and Elizabeth explains that the product will ship in November – it’s currently being manufactured. She marketed by Photoshopping a picture, along with the lead designer of the mats, which was shared on Facebook and went viral in mom groups. They were redirected to a landing page where she collected their email addresses, and she collected more than 4,500 emails. Moms are going nuts with the product. Kevin asks where she wants to take the company and product in the future, and Elizabeth only says that she wants to align with the right retail stores. Bye Bye Baby, Nordstrom, Giggle, and more. Lori asks about the sale of each set, and Elizabeth explains that she sells the units in a package of six. Each foam play mat is two feet by two feet, so it’s a seamless connection of up to 24 total square feet.

Daymond and Robert ask about the profitability of each sale; each unit costs $16.39 to make, and when they arrive, the plan is to sell them for $139. Robert points out that she is the high-end of the product, but Elizabeth counters by explaining that there is a range of about $35 to $149. They aren’t the highest price. Mark says that there is nothing wrong with that, but with that kind of margin, why not continue to sell them all online? As someone who just had a baby, Elizabeth knows that the registry is key. 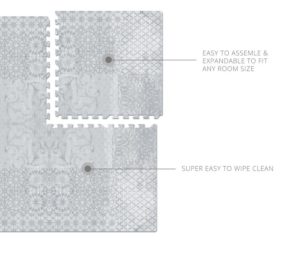 Kevin is impressed and says that when she came in, she had her competitor’s play mat on the floor. The basic premise of the business is that the competitor’s product is ugly if you don’t like bright colors. But it’s also half the price of her product. All the Sharks launch into different positions, both defending and attacking the statement, but Elizabeth continues. That foam play mat was the best quality product she could find, but Little Nomad’s foam is safer for children. In fact, the foam has been safety tested for zero months plus (meaning, they’re safe for all children). They are non-toxic, but Mark points out that’s why not people are buying it. People are buying it for the look.

Kevin then asks if you’re buying it for the look, why don’t the competitors make a more bland version? How many families, other than the upper east side of New York, want to spend $150 on 24 square feet of foam play mat? Elizabeth rebuttals that so far, a thousand moms throughout the United States have been interested. Kevin then says that she doesn’t want to make only hundreds of dollars, she wants to make millions of dollars. So she has to appeal to a bigger demographic.

Daymond says that he thinks the price point is a huge number for somebody who has to buy diapers, food, and everything else. Even when he had a play mat, his mother found an old refrigerator box, cut it open, and Daymond played on it for ten years. When he was 18, he went outside and broke dance on it. Elizabeth continues on – yes, the play mat is $139, but it’s not something that you want to immediately get rid of. Daymond refuses to believe that 95% of the country can afford that price, and he is the first Shark out of the deal.

Robert says that Elizabeth has done a great job to get to this point, but she didn’t talk anything about doubling down on what’s working – the online segment. Elizabeth intended to go retail, and Kevin says that such a giant piece of inventory will not find a space in retail. It simply takes up too much space. However, Lori says that Kevin and Robert are being ridiculous. Kevin continues on with a famous Greek mythological tale. There was once a great captain, but he and his sailors heard of the sirens of the sea. The captain asked his men to tie him to the mast and blindfold him so he wouldn’t guide his ship into the rocks. It was retailers on the rocks, Kevin concludes. He’s trying to get Elizabeth to listen and shy away from retail deals. 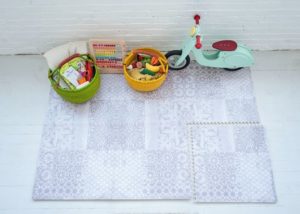 Elizabeth is sure that at Bye-Bye Baby and Nordstrom, the more stylish moms have set up registries. So, that’s her goal – to get into the places where baby shower registries exist. Mark speaks up, saying there is a logical progression. He sees Elizabeth as a driven entrepreneur, but that’s the trade-off, there are entrepreneurs that are better as solo entrepreneurs. This is her baby and her vision, and he doesn’t think that she is ready for a partner at this point. Mark is the next Shark out of the deal, leaving Elizabeth with three interested Sharks.

Kevin says that ultimately, Little Nomad is a mat made of foam. An expensive mat made of foam. He just thinks that she will have a very hard time making money, so Kevin is the third Shark out of the deal. Robert says that Elizabeth is very, very early. There is way more she doesn’t know compared to what she does know today, and she hasn’t shipped a single unit yet. They don’t know what the consumer thinks yet, so Robert is the fourth Shark out of the deal.

Lori is the solo Shark left in the tank, and Elizabeth starts by saying that she respects and looks up to Lori. She wants so desperately to make a deal with Lori. Lori starts by saying that what she has done is beautiful, but the sad thing is that you can’t really protect it. However, she is first, and the mat is very, very pretty. On the flipside, she is not sure how many people would buy the mats at their current price point. It’s so hard for Lori to give an answer since she loves Elizabeth and thinks it’s a smart product. However, she has to go with her gut for the question of ‘is this the right investment?’

With that said, Lori is sad to say that it’s in her gut to not go with the purchase. Elizabeth does not find a deal in the Shark Tank, and the sorrow on her face is too visible as she spins on her heel and exits the tank.

They might not have been able to score a deal on the show, but it looks like they’ve still managed to make things work.

As of 2023, the company is still in business. The Little Nomad, however, has since been rebranded to ‘House of Noa’. They’ve also expanded their products to include picnic mats, kitchen mats, highchair mats, yoga mats, and washable rugs so they no longer specialize in just one item.

Aside from their official website, which now offers free shipping on US orders above $89, you can also find some of their mats on Amazon. Reviews appear to be mixed (their baby foam play mat has an average rating of 3.4 stars), however. Some people praise them for their durability while others claim that the material peels off quickly. What’s interesting, though, is that their products on Amazon are still under their old name ‘Little Nomad’; they haven’t seemed to have changed it despite the rebranding, which happened a few years back.

As far as their social media presence goes, they have a considerable following on Instagram (nearly 100K followers), to which they post regularly. Their official Facebook page is also active with over 62,000 likes. Having said that, the latter doesn’t seem to receive that much engagement.