ManScaped After Shark Tank Update 2023 – Where Are They Now

Joshua King worked as a director of business development for a variety of different companies before appearing on Shark Tank. King’s first position after graduating college was as a telecom territory sales representative, and he later joined the marketing team at a tech s art-up. While working in these positions, King learned about the inner workings of businesses and gained significant experience in sales and marketing. This experience would prove invaluable when he decided to launch his own company, ManScaped. 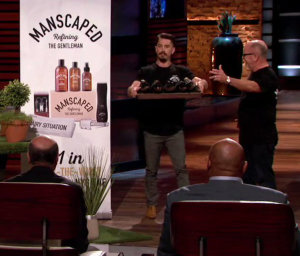 Steve King and his son walked out onto the stage and into the Shark Tank. He introduced himself and then his son Josh. He explained that they were from San Diego and their business, Manscaped. Their investment ask was $500,000 in exchange for 7% of the company. As always, with a high valuation, it just got the attention of the Sharks.

Steve King launched into an explanation of the company, saying there is more to mail grooming than meets the eye. You didn’t have to worry about beard oils,  hair creams, or anything above the waist. Steve said that what was below the neck or belts of the man would no longer be disregarded. The nether regions have been ignored for far too long.

Joshua continued where his father left off, introducing the Lawnmower 2.0, a trimmer “powerful enough to cut through any unruly shrubbery with a bang.” Josh went up to a small shrub they had on stage and demonstrated the tool. This got a hearty laugh from the Sharks. Steve told them the “tree” stands taller when trimming the hedges.

Josh let them know that although trimming the hedges was necessary, the first rule of manscaping is “Wash Thy Bits.” He gestured towards the kit set up on the stage and told the Sharks that there was no better way to get the parts clean than their moisturizing hygiene bundle, specially formulated to be Ph balanced. Their solutions help to hydrate and keep the skin down there looking young. 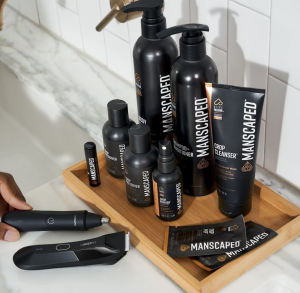 Josh implied they weregood for sensitive skin while also being tough on chaffing and smell. He said that it would be delicate on a man’s delicates. The Sharks, especially Robert and Mark Cuban, gleefully suggested that Charles Barkley would need the products. Mark Cuban stopped the presentation to ask the all-important question – if Charles Barkley manscaped. He said it was necessary information for the viewing public and all of America. Charles claimed he didn’t need to trim his hedges and looked utterly baffled by the question.

Josh and Steve King began handing out the Manscaped kits, saying they were “The perfect packages for their perfect packages.” Robert asked for a clarification on the product usage, cheekily pointing at the general area of his crotch. Josh told him the products were designed explicitly for below-the-waist grooming and hygiene.

Lori was delighted by the farm-themed names of a few of the products. For example, the title of the included manual razor was The Plow. Josh let them know that the kit included all the tools one would need to get started “from a manscaping position.”

Lori asked the two entrepreneurs how they got involved in the business. Josh launched into a story about how he and his buddies were sitting around telling stories about how their “downstairs” grooming efforts had failed, before dates and in general.  He decided he wanted to dedicate his time to providing the tools and knowledge for men to succeed in this area.

Josh claimed that every man is attempting to care for himself in this way but doesn’t know what he is doing. Robert asked for the percentage of men who add this extra routine to their hygiene pr tices.  Steve explained that in 2008 when the “metrosexual” movement started, only 6 percent of men went the extra mile to manscape. In 2018 when they filmed the episode, it was up to 73%. This impressed the Sharks or at least made them skeptical. 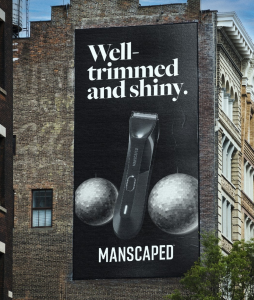 Charles Barkley wanted to know what Josh’s background was. Josh explained that he worked in the digital marketing and start-up fields after graduating from college in 2010. This gave him the SEO and social media experience to take a business to the next level.

After having the conversation with his friends, Josh realized that money was to be made in the men’s hygiene realm. He spoke with his dad, Steve King, who agreed on the potential. Steve used his connections with engineers and chemists to create the father-son team’s first eight ManScaped products.

Josh told the Sharks that his father was his idol, and that’s why Steve was the first person he thought to go to with his million-dollar idea. Josh admitted that he wouldn’t be where he was without his father. The other Sharks looked charmed, but Mr. Wonderful wanted to return to business.

Kevin questioned their seven million dollar valuation, making a pubic hair joke as he did so. Josh explained that in 2017, ManScaped did $1.5 million in sales. Steve went on to say that things weren’t always so easy. They spent four months at the beginning of 2017 attempting to figure out the right way to appeal to their customer base.

The duo eventually landed on humor – using the stories that Josh’s friends told to make viral videos on YouTube. The products fit into the theme, with funny names such as The Lawnmower as the primary razor and the Weed Wacker, which is a trimmer for your nose hair. They were having such a difficult time in those four months that they almost considered giving up on the business altogether.

Once they landed on their message of humor, they had a much easier time of it. They sold out of their 3,000 units within 13 days. Charles wanted to know how much each bag cost. Josh let them know that it was $51 for all the products in the bag. Lori said that was an odd price point, but was reassured when Josh explained that it was the price for all the products individually. He went on to say that they tried to get people to purchase a kit first, and then sold each thing individually.

Josh explained that each bag cost $12 to make. Their margins were a little low to pay for their customer acquisition cost. In 2017, when they made $1.5 million, they actually lost over $130,000 of that. Steve stuttered a little when he explained how much their customer acquisition cost was. He said it was $16 to acquire a new customer, which was more than the material cost of each bag. Their margin was only $7 per kit.

Steve assured at the sharks that they were putting all of the money that they earned, which was $2.1 million to date, right back into the business. They need to spend that money on inventory and advertising. They were currently spending $150,000 per month on what Steve called paid media, or marketing.

Lori wanted to know if women bought the product. It turns out that women were a part of their target audience as they would buy it as gifts for men. Mark Cuban said that the product was really for women, or the men’s partners, if you thought about it. A light went on inside Lori’s head. Josh explained that their sales went up noticeably in November and December when people were buying gifts for the holidays.

Kevin got back to business, saying that if he invested $500,000 he would want to get $2 million back. He insisted that he didn’t think that they had a solid business model, and he didn’t think he would be able to get his money back. He went out. 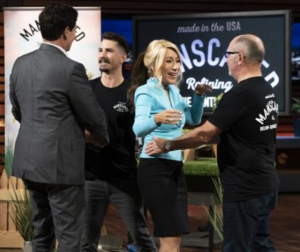 Charles also went out, stating that he had never Manscape in his life and he was not about to start now. Robert went on to make an offer. He said that he would give them the $500,000 that they were asking for in exchange for 35% equity in their company. He went on to explain that he started manscaping after he went on Dancing With the Stars, and they gave him a full wax.

The father-son duo was hesitant, and for good reason. That severely cut down their valuation. Lori said that initially she was not on board, but she loved their salesmanship and the product. She wanted Mark Cuban to put the money up, and she could sell on QVC. Robert saw that they had a much better offer, and he went out.

Steve requested that Mark and Lori go down to 20%, which was of course denied. Mark let him know that the value that both Sharks could add was too much to cut down on their equity ask. After a tense moment of decision making, Josh and Steve decided to take the Sharks up on the offer.

ManScaped Now in 2023 – The After Shark Tank Update 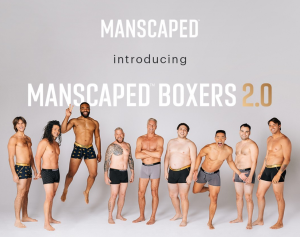 In 2018, they got a deal on Shark Tank with Lori Greiner and Mark Cuban. Since then, the business has been successful. Manscaped has arranged a strategic partnership with Slyde, a business that Mark Cuban invested in in 2016. Lori seems to still be working on getting the business onto QVC. According to his Linkedin, Josh King has stepped away from the company to focus on other startups. His father, Steve King, seems to be still involved.