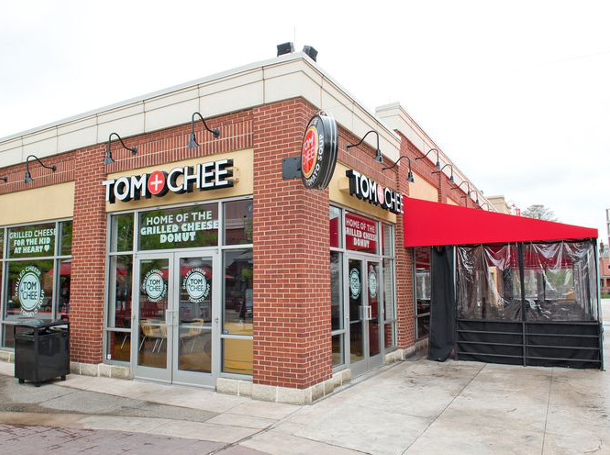 Tom and Chee before Shark Tank

Tom and Chee was founded by Drew Quackenbush and Corey Ward in the winter of 2009 after Corey had an idea to open up a grilled cheese and tomato soup shop for the kid at heart. Drew and Corey didn’t have enough money to open a restaurant, a food truck, or even a food cart at the time. They did, however, have enough money for a tent and griddle so they set up outside an ice skating ring in Cincinnati, Ohio despite being warned by the local city that no one has ever profited from this area. Although they left the first day with only $35, they were assured to make their dreams come true so they continued their idea and returned the following summer as well. 364 days after setting up their tent, they had earned enough money to open a store.

After several months and a lot of work from Drew and Corey, Tom and Chee officially opened their first store in Cincinnati and the response was incredible. People would wait over an hour and a half just to come up to order because of the unique food options offered by Tom and Chee such as the grilled cheese donut. Seeing this growing restaurant and their creativity, a local mall proposed Drew and Corey a second location with an offer they could not refuse. Tom and Chee soon got tons of calls from the local media who wanted to interview them including Adam Richmond from Man vs Food. Exposure from Adam’s show and many other outlets led to a heavy increase in sales for their two stores. Of the many customers who waited in these long lines, one was the Tinsley family from Louisville, Kentucky who loved their idea and wanted to own a franchise. With some help, Drew, Corey, and the Tinsley family were able to open their first franchise in Kentucky. Drew and Corey wanted to expand their franchising idea and knew they needed an investment to do it. After numerous emails to the producers, they got a response from Shark Tank informing them that they would be on the show!

Drew and Corey entered the Shark Tank in season four seeking $600,000 for a 10% stake in the company. They began the pitch by how they got their company started and the popularity of their unique food items such as the grilled cheese donut. Although hesitant at first, each of the sharks took a bite into this famous donut and Robert admitted that it tasted pretty good. Mark wanted to know more about their food so they described their basic sandwiches such as barbeque bacon and how it was inexpensive for the Cincinnati area. Kevin was very picky about their food and prices’, immediately asking “is crap the brand?” Drew was quick to defend their restaurant and explain their mission of offering people affordable food in this economy. Barbara asked for their sales and Drew stated they grossed $1,500,000. This shocked all of the sharks at it wasn’t common to see businesses with over $1,000,000 in sales during season four. Corey than explained the franchise costs and how much money came back to them from the franchisees.

Barbara was immediately impressed from their sales and customer attraction stories so she offered them $300,000 for 15% if another shark would come in with her since they needed the full $600,000. Daymond didn’t feel the concept was right for him as he believes in healthy products so he went out. Kevin was on the fence as he was also in love with the numbers, but was hesitant on how such an idea was so successful. He decided to throw $100,000 in for 5% to be a part of the deal and Robert also added $100,000 for 5%. They still needed $100,000 to reach $600,000 and Mark was the only one left. He immediately stated he would not do $100,000 as it would not be worth the time, but that he would put up $300,000 for 15% and go in with Barbara for a total of $600,000 for 30%. He also wanted franchise rights to the state of Texas and Barbara immediately added she wanted rights to the state of New York. Kevin and Robert were not willing to compete with those offers so they both went out. Drew and Corey, wanting to partner with Barbara and Mark even before the pitch, took their offer. Both left the tank very excited having gotten the sharks they wanted.

Unfortunately, the deal fell through on Mark’s side. Rather than franchising, he felt that it would be better for the company if all of the stores were corporate owned. Trew and Corey, however, felt that franchising would be a better option. For one thing, they did not have the funds to do it Mark’s way. Noticing their reaction, the shark eventually dropped out of the deal.

Barbara, on the other hand, was still very interested in working with the pair. In the end, she made them a new deal, though the specifics have not been disclosed.

At the end of the day, it was still a success. Not only did they get to work with Barbara, but being on the show also given them exposure, which helped increase their sales.

Within two years, they had received more than 25,000 franchise requests. And with Barbra’s help, they were able to find some good locations for their new franchisees. By 2018, they had opened 25 stores across the United States with more than 150 contracts in progress. They also changed their menus so that instead of chalkboards, they’re written in the stores’ interiors in bright colors so that they’re more eye-catching.

However, they soon ran into problems. It was revealed in a subsequent update that they expanded too fast and that many of the franchises didn’t have adequate support. To make matters worse, many of them didn’t have any food service experience. Because of this, the company’s assets were ultimately seized by its bank.

The following year, GSR Brands, the parent company of Cincinnati’s Gold Star Chilli, acquired their assets from the bank for an undisclosed amount. As far as we can tell, however, Trew and Corey were still involved with the company. The former worked on the menus while the latter focused his attention on marketing.

While GSR closed several stores between 2018 and 2019, they eventually opened more at the beginning of 2020. They also underwent a rebranding process where instead of regular grilled cheeses, they offer “melts”, which allows for more customizations. As part of the process, they also switched to using ovens, which helped cut the prep time down from six minutes to 90 seconds.

Due to the COVID-19 pandemic, however, their expansion plans were put on hold. In fact, it had caused many of their stores to close down. By April 2021, they only had seven stores remaining, one of which is the new rebranded Tom & Chee store.

As of 2023, the company opened several new franchised stores in Oklahoma City, Cincinnati, and Pittsburgh. And they’re not finished yet—they’re still offering franchises to interested parties and plan on expanding with a new business model.