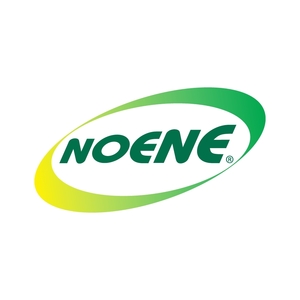 Brian Scott, from Atlanta, Georgia, is the founder of Noene USA. Brian has come to the Shark Tank to seek an investment of $100,000 in exchange for 10% equity in his company. Noene are high-tech insoles that absorb and disperse both high and low frequency energy that enters your body whenever you jump, run, or even walk. Currently, to alleviate the problem, your average consumer will buy a flimsy insole since they think it will fix their shoe problem, but ultimately, it does not. Brian demonstrates – if you bounce a ball on the insole, the ball will bounce back up, showing that the insoles will reflect the energy back up into our bodies, which is called the “rebound effect.”

This rebound effect can cause chronic pain and injury, meaning that the insoles frequently do not work. Noene, on the other hand, is made with a synthetic rubber that is able to absorb and internally disperse the shock of a bouncing ball, leaving very little to no rebound effect. So, Brian takes a piece of glass, lays the Noene on top, and drops a weighted bocce ball on the glass shard. The bocce ball lands with a dull thud, and all five of the Sharks are blown away as the ball continues to land with a dull thud. The glass comes out completely undamaged, and to demonstrate, Brian drops the same bocce ball on a regular insole. The glass square shatters, unsurprisingly.

Brian has one more demonstration for his product, which involves a red and black rubber ball – the black rubber ball is made of Noene, and the red rubber ball is made from your typical insole rubber. The Noene ball does not bounce back up, while the red rubber ball bounces and continues to move. Brian then passes out a sample of Noene in comparison with your typical insoles, and he is confident that Noene is the only insole that is thinner than a dime and can protect a piece of glass.

Brian explains that he just passed out the under insoles, which requires the user to take out their original insole, put the Noene insole in, then put the original insole back in – the Noene is so light that it does not change the fit of your shoe. In addition to the sport insole, Noene is in the final stages of finishing a woman’s heel prototype for insoles, as well. Robert is the first to ask how Brian came up with the project, asking if he is a doctor or an engineer. However, Brian is none of these things and was actually an NFL player for 10 years. Brian started in Atlanta in the NFL draft, was picked in the second round and played there for 3 years before going to New Orleans and eventually Buffalo. 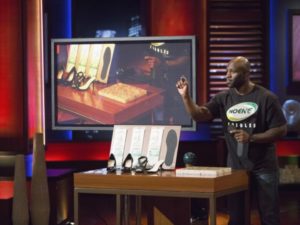 Noene is a company focusing primarily on insoles, Brian explains as he returns to business, as they are a product that sells heavily over in Europe. The second phase is the different sport applications of Noene, including baseball bat grips, boxing gloves, tennis racket grips, and many more ideas. Mark asks for Brian to take things back and explain how Brian will eventually get to this plan – Brian explains that Noene is a company in Europe, where they sell the similar product. On average, Noene Europe brings in about $1.25 million on average in insoles alone. Robert asks if Noene USA signed a licensing agreement with Noene Europe, and Brian confirms that he has signed an exclusive agreement to be the sole licensor of Noene insoles for both Canada and the United States.

Daymond asks how much Brian pays for a pair of units, which comes out to $6 and each pair vendors for $29.99. This is not terribly expensive for a pair of insoles and means that the model is renewable, but Daymond asks what the sales were for the past year. Brian explains that they pride the product on being thinner than a dime, but to date, have not sold a single dime, which causes uproarious laughter from Mark and Robert. Mark explains that in basketball, the guys always say that they are open for a pass, and the coach would reply that there is a reason that the guy is open for a pass.

However, Brian takes a step back and explains why they have sold no Noene units – there have been no units sold in the United States, and Brian was only introduced to the company in January. He is a part equity owner which is split four ways, and all four people have committed a million dollars to the company. Mark finds this outrageous, asking why each investor would commit the money, but Brian explains that each investor has $250,000 to put in. Daymond and Robert do not find this logical, as it does not make sense that the company would come in and seek equity. Kevin, however, feels that he can tell the company with certainty that Brian and Noene USA will never get a million dollar evaluation since there are no sales to be found, even if the product has as much merit as Brian thinks that it has. 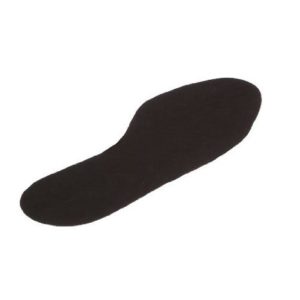 The problem for Brian lies that Brian needs to negotiate the licensing deal with Noene Europe and get a piece of it – nobody is going to want to start a distribution system for one insole. However, Brian feels that there is far more than just an insole, and they would take no revenue from the distribution system. With the capital from the Shark Tank, they just want to get the company going, but Robert steps in and admits that the story does not add up for him. As an investor, he does not see the application of the product, and it would not make sense to invest his money. Robert is the first Shark out of the deal.

Kevin cannot believe that Brian is paying $6 per unit for an insole, which is a huge amount of work to bring the margins up and the price per unit down. However, Brian was once told by a wise coach that “you cannot climb to the top of the mountain if the sides are smooth,” but Kevin admits he would want half of the company in order to meet Brian’s current evaluation. For the amount of work, there is too much for Kevin to do, so Kevin is also out of the deal.

Lori finds the idea interesting and that she will definitely buy the product and be a tester, but as an investor, she is not interested. Lori is out of the deal, leaving Mark and Daymond as the remaining Shark. Mark drops a bomb in the room and says that he will make Brian an offer, but the offer will have a lot of contingencies. If the science behind Noene is legit, then Mark is interested, so he will have his team due their due diligence. Mark offers $100,000 in exchange for 20%, but Brian must also convince Daymond to come in on the deal as well. If Noene truly does work, then making it as a part of a shoe would be a unique way to add value.

Daymond agrees; in his history, he purchased a brand and the brand spent three years working on a running shoe since guys like Robert would purchase the wrong running shoe and hurt himself. Daymond goes in with Mark, offering an investment of $200,000 in exchange for 40% of the company. Daymond clarifies, as Brian is getting an investment deal with two Sharks, one of which has an immediate need for the Noene product, and the other of which has worked with companies like Skecher’s. Mark is certain that the shoe companies he has worked with will bring in Noene products.

Unfortunately, the deal with Mark and Daymond never went through. Despite that, the company seemed to do well. Many people became aware of their products after the segment aired and sales went up. Thanks to that, they were able to crank up production and for the next few years, business flourished.

Fast forward to 2020 and it was announced that Noene USA had been acquired by Foot Solutions, Inc.- an international retailer that specializes in foot wellness- for an undisclosed amount. Since then, their insoles have been made available through the FootSolutions network of speciality retail stores across the United States.

As of 2023, the company is still up and running. They currently offer three types of insoles—the Sport Invisible SOS1, the Sport Universal NO2, and the Red Sole.

NOENE – Sport Invisible SOS1: A cut-to-fit insole that’s designed to help reduce the amount of stress on your joints by absorbing shockwaves generated by walking and running. Not only is it lightweight, but it’s also incredibly thin (1mm), which makes it easy to fit into your current footwear. And since they’re undersoles, they won’t change the fit of your shoe. Available for $59.99 at their official website.

NOENE – Sport Universal NO2: The company’s original shock-absorbing insoles that were featured on Shark Tank. Thin and lightweight, they’re perfect for walking, running, hiking, and standing, and can be used with virtually every type of shoe from sneakers to work boots. Available for $54.99 at their official website.

NOENE – Red Sole: Featured on Shark Tank, these insoles are designed for those with flat feet and are best suited for those who work or stand on their feet all day. Not only that, but they’re also a great option for seniors who want to maintain an active lifestyle as they provide high-tech joint protection. Not to mention that they’re washable and reusable. Available for $59.99 at their official website.

As for what Bryan Scott is up to, he’s currently the owner of a fitness studio called TITLE Boxing Club in Alpharetta, Georgia. Not only does he run the business, but he also teaches workout classes as one of the trainers at the studio. And judging from their 4.9-star rating on Google, people seem happy about the classes, which by the way, you can sign up for on their website here. Currently, they offer four types of memberships: Unlimited Club, Unlimited Title, 8x/month, and 4x/month. You can read more about them here.