Glasses are more than just a prescribed device that some people need in order to view life more clearly. For individuals who wear glasses all the time, their glasses become a part of their personality. While some individuals may appreciate a basic lens, others like a little added pizzazz; however, no one wants to devote an entire paycheck to purchasing a pair that caters to their personality. Fortunately, the entrepreneurs at Pair Eyewear understand that and have created a solution that benefits everyone. 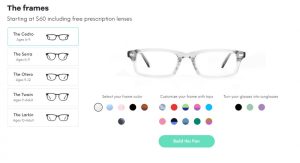 Pair Eyewear was founded by, Stanford graduates, Sophia Edelstein, and Nathan Kondamuri in 2017. Of the two entrepreneurs, Nathan Kondamuri has had to wear glasses for the majority of his life; however, he’s felt as if his frames were boring and didn’t match him personality-wise. Not to mention the cost of one pair can be irrational. After conducting extensive research and various interviews with, both, children and adults, Sophia and Nathan discovered that many individuals had similar feelings on the matter. Thus bringing Pair Eyewear into existence with a determination to make wearing glasses fun and articulate.
Pair Eyewear glasses are designed with magnets within the frames and the toppers. This makes swapping toppers out for other colors and designs a quick, on-the-go task for all. Even shaded toppers are available for those who like sunglasses! Prices for frames start at $60, while the toppers are only an additional $25 and $30 each. When ordering glasses from Pair Eyewear, you’ll be sent up to five cardboard samples of the style you choose to ensure you like them before purchasing. This also makes returns easier as you won’t have to re-package any glasses! 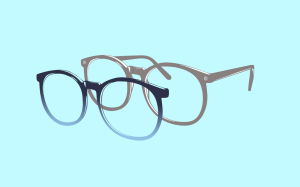 Additionally, for each pair of Pair Eyewear glasses bought, the company gifts a brand new pair to a nonprofit; The Eyelliance. This organization supplies glasses to children of families who cannot afford them. As of late 2017, Pair Eyewear had raised about $1.15 million in investments. Now, while Pair Eyewear was already a great success, Warby Parker made note of their accomplishments and began selling glasses for children as well. At this time, it’s safe to say that Pair Eyewear has developed some competition in the eyewear industry. Can they corner the market before Warby Parker? Possibly, but it may take the help of a few intelligent offerers – the Sharks. Just one offer can give their business the boost it needs.

March 6, 2020, Sophia Edelstein and Nathan Kondamuri introduced Pair Eyewear to the sharks on Season 11 Episode 14 of Shark Tank. In search of an offer of $400,000 for a 10% investment in the company, they gave out samples of their product while presenting it to the sharks. From that moment, the sharks already appeared to be impressed by the creation; however, the competition the two were up against brought concern to the sharks. With that said, it was time to hear out the sharks offers.
First up were Lori Greiner and Katrina Lake. Overall, Greiner and Lake were concerned about further investors, as well as the competition with Wabry Parker; nonetheless, they made the offer of $400,000 for the 10% investment. In addition, they both wanted $1.50 per pair of glasses up until the investment was covered. The entrepreneurs believed this was fair and they took the offer prior to hearing other possible offers. 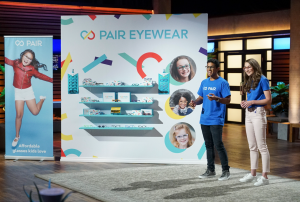 Robert Herjavec, Kevin O’Leary, and Mark Cuban all back out, explaining that they didn’t believe Pair Eyewear was a solid company up against the Warby Parker competition. While the opinions from those sharks may have come off as disheartening, Greiner and Lake were still all in. They offer their initial deal but with an increase to $2.00 per pair while the investment is being covered. While this deal seems fair, Edelstein and Kondamuri offer an additional 2% share in place of the $2.00.
As far as the future of Pair Eyewear goes, Greiner and Lake can provide the necessary support in getting the company’s profits up. They stick with their offer of $400,000 for 10%, with the $2.00 royalty. Now, the entrepreneurs understand the benefits of teaming up with the sharks, but they disagree with the royalty and end up offering a $1.00 royalty instead. After much discussion, Greiner and Lake reverted back to their original offer of $400,000 for a 10% investment, along with the additional $1.50 royalty. At this time, knowing this was the sharks final offer, the entrepreneurs accepted the offer from Greiner and Lake.

Pair Eyewear Now in 2023 – The After Shark Tank Update

Following their success on Shark Tank, as of 2023, Pair Eyewear remains in business and has grown immensely. In fact, the company now has brand deals with large companies such as Marvel, Sesame Street, Harry Potter, DC, ad many more. With these current brand deals, Edelstein and Kondamuri predict that the company’s sales will continue to increase rapidly – this gives them additional funds to put right back into their product! For instance, they’re continuously working on expanding their adult-sized frames, along with adding more options on toppers each month. 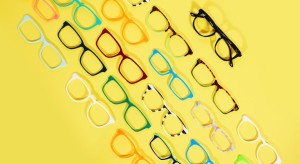 As their monthly growth accelerates further, the company continues to strive to bring back the confidence of glasses wearers, while keeping their prices affordable. Pair Eyewear gains crowds of new customers monthly (30% each month), resulting in Edelstein calling their company “recession-proof”. Not to mention they started gaining 10% more sales last year just through the platform, TikTok.
Continuing on with their undeniable successes, Pair Eyewear now has raised over $12 million to support millions of kids in need of glasses. This donation has not only given these children a means of self-expression, but it’s given them the message that change is possible. In addition, their partnership with The Eyelliance still stands in 2023 – if you purchase a pair of their glasses, they’ll send a pair to a child in need. These incredible glasses can be purchased off their website, paireyewear.com – from basic colors, neon colors, and even cool designs, Pair Eyewear has whatever individuals need to express themselves daily. They also sell a variety of accessories, such as colorful glasses cases, ear hooks, cleansing kits, wall hangers, and even e-gift cards.
Share
Facebook
Twitter
Pinterest
WhatsApp
Previous articleSilkRoll 2023 Update – What Happened After Shark Tank
Next articleCheek’d Update After Shark Tank – How’s The Dating Service Doing Now In 2023?