Pooch Selfie After Shark Tank Update 2022 – Where Are They Now 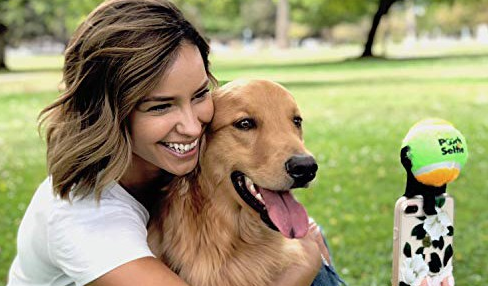 Pooch Selfie was launched in 2014. A longtime pet lover, Jason Hernandez came up with the idea after seeing how difficult it was for his wife to get their dog Logan to look at the camera when taking pictures. Wanting to help, he jumped in with a tennis ball, which immediately caught the pup’s attention. While it worked and they were able to get an Instagram-worthy selfie with Logan, it got him thinking, ‘what if I was not there to help?’.

So he got to work. The end product? A smartphone accessory that allows dog owners to take better selfies with their pets. Named the ‘Pooch Selfie’, it consisted of a clip that you can use to attach a squeaky ball to your phone. That way, you can entice your dog to look at the camera when you’re trying to take a selfie.

Having designed the product, Jason officially launched the company under its brand name in 2014. And in 2015, he submitted his project to Kickstarter in hopes of bringing it to life. With the help of fellow pet owners, he was able to raise nearly $40,000, which was nearly seven times his original goal. Thus, the Pooch Selfie came to be. Not only was he able to produce the product, but he was able to make a professional commercial for it as well.

After three years of growing the company, he decided to try his luck with ABC’s Shark Tank, which if successful, would allow him to work with some of the most successful businessmen in the country. Putting together a pitch, Jason attended an open casting call and successfully landed a spot on the tenth season of the show. The episode later aired on March 17, 2019.

The last entrepreneur to be featured in the episode, Jason and his wife proudly stride into the tank with their dog Logan. Standing in front of the Sharks, he greets them and tells them that he’s seeking $100,000 for 20% equity in his company, Pooch Selfie.

As the Sharks listen on, Jason jumps right into his pitch, telling them that he’s a big pet lover and that he enjoys taking pictures with his pup—but that he would need to take ten pictures, just to have one ‘good’ one as his dog would always turn his head away from the camera. And as he says all this, various selfies that he took with Logan are displayed on the screen.

Realizing that he wasn’t the only pet owner with this problem, he sought to create a solution—the Pooch Selfie. With this, the camera zooms in toward the product as Jason talks more about the product. He tells the sharks that his invention uses a dog’s natural draw and focus on a tennis ball to hold their attention long enough to take the perfect selfie.

Knowing that they would probably want to see it in action, Jason tells the Sharks that his wife will be demonstrating how it works with their pup Logan. As the camera pans toward them, Jason explains that their universal phone clip goes on top of the device and that that allows you to attach the Pooch Selfie ball to the phone. “And voila, you’ve instantly become a master dog photographer!”

Some of the sharks seem intrigued with the idea as Jason shows them some of their happy customers and the selfies that they’ve managed to take with the product. He also makes a point that the Pooch Selfie, despite its name, is not only great for selfies, but can be used for portraits as well. With that, Jason opens the floor with the question, “who’s ready to help me change the way we take pictures and selfies with our fur kids and show the world that you can teach an old dog new tricks?”

Lori smiles and asks whether or not they will be given samples to which Jason says yes. He quickly heads over to the Sharks and gives each of them a Pooch Selfie while his wife and Logan exit the stage to ‘play some ball.’

The Sharks examine the product that’s in their hands for a few seconds before Kevin asks how many of the Pooch Selfie they’ve sold so far. In response, Jason tells him that they’ve made $380,000 so far in revenue. This seems to impress the Sharks; they go on to inquire about the product’s price, to which Jason tells them that it’s being sold for $9.99. Kevin follows up by asking how much it costs to make the product and Jason answers, “$1.30”. Impressed, the Sharks ask whether or not that price includes the cost of packaging and Jason says yes.

Lori reiterates the fact that they made $360,000 so far and asks whether or not Jason knows how many units they’ve sold already. Visibly nervous, Jason tells them he doesn’t know from the top of his head but is able to get the numbers if they wish.

Matt Higgins, the guest Shark for the episode, tells Jason to take a breath to gather his thoughts, which he does, and it seems to work. After taking a breath, he proudly tells them that they’ve sold 25,000 units so far. Lori asks whether he’s working alone on the product to which Jason says yes. Pointing to the table and display, he lets them know that everything they see in front of them was completely done by him.

Holding the product in his hand, Kevin states that “[anyone] can knock this off in two seconds.” Jason nods but lets them know that he does have a utility patent for the product in the United States. Kevin then asks how they’re selling their products and Jason answers by saying that 74% of their sales are from their online store, which is completely run by him.

Kevin asks whether or not he’s approached any pet stores about the product and Jason lets him know that he did and that their product is actually being sold at “his dream retailer”, Bed Bath and Beyond. He goes on to say that they rolled them out at many of their different stores but that because the product is different from regular dog toys in that they require a bit of “education”, sales haven’t been that great and as a result, Bed Bath And Beyond have had to mark the prices down.

Changing the topic, Matt asks Jason about his background. He lets them know that he studied mechanical engineering in school and that he used his knowledge to design the product, which was fine-tuned before being mass-produced. He tells the Sharks that he had gone to China himself to meet with the molder and to work with them to get the actual parts for the product.

Mark asks how much he’s invested into the company so far, to which Jason tells him $18,000 of his own money and that he doesn’t have any loans or debts. Asked whether or not he currently works on Pooch Selfie full time, Jason shakes his head, that while it’s “his dream job”, the earnings are not yet enough to support himself and his family. Because of that, he hasn’t quit his day job of being an electrical salesman.

Daymond asks what he would do with the $100,000 and Jason tells them that he’d actually like to redesign the product as its design is not compatible with many of the new smartphones available today. Not only that, but he’d also like to use it for their follow-up item, which uses the same concept, but instead of a tennis ball, holds a treat at the top to get a pup’s attention.

Matt goes on to ask whether or not he has any inventory left and Jason says yes, he still has 18,000 units of the original Pooch Selfie. Surprised, the Sharks ask why he’s not just selling them to fund the rest of his company rather than trying to get an investor.

Trying not to get emotional, Jason tells them that it’s been hard “watching people try to capitalize on the idea”. He goes on to say that he’s not only trying to sell the product but that he’s also trying to protect it and that “that’s the stuff that nobody sees.”

Daymond becomes visibly distraught and starts talking about his own dogs. He reveals that one of them had actually passed away recently and that he doesn’t have any good pictures of him. He proceeds to offer Jason $100,000 for 33.3% of the company.

Jason asks Daymond whether or not it’d be okay for him to check with the other Sharks for other potential offers but Mark warns him about the decision. Kevin subsequently lets him know that he’s out, as do Matt, Lori, and Mark.

With no other offers, Jason decides to accept Daymond’s offer.

Pooch Selfie Now in 2022 – The After Shark Tank Update

Following their appearance on Shark Tank, Pooch Selfie saw a boost in sales. However, it’s unknown whether or not the deal with Daymond was finalized in the end. With that said, the product is now everywhere. You can find it at Bed Bath and Beyond, Chewy, Amazon, The Grommet, and many other retailers. At one point, it was out of stock on Amazon, which led many to believe that the company had shut down but they’ve since restocked the item.

The company’s official website is still online as well as of 2022. In fact, you can also buy the product there. They offer single packs for $12.99 or double packs for $25.98. They even have a pink version of the accessory for sale! Given that, it’s probably fair to say that Jason was able to make some tweaks to the original Pooch Selfie in the end.

Having said that, it looks like he’s no longer with the company. According to his LinkedIn Profile, he stopped working there in January 2022. Seeing as how the product is still available for sale, however, it’s likely that he sold the company, though it’s unclear who he sold it to.

The company’s social media accounts, however, are still active. Just a couple of weeks ago, Jason made a post on Instagram about Logan’s passing. They also have an official Facebook page, though it hasn’t been updated since 2021.