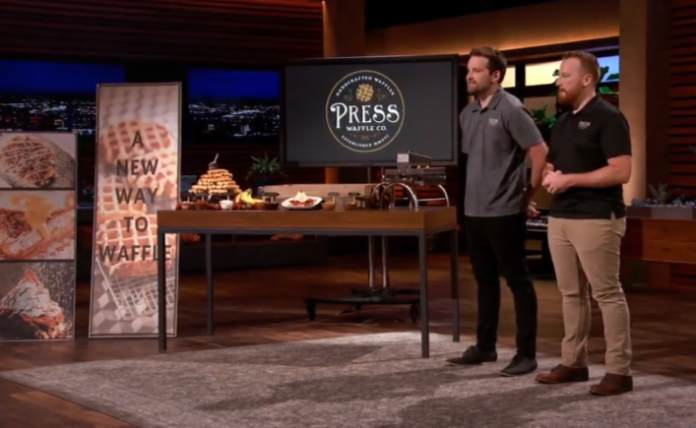 The Press Waffle Company is a company that was started by Bryan Lewis and Caleb Lewis to bring delicious European confectionaries to the people of America. Bryan Lewis got the idea when he was touring Europe with his wife. Bryan ordered a waffle at a cafe and couldn’t get enough of it. Unfortunately, when he came back to America, he couldn’t find such treats anywhere.

Bryan then started making the Belgian waffles as a hobby. He then started the business in his home area, Dallas, Texas. The Press Waffle Company had a single shop in a food hall in Texas. A food hall is a location larger than a mall where people can enjoy a variety of high-end meals. The food hall operates on the concept that people will go to specific destinations to enjoy quality meals.

Although they had opened a successful store, the Press Waffle Company still needed more capital to grow and knowledge on how to use this capital. This is the reason why they applied to be on Shark Tank. They were invited to be on the 17th episode of the 10th season. 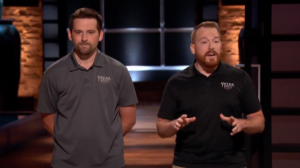 Bryan and Caleb Lewis went onto Shark Tank seeking $200,000 and were offering 8% of their company. They gave a brief description of the company and gave the sharks some of their Belgian waffles to taste.

The waffles were a big hit with the sharks who couldn’t get enough of them either even though Press Waffle did not give a calorie count for its meals.  As they ate, Bryan told them that a single waffle cost $8. Kevin asked them how much they made and was told they made over $5,000 per square foot which the sharks thought was very good. They are also in the first European-style food hall in Texas.

Kevin asked them their expected revenue and was told it was $900,000. Kevin then asked what percentage of their gross profit they pay to the food hall and was told that they paid 25.5%. However, even when they paid this amount, Press Waffle still made a 14% profit. In exchange for the profit, they did not pay for utilities or rent so even if they were to shut down for a month they wouldn’t be charged rent.

Kevin showed concern about the high royalty rate and asked if they could get the same deal in other places. He was told that there were other food halls in the state and Press Waffle had signed letters of intent. These food halls were willing to offer them their facilities for lower rates such as 20% and even 15% of the gross sales.

Bryan then told the sharks that it would cost about $115,000 to $150,000 to build the new locations which Barbara thought was quite cheap. Mark Cuban then said that he could help the business a great deal but 20% was too little for what they were asking. He then offered them $350,000 but for 20% of the company.

Barbara then gave them the choice of taking either $200,000 for 15% or $400,000 for 30% of the company. Kevin didn’t think that they should offer anyone such a large share of Press Waffle. He offered them $200,000 as a straight debt loan and for this, he would get 3% of the company. The loan would accrue interest at the rate of 7 to 11% annually depending on the store. 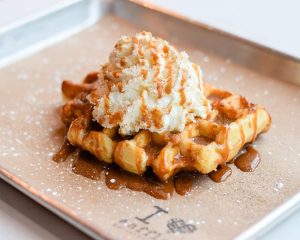 Lori thought it was a great offer.  Barbara disagreed. Robert then offered them $600,000 which is what they would need to open the 6 locations. However, he let them choose how much equity they would give him for it.

Bryan and Caleb declined Robert’s offer. They thought it was too high. They didn’t think they could give anyone more than 15% of the company but they would have to if they accepted the $600,000.  Robert then changed and offered$ 400,000 for 20% of Press Waffle. Caleb and Bryan thought it was a great offer but waited to hear if the other sharks would offer something.

Barbara thought that she gave a better offer because she had a lot of experience with food businesses. Robert didn’t think so. He thought he didn’t have as many answers as Barbara but they could figure those out together.

Caleb thought that they would be better off working with Barbara and their vision was in line with Kevin’s approach of them expanding to be as big as possible. They then asked Barbara if she could lower her offer and accept to give $300,000 for 15% of the company.  They said that they were bothered more by the percentage than the amount of money.

Barbara Then proposed $250,000 for 15% of the company.  The Lewises countered with $300,000 for 15%.  Barbara accepted the offer.  Bryan and Caleb were happy with the offer not believing that in 2 years they had gone from knowing nothing about the food industry to having a company valued at $2,000,000 and partnering with Barbara Corcoran. 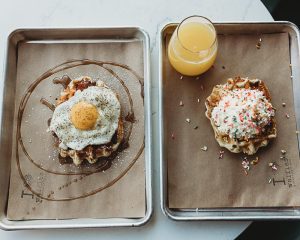 Just from being on Shark Tank, the Press Waffle Company enjoyed a ton of publicity. They received nearly 400 offers to open a franchise. They have already opened 7 stores with 4 more in development.  The Press Waffle Company now also offers restaurants the option of franchising with them. They will ask for 2-6% of revenue as royalty and the buyer must have a minimum of $100,000. They estimate that investing with them would cost approximately $200,000 to $400,000.

Customers can now make orders online. Covid-19 did slow their progress but it looks to be picking up the pace.  The company’s social media is also thriving. They have over 19,000 followers on Instagram and more than 9,000 followers on Facebook.

Bryan and Caleb attribute their success to the fact that their waffles are customizable and people can add a variety of things to them that they like. They also don’t just deliver quality food but it is delivered by a highly motivated staff that makes a visit to the waffle hall worthwhile. The company is based in America and continues to provide employment to a lot of Americans who provide the rest with a little taste of what the outside world has to offer.