Before becoming an entrepreneur and appearing on Shark Tank, Pete Badaway desperately sought a solution to a problem he and his wife shared. He, an Army Veteran Police Officer, and Bianca, a nurse, would always come home from their shifts and immediately take off their uniforms and shoes.

Neither one felt comfortable with the prospect of dragging their work’s germs into their home with them. Pete wanted to find a product he and his spouse could use to decontaminate their clothes throughout the day, and this did not exist. Their solution was to create GarmaGuard.

Of course, they did not want to use heavy chemicals and looked for healthy and all-natural solutions. The couple landed on citric acid, an effective killer of viruses and bacteria and aids in eliminating odors. The Badaways had GarmaGuard lab tested to confirm its effectiveness and attempted to prove that it was able to kill COVID. Would all this be enough to impress the Sharks and walk out with a deal? Let’s take a look. 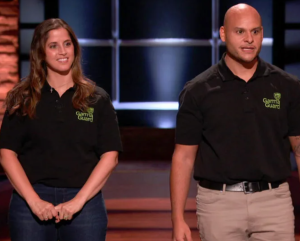 Pete Badaway and his wife Bianca entered the Shark Tank fully decked out in PPE, or personal protective equipment. They wore gloves that covered their arms, white sanitation coats, and booties. The couple removed their goggles as they introduced themselves to the Sharks. Bianca explained that they were looking for $100,000 in exchange for 10 % equity in their company, GarmaGuard.

Bianca introduced them to Joe, standing off the stage side, wearing a face mask. She narrated Joe’s day, stating that he gets up, gets himself ready, puts his mask on, and heads off to work. Pete was holding props – a little ball with velcro on it. He said that the second Joe left the house, he would be barraged with nasty little germs covered in dirt, bacteria, and other bad things. Joe continued his “walk to work,” pumping his arms enthusiastically as Pete threw the velcro balls at him. The balls stuck to Joe, representing germs.

The Sharks love it. Daymond got a good chuckle out of it. Pete continued with his narration of Joe grabbing a quick latte at a crowded cafe or someone sneezing near him at work.
Bianca pointed out that even if Pete was diligent about washing his hands throughout the day, his clothes still gathered germs.

She explained that the dirt Joe had been collecting all day would still be on his clothes. Pete said that not everyone could wear full PPE daily to protect themselves. Bianca said there were products to wash and clean hands on the go, but she questioned why regular decontamination efforts didn’t include clothes. That’s why they created their business, GarmaGuard. They said it was a garment and fabric cleaner that uses natural fuels to keep you safe, fresh, and clean.

Bianca said applying the garment spray was easy, and Joe modeled the product’s use for the Sharks by spraying it all over his clothes. It helps to eliminate odors, keep dirt and grime under control, and create fresh fabrics.

Pete advised that using their product GarmaGuard would result in people being able to protect themselves without looking like a surgeon wholly decked out in PPE. Bianca asked which one of the Sharks wanted to team up with them to GarmaGuard the world. 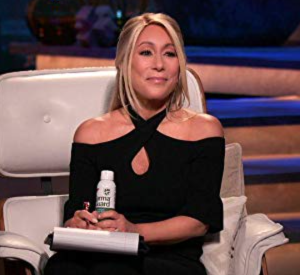 Pete let the Sharks know they had samples already placed in front of them. He and Bianca got out of the contamination suits as Joe left the stage. Daymond stated that he was a big fan of the high school play they put on. Blake, the guest Shark behind Tom’s shoes, agreed it was fun. Kevin said that it was excellent, “bad theater.”

Blake said that his very first business was a laundry and dry cleaning business where he would pick up customers’ laundry and then drop it off once it was clean and dry. Bianca told him they knew his history before they entered the Tank. Blake continued, stating that GarmaGuard could save people a lot of money on dry cleaning.

He elaborated that people would bring their clothes to him, especially if they were in college because the clothes smelled like smoke. Blake wanted to know if GarmaGuard would also remove the smoke smell so that customers could avoid spending money on conventional dry cleaning. Pete advised him that GarmaGuard was great at removing the smell of smoke. He said that many of his best customers were firefighters, which he networked with through his job as a police investigator.

Lori asked if the product could kill viruses, and Pete claimed it could. Blake wanted to know if it could kill COVID, which was a significant concern and a big question. The episode was filmed in the late summer of 2020, meaning that the first wave of the pandemic was raging, and we still didn’t know much about it, much less have a vaccine. Pete said they couldn’t claim that GarmaGuard could kill COVID yet, but they were working on it.

Mark Cuban transitioned into asking the couple about their sales. Pete explained that they’d been in business for a year and a half at that point, and their sales were $476,000 to date. Daymond said that half a million in sales was good. He asked if they had always been in a similar field. Bianca explained that she was a nurse, and that is where she got the idea. She wouldn’t want her children touching her when she got home because she had been around sick people all day. 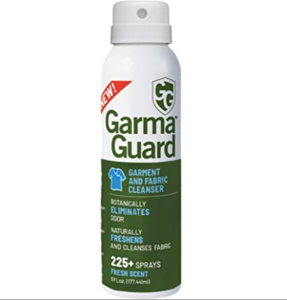 Mark questioned what the product cost to make as opposed to how much they sold it for. Bianca advised that GarmaGuard costs $1.85 a bottle to produce, and they marketed them for $12.99. Blake said it was a good margin.

Kevin liked their sales numbers, but he saw the golden ticket was if they could have “Kills COVID on your clothes” on the label. He thought it would be a good message, and Pete said they were looking to get it within six months to a year. This disappointed the Sharks, even though that would be pretty reasonable under normal circumstances.

Mark went out, saying it was too early for him to invest. Kevin also went out, saying it wasn’t his type of product if it couldn’t kill COVID. The couple thanked him. Daymond went next, stating that he thought it was a good enough business that they might not even need a partner. He saw them as able to scale up to a multimillion-dollar company independently. He went out.

Lori said that she thought GarmaGuard was a great product. She liked the smell and saw them moving in a good direction. Lori said she would be a customer and thought it was too early to hop on as an investor. Lori liked investing when a company was fully formed, and she went out.

Blake was the last one left. Pete pointed out that he had already run a similar business, reminding him of the laundry days. Blake wanted to know what their projected sales would be for the year. He also inquired about their profitability for the year. Pete explained that they would make about $500,000 for the year and had a 20% margin. The business was going to be profitable by $100,000.

Blake sat in silence for a moment, weighing his options. He finally spoke, saying that he thought they had a great business with significant margins. Blake didn’t believe they needed to give up any equity when they were already profitable. He spoke about his shoe company, telling the young entrepreneurs that he was able to walk away from Toms Shoes with a lot of money because he didn’t take on investors for a long time.

He advised them to continue with their current strategy of getting the rights to put “This can kill COVID” on the bottle, and their sales would take off immediately. They would be able to fund the increased production of GarmaGuard with the cash flow from direct sales.

Pete pointed out that they would buy in early before making that claim. Blake shook his head, but Pete continued. He asserted that they had 14,000 loyal customers at the moment who returned at a rate of 33%. He saw the COVID claim as the cherry on top of the sundae.

Blake said that he thought the information that Pete was giving him just made it even more apparent that they did not need investment at the moment. It was not the right time. They would need to keep grinding, but in the end, they would have millions more dollars in their pockets because they didn’t give up equity in the early stages. Blake told them that he loved them, but he went out. They thanked the Sharks and left the scene.

GarmaGuard Now in 2022 – The After Shark Tank Update

Even though they walked off the Shark Tank stage without a deal, GarmaGuard is still in business and thriving in 2022. The product has over 250 five-star reviews on its website. Customers rave about the spray’s ability to eliminate smoke smell and odor, disinfect their gym gear, and neutralize cooking smells, like fish or onions, on clothes. Most of the reviews state that the scent is refreshing without being overpowering. 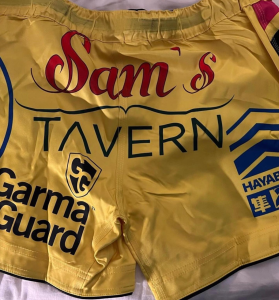 According to the GarmaGuard Facebook page, they are working with UFC fighters to promote their product. In April 2022, the 28-year-old professional MMA fighter Ange Loosa fought with the brand name on the back of his shirt. This isn’t their only sports-related advertising campaign. GarmaGuard also works with Sanford Mixed Martial Arts and football cornerback Parry Nickerson of the Minnesota Vikings.

On Shark Tank, Pete and Bianca mentioned that they could not make claims about GarmaGuard killing germs and viruses because they were not certified by the EPA. Those permissions may still be in progress because the packaging and marketing have not changed. It’s advertising still does not contain any claims about its germ-killing abilities. The label calls it a natural odor remover and fabric cleanser. 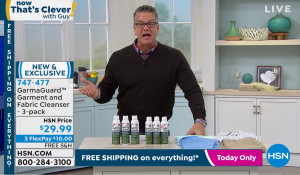 Kevin O’Leary expressed frustration that the pair couldn’t, as he put it, put a little COVID germ with an X over it on the bottle. There are no claims on the GarmaGuard website about its effect on COVID-19, so it’s safe to assume that they were not able to prove that the fabric cleanser could kill it.

Still, the product seems pretty popular. While it is sold on the Walmart website, it frequently sells out there. In 2021, GarmaGuard was featured in a live selling segment on HSN. It is available individually or in packs of up to twelve on their Amazon storefront and on their website.