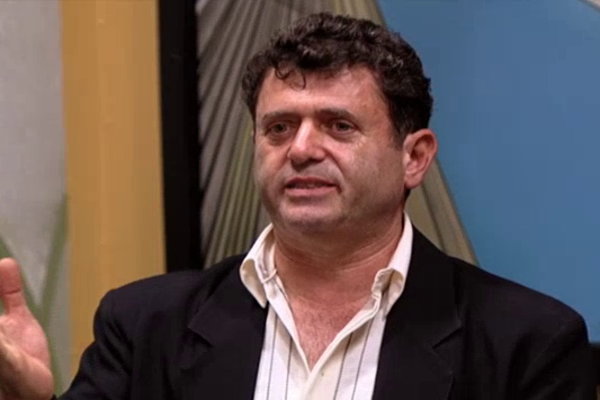 Based in Hollywood California, Sante Le Brea is owned by a father and son team of Dean, Arthur, and Sammy, and is marketed as a healthy restaurant trying to ride the trends of their location. There is also a manager by the name of Mark who has a bit of an undefined role but seems to be enthusiasm. As with many failing places, Dean has tied in a lot of debt including his own mortgage is on the line if Sante La Brea fails. Just before Chef Ramsay shows up, Sante La Brea’s head chef is a no-show. Let’s see what happens next. 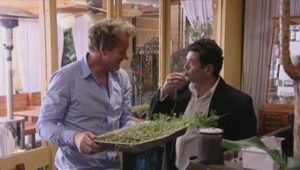 Dean enthusiastically welcomes Chef Ramsay and offers a tour of a recent remodel, which includes natural grass on the top of a balcony, which Dean takes a bite of while maintaining full eye contact with Ramsay. It’s hard to tell at this point if Dean was attempting to show edible greens being grown on the site, or if he wanted to try to establish an odd sort of dominance early on. In describing the menu, there appears to be a vegan version of every plate alongside fish and chicken. As far as problems go, Mark seems to be spending far too much money in adding design, and we’ll see if the menu is also one. Ramsay orders the patty melt, the mogo tofu, and a few other items. The Turkey Patty Melt appears burnt on the inside, and low quality. Luckily, the dog of the next table over was ecstatic to have it. Next up is the mogo tofu, which causes a small fit of laughter from the chef. The rice is severely overcooked, and the rest of it looks so bad he doesn’t even take a bite. Last is the blackened salmon, which tastes like the fish has gone bad in the fridge.

Speaking to the owner after, it turns out both taste and presentation were poor. In inspecting the kitchen, cross-contamination of Salmon and Turkey has occurred, which is far from ideal. Plenty of produce has been rotted through, which greatly embarrasses Dean, who then blames the head chef who is absent, and then soon after takes responsibility. The chef finally shows up 2 hours late and faces the heat of some key observations. He doesn’t seem to respond to any of the issues, and despite everyone wanting to drop him, they don’t feel they could continue without the head chef.

Next, the first-day dinner service begins. The head chef has complete immunity from the owners and claims he can get away with anything. Ramsay picks up on this and asks why Dean is afraid of the chef, and he gives the same excuse as above. The customers, on the other hand, seem to think that some of the pets on the patio could prepare better food. Hearing this, Ramsay checks out the vegan “meats” which are a little bizarre. After dinner, Chef Ramsay has a meeting with the staff, with a special focus on responsibility. Despite Dean trying to take all the blame, it’s clear it isn’t quite his fault. He then orders the staff to get cleaning to ensure the place can at least be seen as sanitary.

The next morning, Chef Ramsay meets Dean at the top of the Hollywood Hill to help him vent some pressure. He talks up Dean and makes sure he knows he’s the boss of Sante La Brea. This starts shakily as he’s inherently a shy and gentle guy, but Ramsay puts some steel behind him until he can finally show some real anger. When he’s back at the restaurant, he goes to town on his son who later thinks this is “awesome” as Dean is showing some real ownership.

Now with the kitchen clean, Ramsay jumps into the kitchen to show Sante La Brea to show the staff how to properly prepare some specialty dishes which include a Halibut dish, which is a remarkably delicate fish to prepare. Before dinner service, Ramsay has a quick meeting which included having an officer handcuffing Dean. While this is initially worrisome, it’s revealed this is being done for his own good, as it’s to restrict Dean from doing the jobs that the people he’s paying should be doing. Instead, he has to command them to get things right.

The dinner service begins, and quite soon thereafter, Mark is shown to be sweating bullets – in a white shirt. In the kitchen, Dean is running the kitchen in a tight fashion, much to the enjoyment of the customers. In fact, the specials nearly sell out. Mark ends up making a poor choice by stealing a special from other customers to give to his, which causes Dean to snap at him, and after a few moments sends him to get a new shirt while Ramsay runs to get Mark some Deodorant. Soon thereafter, Dean’s cuffs are removed and he continues to be the boss without the restrictions. Overall, the night was shaky but it was a great show of progress and was perhaps some of the greatest TV that Kitchen Nightmares have ever produced.

Over the night, Sante La Brea is fully renovated with a fresh look to accentuate the fresher food. There are plenty of natural woods and greens that make it absolutely beautiful without being too high class. The menu is also reworked, which makes Dean and his sons over the moon. When it came time for the relaunch, it was also a time for some major changes in the kitchen. Dean finally confronts his head chef and he (predictably) leaves. Ramsay regrets making Dean this aggressive, and the head chef comes back saying he wants to apologize to Ramsay, but then ends up taking $100 from him to continue working for the night. At the front, customers started to pile up. Luckily, after a concerted effort by every staff member, owner and Ramsay, the night ended on a big success. After the service, Dean and Chef Ramsay have a sit-down, where he says he supports Dean and hopes he can become a great manager alongside his sons. The episode ends with a great deal of hope that both Santa La Brea and Dean will grow as a result of this experience. But where are they in 2022?

Santa La Brea was revisited in a subsequent episode of Kitchen Nightmares where it was revealed that Dean would be retiring and traveling overseas and that his sons Sammy and Arthur would be taking over the restaurant (with Sammy’s girlfriend stepping in as the new manager).

That arrangement didn’t last, however. By 2011, just three years after they were featured on Kitchen Nightmares, it was announced that they’d be selling the business (according to online records, the sale was officially completed in June 2011). While Sammy and Arthur never revealed what the official reason for closing was, many believe that they were burnt out and needed a break. It’s currently unknown whether or not they’re still involved with the restaurant industry (a Google search didn’t come up with any results).

Unlike other restaurants that’d been featured on the show, however, Santa La Brea had actually been quite successful prior to closing. They had more than 100 reviews with a 4-star rating and many customers had taken the time to write about their experiences online.

As far as their old location goes, it’s since been replaced with a German beer bar called Wirsthaus, which is still open as of February 2023.  And judging from some of the reviews, they’re doing quite well despite the ongoing pandemic.