Top 10 Scams In The World – Learn What To Avoid

Scammers have been around forever. They’re known for sending you an email claiming to be a Nigerian prince and asking that you send them money to get a prize. However, scammers are all around the world. These are ten scams you need to aware of so you don’t become a victim:

If you go to Disney World with your family, be weary of any pizza menus that have been slipped under your hotel room’s door. A common scam is that you order a pizza, give your credit card number over the phone, and then never get a pizza. To avoid getting scammed, ask your hotel’s concierge or front desk for recommendations of pizza places.

In the Times Square area it is all too common to have a young person, usually a man, yelling on a street corner, “Listen to my music! Check it out!” He hands you what you think is a free CD and in some cases is so pleasant that he’ll even autograph it for you. Once the CD is in your hands then he demands money and won’t take the CD back. If this happens to you, gently place the CD on the ground and walk away from the situation.

Vietnam’s Sinh Tourist bus line is considered the best among tourists and expats. However, there have been new bus lines popping up, often with the name Sinh Tourist. The problem with this is that if happen to get on the scammers’ bus, you’ll have poor service and may even end up having an unexpected stay at a pricey hotel. Of course, this hotel will have a relationship with the scammers. Unfortunately, until you get on the bus there’s no way to find out which bus line is the good one and which are the scammers.

Everyone is Las Vegas is in a hurry, including the cab drivers. However, cab drivers can sometimes be sketchy, too. A cab driver may take you to your hotel, help you with your luggage and then say he’s very busy and wish you a good trip. It isn’t until later that you realize that your cab driver didn’t give you one of your bags. To avoid becoming a victim, make note of the driver’s name, company, and cab number when you get in. This way, if they take your luggage you have some recourse.

Tourists often want a photo of them on a camel in Cairo. Camels and camel trainers are everywhere in that area. For a meager sum of $15 you can walk up to just about anyone with a camel and ask to sit on the camel. That person will have the camel kneel so you can get on its back and then stand up. Once standing, the trainer will ask you for even more money. Without this money you’ll be stuck on a camel’s back. To protect yourself from this scam, make sure to arrange camels through your travel company. Don’t just get on some random person’s camel.

A fairly common scam is that someone will call your hotel room, you pick up the phone, and that person tells you that there’s a problem with your credit card. Of course, like the good citizen you are, when they ask you to read back your credit card number you think nothing of it. However, if you actually do read back your credit card number it could lead to lots and lots of charges. In order to protect yourself, hang up when you get a call like this and call the front desk directly. Verify that what the scammer said was true. 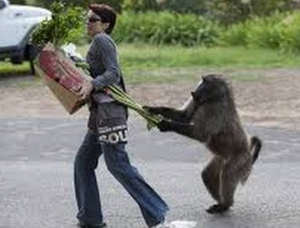 Monkeys in Bali are allowed to run free. This is trouble for you because monkeys have sticky fingers that allow them to easily pick up anything they want, be it food, jewelry, or other valuables. Some of the locals are generally available to convince the money to give you back your valuables. Of course, the locals want a tip for this work. If a monkey snatches something from you, find the help of a staff member. Additionally, make sure to keep your valuables very close to you.

Barú Island’s Playa Blanca is a common tourist spot. With white sands and the crystal blue ocean, it’s something you have to experience at least once on your vacation. When you’re lying on your beach towel and tanning you may feel a pair of hands on your shoulders as a soothing woman’s voice asks you to accept a free massage. Of course, the massage is only free until she’s done. To avoid becoming scammed, remember that nothing in life is free and don’t accept this massage.

Rome has become famous for the fake baby ruse. A woman trips and throws a bundled doll into your arms or simply drops the doll on the ground. While you are distracted pickpockets steal your wallet. Usually, these pickpockets are children. Make a point to be aware of women who throw their babies or any other distractions that just seem to be fake or extremely unusual. This is your best defense against being a victim in Rome.

The largest market in Bolivia is Cochabamba’s famed La Cancha. In this market are the most congested and cramped streets in the entire country. Due to this area’s congestion, tourists in this location are far too often subject to “the squeeze” in which you find two large men standing next to you in very cramped quarters. In many cases you cannot even move your arms. Soon enough the men leave and you realize that they have taken off with almost all of your belongings. Make a point to pay extra attention at cross streets, since these are the most common areas that scammers lie in wait.