Prior to appearing on Shark Tank, Aaron Liskov and Andrew Zahornacky were traveling for business – a lot. This provided all of the inspiration that they needed to start unPack, their clothing curation, and delivery service. They realized that when you spend much of your time traveling, you don’t have time to go shop for toiletries, or do laundry. They imagined being able to arrive at the hotel with fresh clean clothing and toiletries already there. They created unPack, which allowed customers to choose clothing for their trip, and then hand it off to the hotel front desk when they were done with it. But a business like this requires lots of capital to buy new clothing, and maintain what they had. Aaron and Andrew decided to ask the Sharks for an investment. 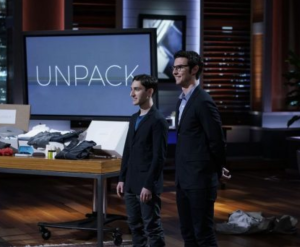 Aaron and Andrew walked out onto the stage and into the shark tank. As they introduce themselves, they are getting interested looks from the sharks. Andrew was wearing something that made him look like Gandolfo almost. It was robotlike in nature. Andrew said that they were the cofounders of unPack. He requested $500,000 investment in exchange for 40% equity stake in their company. Erin started the presentation by letting the Sharks know that he and Andrew had flown from New York, and he had spent $50 checking a bag. Aaron said that he wasted more time packing, driving to the airport, and then had to wait 30 minutes after the plane had landed to pick up his stuff.

Andrew smirked at him and said that he didn’t have to pack a thing. He just for the close on his back. He claims that he just used unPack by logging onto the website, telling it where he was going and when, and once he got to his hotel everything was there waiting for him. Aaron specified that it was premium location online luggage that was waiting at his hotel so that he didn’t have to pack. Aaron asked how Andrew could afford such a thing. Andrew insisted that he paid less than Aaron did for his checked bag. Aaron said that he had brought nearly his entire closet, and still felt like he is brought the wrong clothes. Andrew said that he didn’t have that problem. He called unpack his personal concierge. Aaron asked if he could ever unPack, and Andrew told him no but that he’d make an exception. Aaron exagerately pulled off the cloak he was wearing to reveal a normal outfit underneath. The sharks rolled their eyes at the theatrics.

Aaron told the Sharks that unPack was ready for take-off. Andrew asked them who wanted to join forces. Mark Cuban smirked, called them Abbott and Costello, and asked what the cost of the service was. Andrew said that they would be able to ship anything that the customer wanted, from the set of clothing to underwear and socks. They were not shipping shoes however. Daymond asked if they were able to serve both men and women, and Andrew told him that they could, but that mostly men had used the service to date.

Kevin asked if the clothing was used, and the two entrepreneurs admitted that they were. This put all of the Sharks in a state of shock. Lori said that the thought of wearing someone else’s clothing was kind of horrifying. Daymond asked how the sizing worked, wondering if they just supplied a bunch of ponchos. Andrew told him that customers would fill out a profile that was similar to other services in the style curation or clothing delivery space. Aaron said that they would take that data to figure out your size and style and figure out the context of your trip to ship the appropriate clothing. Mark asked them how much it cost.Aaron told him that it was $20 per day, and Daymond clarified that a 5-day trip would cost $100. Andrew agreed.

Lori said that she has a hard time with clothes fitting her. She would be more worried about the clothing that was waiting for her at the hotel, and whether not it would fit her right, and that she had nothing else to wear than having to pay for checked luggage. Kevin followed up with another good question – what if it didn’t arrive on time, or at all. Aaron thanked him for bringing that up, stating that he thought that was something that unPack could really excel at. He said that the entire fashion and e-commerce industry is already working to make sure that garments fit well the first time to reduce the return rate.

Robert wanted to know exactly what problem he would be solving since they stated at the top of their presentation that they would be saving the bag check fee. Aaron pointed out that unPack would also be making the customer’s trip better. Robert stated the obvious – that if he stayed on his trip longer than 2 days, he would not be saving any money. Aaron tried to say that the customer would benefit the moment they put the clothes on, but the Sharks weren’t having it. Daymond said that if Kevin O’Leary was to use the service, he would still need to pack toiletries and his teeth, which would require a bag.

Aaron said that they have learned a lot about their target customer in the last 6 months that the have been in business. The Sharks were surprised that they’d only been in business for so short a time. Lori interrupted an exchange between Kevin and Mark to ask if they had any sales. Andrew let her know that they’d had 40 bookings in those 6 months. He continued, saying that they had 37 people actually use it. Mark Cuban collapsed in laughter, wheezing out that they’d made hundreds of dollars, and wondering what their reviews were like. Andrew powered through all of the Sharks taking pot shots at them, saying that they were having a difficult time serving their customers, and that is why they were seeking a deal with the Sharks. Robert told them that the fact that they were brand new was a problem since they were attempting to compete within two large competitive spaces.

Robert continued, saying that they were going against large companies for the consumer who wanted to curate clothing. The whole thing of saving people money to check a bag was a separate issue, and they were not really saving people money. Aaron tried to say that the savings was not the issue that they were trying to solve. Mark told them that they were trying to solve the wrong problem. Then he really started laying into the pair, saying that their name sucked because suggested that they were attempting to compete with the people who package and ship with them. Mark suggested changing the whole business plan, He suggested changing the name to FUNpack, being able to pick from a list of activities, and having an outfit just show up. Andrew said that’s the company that they wanted to have, but it would require a complete overhaul.

Aaron tried to say that their business was “synchronized to the trend in the airline industry” where everything was getting organized into microtransactions. Robert said that the more that they talk, the more complicated the business seems to get. Aaron said that it just “empowers the value proposition.” It sounded like he was attempting to impress the Sharks with his knowledge of first-year business school terms. Robert told them that he hated the business idea because he didn’t think people would be psyched about wearing used clothing. He went out.

Kevin said that he thought their business proposition had been horrendous, but Kevin was still looking for the upside. He wanted to understand their business model right out of the gate. He thought if they had been clearer with that, then they might be more likely to get a deal. Kevin went out. Daymond was up next, saying that he had invested in a tuxedo renting business. He told them that the largest problem that they faced was the cleaning. He said that his business was only able to rent a tux out 12 times before they needed to throw it away. He let them know that they were not really solving the issue of luggage since most people would still need to bring things with them on a trip. Daymond also went out.

Aaron said that it was experimental, and that’s why they believed that it had a lot of potential. He insisted that people also called bottled water ridiculous 30 years ago. Lori told him that they really had to stop and pick one thing to concentrate their attention on. Lori said that from an investors point of view, it looked like a complete nightmare. She was the last shark to go out. Kevin told that it was time to go packing. Andrew told the cameraman after it was over that it would be really easy to give up after a disaster like that, but he still had faith in their business. Let’s see if that faith was able to take them anywhere without a Shark Tank Deal.

unPack Now in 2022 – The After Shark Tank Update

The company hasn’t made much buzz since 2016. While their official website is still online, there’s no longer a register page (ie. it’s no longer possible to get a rental). Their FAQ and About pages, however, are still there. There’s also a phone number listed on the site, though it’s unclear whether or not it is still active.

Their social media accounts haven’t been updated recently either. On Instagram, their last post was about airports back in February 2017. And on Twitter, they haven’t tweeted anything since May 2017.

Given all that, it’s probably fair to say that they haven’t been renting out much over the past few years so as of 2022 we would have to say the company is now defunct.