Andy Humphrey ran a specialty website for lawncare, selling hundreds of thousand of dollars worth of push mowers. He decided that he wanted to create his own mowers with the EcoMower name since the current push mowers on the market had blades that needed to be sharpened. Andy came up with the EcoMower – a eco-friendly push mower that pushed easier than the tradional push mowers, and did not need it’s blades sharpened. Would the Sharks bite on this interesting take on an existing product? Let’s take a look at how he’s doing now in 2022. 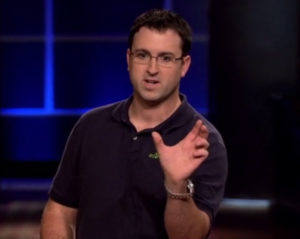 Andy Humphrey walked out onto the stage and into the Shark Tank. He was surrounded by AstroTurf. He introduced himself and said that he would like $90,000 in exchange for 20% of Eco mowers and he showed off the traditional lawn mower that he brought with him, that was used to contrast the Ecomower. He insisted that this traditional lawnmower was dirty, heavy, and loud. Andy also said that the lawn mower was dangerous because it’s blades spin at 150 miles per hour. The lawn mowers that most people use end up causing over 80000 injuries and hospitalizations per year.

Andy said that that was not the reason he was on the Shark Tank with his mower. He said the traditional mowers are terrible for the environment. The emotions that come from them are highly unregulated, but the amount of pollution that is emitted is like driving ten cars. And you didn’t understand why there’s all the fuss about cars being bad regarding pollution when lawn mowers are ten times worse for the environment. Andy said that reducing emissions from lawn and garden equipment is the next billion-dollar industry. Kevin wanted to know where he got that idea from, and Andy told him that the EPA is about to regulate emissions from lawn and garden equipment starting in 2012. He said that the eco mower that he invented was the solution to that problem.

Andy stated that the EcoMower, which doesn’t use any gas or batteries, was the most eco-friendly solution. He stated that the machine was also completely silent. Andy started to push the EcoMower along the AstroTurf, saying that it was very easy to drive. He stated that the clippings from the grass he was cutting wood go behind the mower, and fertilize the lawn. And he insisted that his product was different from old fashioned lawn mowers that did not have Motors. He said that the spinning blades do not touch. This means that there is no friction, which eliminated the need to sharpen the blades.

Daymond stopped his presentation and said that he was totally confused. He mocked the way that Andy said: “the grass falls gently behind the mower.” Daymond accused Andy of Romancing the truth. Andy looked insulted and asked the Sharks if they didn’t believe that the ego mower was going to be the category of the future. Daymond told him that there was already a category of push mowers that did not have motors. Robert wanted to know how big the competition’s market was, but Daymond said that there is no reason to say that those mowers didn’t run just as smoothly as the EcoMower. Kevin said that was Daymond was implying is that it was bait and switching the mower by not comparing it to the same category. Daymond said yes, and compared it to saying that he would reduce car emissions by inventing a bicycle.
Andy stated that the push mower Market was about half a million sold. Robert shocked at the low number. Andy insisted that this low number was due to needing to sharpen the blades, and the mowers being harder to push. Daymond asked him if he was saying that he was building a better bike. Jeff Foxworthy, who was the celebrity shark for the episode, stated that he understood what was different. It was that the blades did not need to be sharpened in the EcoMower. Damon asked Jeff if they knew for a fact that no other mower had that ability. Jeff said that he was not aware of that for a fact. He asked Andy if the EcoMower was the only one on the market that had blades that did not need to be sharpened. Andy said that was true for the US market. Andy stated that there was German products and products in Europe that were similar. Robert stated that the real value of each EcoMower was not that the blades did not need to be sharpened, but he called it a branding plate.

And he said that he started the business online because he wanted to make money from day one. He stated that he’d been selling the regular push mowers online, generating $350,000 in sales. Kevin pointed out that what he was actually selling was his competing product, And asked if he was also selling Eco mowers. Andy let him know that what he brought to the Shark Tank was a prototype mower. He said that he was looking for an investment from the Sharks to help him manufacture the mower. Kevin wants to know why he didn’t just go to a large manufacturer and ask them to put the ego mower name on the traditional push mower. Robert asked Andy why a big player in the mower space couldn’t just Rebrand his product the green-cut mower, and under cut the Ecomower. Andy insisted people connect more with the Eco name.HarborOne to know if Andy builds the mower himself. And he said that it was a prototype, and he didn’t build the mower himself.

Damon said that he was just going to create a company called Green mowers, and he knew a guy in the hood who would sharpen everybody’s mower for the rest of his life in exchange for $450,000, and he said that he didn’t realize that he came onto Shark Tank to make jokes. Robert called his whole presentation a joke. Andy Then tried to say that people buy push mowers because you can burn over 400 calories in an hour but just by doing a lot of yard work. He said that there was a whole section of the market that wants to mow Lawns to stay healthy. Diamond point out that they were probably already doing it with someone else’s push mower.

Robert said that the whole value of the business was in the name. He stated that he thought the presentation should have been about licensing the name you come over to the largest manufacturer of push mowers. He wasn’t sure if that would work, but the business model doesn’t make sense as it is. Robert went out. Barbara said that she didn’t even have confidence in the name. She said that, and you would have huge competition in the market. She went out. Kevin stated and proven himself a successful online retailer of mowers with his $350,000 in sales so far. He did say that Becoming a manufacturer was a bit of a leap. Kevin stated that he was going out, because he was confused by the idea and not that interested.

Jeff Foxworthy he could see the business taking off in the future. He said that it would be a good product for people with small lawns, and Eco mowers was a good name. Jeff pointed out that Andy hasn’t sold one of them. And he said that the Econo it was better than the ones he had been selling. Damon told him that they weren’t sure if it was better than the other push mowers because and I didn’t bring one as a comparison. Jeff apologized and went out. And so that all the sharks were out, and he asked him what he could have done better in his presentation. Robert told him that he should ask them to invest in a product that he hasn’t sold any of. He said that Andy creates a brand, put the brand on someone else’s mower, but hasn’t sold one yet. Damon said that the whole thing was offensive. And he was asking for $90,000 when he hasn’t even sold one unit.

Kevin told Andy that his presentation was met with limited success. And he said that his poor performance was due to the Sharks not being equal people. Jeff stated that there is no one more eco-friendly than he was, but that had nothing to do with it. Robert told Andy not to insult the people that he was asking to borrow money from. Robert said that they were all eco-conscious on the Shark Tank. Kevin wish him luck, and Andy walked wordlessly from the stage. Once he was gone, Daymond again mocked Andy, saying that his presentation was essentially him saying that he would reduce emissions by making a thing that was around before emissions even worse. Jeff said that he didn’t appreciate being told that he wasn’t eco-friendly because he didn’t want to invest in a bad product. Barbara stated that he was just making an excuse for himself.  Let’s see how EcoMowers did after their Shark Tank Failure.

EcoMowers Now in 2022 – The After Shark Tank Update 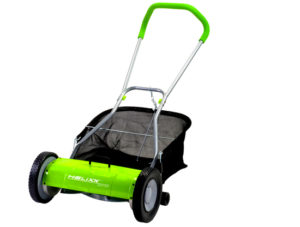 Even the Helix Reel Mower, which they were previously selling on Amazon, has been taken down from the site. They were last available in 2017 (according to the reviews) so they have been gone from the market for years. Judging from the mixed reviews that it had received, however, it’s probably not that big of a loss in the long run looking back from 2022.

Note: EcoMower is not to be mixed up with Eco Mower, a lawn care company that’s based in New Zealand.

The Gazette Review is your daily news source covering everything from world news to personal finance. We provide the most recent, unbiased accounts of the news that matters to you. Contact us: edito[email protected]