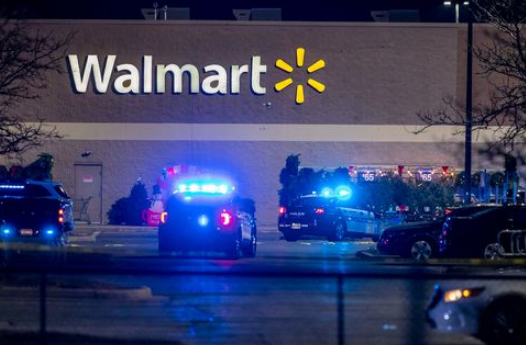 Six people were killed in a Virginia Walmart on Tuesday, November 21, after the store’s manager began firing; he later killed himself. The deceased has been identified as Brian Pendleton, Lorenzo Gamble, Tyneka Johnson, Randall Blevin, and Kellie Pyle. The sixth victim was 16-year-old Chavez-Barron; his name was previously withheld as he was a minor.

The shooter was later identified as 31-year-old Andre Bing, an overhead team lead, who has been working at Walmart since 2010. He came into the store armed with a 9 mm handgun and had multiple magazines with him, all of which were purchased legally that morning. Bing had no criminal record.

Following the incident, police found a note left on his phone that accused his co-workers of mocking him. It’s not known at this time when the note was written but he said that he was pushed to the brink when his phone was hacked.

His coworkers who have survived the shooting said that he was known for being hostile with others and was generally difficult to deal with. One survivor said that he had targeted specific individuals during the incident, going as far as shooting multiple times even though they had already been hit.

According to Jessica Wilczewski, an employee who had only worked at the store for a few days at the time of the shooting, the employees had gathered in the break room prior to starting their overnight shift late Tuesday, when Bing entered and started shooting. She believes she was spared as she was a new employee and was not familiar with Bing.

She said that after he began firing, she was pulled under a table by a co-worker to hide. However, Bing eventually told her to get out. Once he saw who she was, though, he simply told her to go home. She quickly got up and ran out.

Bing’s note on his phone, which consists of 11 paragraphs, consists mostly of rambling with references to songwriting and nontraditional cancer therapies. He also stated that his co-workers unfairly compared him to the serial killer Jeffrey Dahmer and that he longed for a wife, though he claimed he did not deserve one.

An individual who worked with him said that he had a tendency of being aggressive and hostile and that he had admitted that he had “anger issues.” However, he also had the ability to make people laugh at times.

The incident was the second major shooting this month in Virginia. Earlier on November 13, three football players who played for the University of Virginia was fatally shot on a bus while returning from a field trip. Two others were injured during the shooting.

The Walmart shooting also comes a few days after a gay nightclub in Colorado Springs was attacked—an incident that killed 5 and wounded 17.