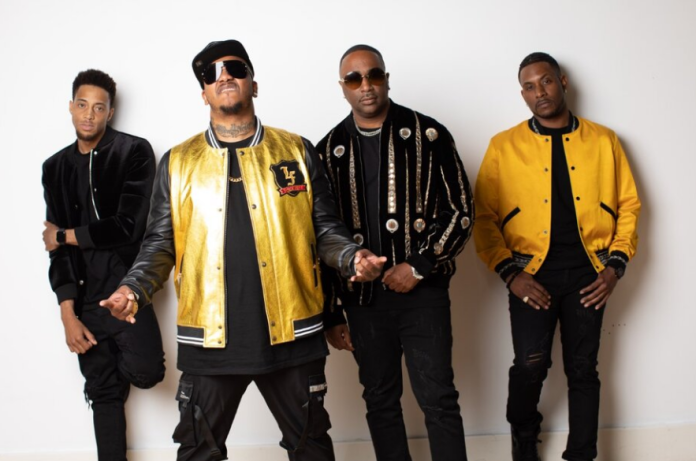 The members had originally met while they were in school. Reginald Finley, Michael Keith, and Daron Jones—who had sung together previously—met Aldon Lagon and Marvin Scandrick while they were in high school. They eventually came together to create a group called Forte. Not only did they perform at talent shows, but they also sang at schools and churches around the Atlanta area.

Not long afterward, the group landed an audition where they sang for Sean Combs. Impressed, he later offered them a recording deal with Bad Boy Records. The group subsequently changed their name to 112, in honor of Atlanta’s Club 112, the nightclub where they had performed for Combs.

With that, they moved to New York City, where they began working on their debut album. Titled, 112, the project came out on August 27, 1996, and consisted of 19 tracks including “Only You (Bad Boy Remix) ft. The Notorious B.I.G. and Made”, “Only You (Clean Radio Mix) ft. The Notorious B.I.G.”, Cupid”, “Now That We’re Done”, and “In Love With You”,  Praised by critics, the album peaked at number five on the Top R&B/Hip-Hop Albums chart and also charted at number 37 on the Billboard 200 and at number 79 in the UK. It also spawned four singles, all of which were major hits.

To promote themselves, they also booked tours with New Edition, the Isley Brothers, Puff Daddy, and Keith Sweat.

Their Rise to Fame

The group released their second album, Room 112, on October 27, 1998. Produced by Combs, Mario Winans, Stevie J., Daron Jones, and Leslie Braithwaite, it included 19 tracks, many of which featured their label mates Faith Evans and Mase; it also featured artists MJG, Lil’ Zane, and Lil’ Kim. Some highlights included “Love Me (ft. Mase)”, “Love You Like I Did”, “Whatcha Gonna Do (ft. MJG)”, “Crazy Over You”, and “Stay With Me.”

A huge success, the album went on to peak at number 6 on the Top R&B Albums chart and at number 20 on the US billboard 200. Not only that, but it also charted in Canada and the UK. By early 1999, the album had gone platinum with more than one million sales. To promote the project, the group also joined Whitney Houston on her “My Love Is Your Love World Tour”.

Not long afterward, they released “It’s Over Now”, which reached the top of the Hot R&B/Hip-Hop Songs chart. It was soon followed by their third album, Part III, which came out on March 20, 2001. Unlike their previous projects, however, it was edgier and included more techno-flavored jams. Their last album with Arista Records, it consisted of 16 tracks including “Missing You”, “Dance With Me”, “Peaches & Cream”, “It’s Over Now”, “Don’t Hate Me (ft. Twista)”, and “Do What You Gotta Do.” They also promoted the album by joining Janet Jackson that summer for her All for You Tour.

Despite mixed reviews from critics, the album entered the US Billboard 200 at number two and went on to receive platinum certification by the RIAA. It also earned the group their first Grammy Award nomination. Not only that, but one of their music videos also earned them an MTV Best Video nomination.

While working on their third album, Combs, their executive producer, was repeatedly called to court in regards to a shooting incident. If anything, that was the start of their pending split with Bad Boy Records.

Wanting greater creative control, the group eventually signed with Def Jam, in early 2002. And a year later, they released their fourth studio album, Hot & Wet, which was a follow-up to Part III. Preceded by two singles, it consisted of 17 tracks including “Na Na Na Na (ft. Super Cat)”, “Knock U Down”, “It’s Going’ Down 2Nite (ft. T.I.)”, “Man’s World”, and “Slip Away.” While it reached number four on the Top R&B Albums chart, however, it failed to make any noticeable impressions. Reviews from music critics were also mixed.

It was soon followed by Pleasure & Pain, their fifth album, which came out on March 29, 2005. Upon its release, it reached number four on the Billboard 200 with more than 118,000 first-week sales. Some of the tracks included “Why Can’t We Get Along”, “Closing the Club (ft. Three 6 Mafia)”, “What the Hell Do You Want”, “U Already Know”, “Last to Know”, and “Nowhere.” Their first album to come with a parental advisory sticker, it spawned two singles, both of which charted in the US.

The group’s second top-ten album, it eventually received gold certification from the RIAA in 2005.

Hiatus and Switch to Solo Careers

In 2007, the group created their own record label called the One Twelve Music Group. There were also talks of a collaboration album with The Inc. Records.

After extensive touring, however, they decided to embark on their own solo projects. Allegedly, Daron Jones was the first to leave the group in 2007. Marvin aka “Slim” also began working on various solo projects. In 2008, he created his own label called M3 Productions Inc., and released a solo album titled, Love’s Crazy, which peaked at number 32 on the US Billboard 200; it also spawned a single titled, “So Fly (ft. Shawty Lo and Yung Joc). Not only that but he was also featured in 8Ball & MJG’s single “Cruz”

Michael Keith also left the group to pursue a solo career. Allegedly, the decision was fuelled by the fact that a former group mate stole his money. He later released a solo album titled, Michael Keith, in the fall of 2008. He also released two songs, “Sexy”, and “She’s My Superstar”, under the moniker “Dangerus” online.

By 2010, it was announced that Mike had reconciled with the other members of 112 and that they planned on releasing a sixth album in the near future.

In 2010, it was announced that the group had returned to the studio. Daron Jones later confirmed the group’s reunion in an interview; he also stated that it will include Q, Mike, and possibly Slim.

Fast forward to 2012 and it was confirmed that all four members of 112 had reconciled. The quartet later embarked on a tour called the “For The Fans Tour”, which consisted of four shows across the United States. A couple of years afterward, they reunited on stage to perform during the Bad Boy Reunion segment at the BET Awards.

They eventually released a new single titled, “Strawberry” in the summer of 2017. It was followed by “Dangerous Games”, which was accompanied by a music video.

And on October 27, 2017, they released their long-awaited sixth album, Q, Mike, Slim, Daron. Released through eOne, it featured 15 tracks including “Both of Us (ft. Jagged Edge)”, “Without You”, “Come Over”, “Simple & Plain”, “My Love”, and “Still Got Me.” While it wasn’t as big of a hit compared to their early albums, it did reach number ten on the Top Independent Albums chart. Not only that, but it also charted on the US Billboard 200 and on the Top R&B Albums chart.

Q. Parker and Daron Jones allegedly left the group sometime in 2020. That hasn’t stopped the remaining members from putting out new music, though. On September 4, 2020, Mike and Slim, who now represent the group, released an EP titled, 112 Forever. Their first release in three years, it came with nine tracks including the previously released singles, “For Us”, and “Spend It All.” Other tracks include “Forever (Intro)”, “Exclusive”, “Nowhere”, “Looking For Us, “S.I.A (Interlude), and “Anytime.”

Will they be replacing the members who left? It’s a possibility. According to a recent interview with Mike, they actually had a few people in mind- some of them even reached out to them. Despite some talks, however, nothing ever manifested from it. Mike later stated that there was still a lot of music that he and Slim wanted to do and that they didn’t want to “switch it up too much” for the fans. Given that, it’s probably fair to say that they won’t be adding any new artists to the group anytime soon. But who knows? Things might very well change with time.

When asked about their vision for next year, which also happens to be the group’s 25th anniversary, Mike stated that he would like to be on the Hollywood Walk of Fame with Slim. He also emphasized that he doesn’t feel like they receive as many accolades as they deserve.

As for the group’s past members, they all seem to have embarked on different solo projects.

What’s Reginald Finley Up To?

Finley was only with 112 for a short period; he left in 1994, just a year after the group was formed. After that, he worked as a “phone psychic” for a few years. From there, he went to St. Leo College, where he studied religion and philosophy.

He eventually took a hiatus from studying and began his own internet radio show called The Infidel Guy Show, which focused on educating the public about ethics, science, freethought, and philosophy. Not only that, but it also emphasized the value of critical thinking. By the time it ended in 2010, there were more than 600 shows.

He later returned to school, graduating from Amridge University in 2011. From there, he went to the State University of New York at Buffalo, where he completed his master’s degree. He also studied at Clemson University for a brief period in 2016.

The last that we’d checked, he was enrolled in a doctoral program at Euclid University. He’s also an instructor and has taught at various community colleges in Orlando, Florida. That’s not all, he also manages a website called AmazingLife.Bio, which provides children with information about planet Earth, and another called Cancer Cure Scans, which aims to educate cancer patients on the dangers of alternative medicine.

What Happened to Aldon Lagon?

Aldon Lagon, like Finley, left the group in 1994. Since then, he seems to have stayed away from the limelight. In fact, there’s almost no information about him on the internet. It looks like he may have worked on a track for the horror film, Sorority Row sometime in 2009, however, there’s no way to know for sure that it’s him.

Q Parker recently left the group with Daron Jones as they wanted to go in a different direction with their music. That’s not all, there also seems to be some legal issues going on between them and the current members of 112. In fact, that’s the reason why he and Jones won’t be participating in the upcoming Verzuz with Jagged Edge. In an open letter to fans and supporters, they thanked everyone for their love and support. He also revealed that “it’s a fabricated lie” that they quit 112 and that fans “will receive the true narrative” in due time.

It was later revealed that they had left due to issues regarding the trademark for 112, which Slim had the rights to, as well as personal differences.

What else has he been up to? Earlier this summer, he was featured in Double AA’s single, “Firework” which also featured the voices of Willie Taylor and Rl. As of 2022, it has been streamed more than 3,000 times on YouTube.

What Happened to Daron Jones?

Daron Jones allegedly left the group with Q Parker sometime in 2020. As explained above, they were in a lawsuit with their former 112 group members. It was later announced in 2021 that the US District Court Judge had granted Slim a $100,000 default judgment.

That same year, he released a new track titled, “Human”, which is available for streaming on Soundcloud.