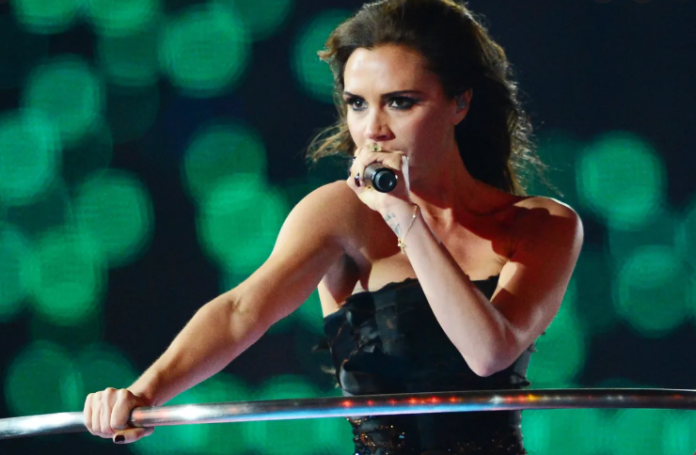 Victoria Beckham aka “Posh Spice” rose to prominence as a member of the Spice Girls in the 90s. Since leaving the group, she has started her own fashion brand, which has become hugely successful. Where is she now in 2023?

Early Life and Rise to Fame

Victoria Beckham was born on April 17, 1974, in Harlow, England. The oldest of three children, she and her siblings grew up in the village of Goffs Oak, where her parents managed a successful electronics business. When she was six years old, she watched the musical film, Fame, which inspired her to pursue a music career. She later went to Jason Theatre School and the Laine Theatre Arts Academy, where she studied dance and modeling.

In 1994, she answered a casting call seeking female performers who could sing and dance. She was ultimately chosen out of 400 women, alongside Emma Bunton, Geri Halliwell, Melanie C, and Melanie B. The girls would eventually become the all-female pop group, the Spice Girls.

On June 26, 1996, they released their debut single, “Wannabe”, a dance-pop song, which focused on the value of female friendships. While it received mixed reviews from critics, it was a commercial hit; it topped the charts in numerous countries including the UK, Switzerland, Hong Kong, Israel, France, Finland, Australia, Belgium, and New Zealand. Not only that, but it also reached number one on the US Billboard Hot 100 music chart.

It eventually earned them a Brit Award and Ivor Novello Award for Best British-Written Single.

Their first studio album, Spice, which incorporated elements of dance, hip hop, and R&B, came out on September 19, 1996. A worldwide hit, it peaked at number one in numerous countries including the United Kingdom, United States, Europe, Austria, Canada, Norway, and France, and spawned three additional singles – “2 Become 1”, “Mama”, and “Say You’ll Be There.”

In November 1997, they released their second album, Spiceworld. Their last album with Geri Halliwell, it consisted of ten songs including “Spice Up Your Life”, “Move Over”, “Never Give Up on the Good Times”, “The Lady Is a Vamp”, “Viva Forever”, and “Stop.” Another commercial success, it entered the UK Albums Chart at number one with more than 190,000 sales within the first week. It also topped the charts in 13 other countries including the United States, Canada, France, Australia, and Switzerland.

That same year, they starred in a musical comedy film, Spice World, where all of the girls played themselves. Despite negative reviews from critics, it was a box office success. In the United States alone, it grossed $10.5 million during the opening weekend.

By early 1998, it was announced that the Spice Girls would be embarking on their first concert tour. The Spiceworld Tour, as it was eventually called, kicked off in February 1998 and continued until September 1998. In total, there were 97 shows, 41 of which were in North America. To date, it remains the highest-grossing tour ever by an all-girls group.

Following the tour, the girls began to work on their own solo projects, and thus the group was put on hiatus.

On August 14, 2000, Beckham made her first appearance as a solo artist in the single, “Out of Your Mind”. A collaboration with Dane Bowers and True Steppers, it ended up reaching number two on the UK Singles music chart.

Prior to that, she had performed the song “Out of Your Mind” at London’s Hyde Park to raise funds for the Prince’s Trust charity.

Shortly afterward, she signed a recording contract with Virgin Records, the same company that the Spice Girls had worked with. Her debut solo single, “Not Such an Innocent Girl” was later released on September 17, 2001. Produced by Steve Kipner, it peaked at number 6 in the UK and charted in several other countries including Italy, Belgium, Scotland, Spain, Europe, and the Netherlands. It was also accompanied by a music video that featured two Victorias: one that’s dressed in all black (‘the bad girl’) and one that’s dressed in all-white (‘the good girl’).

Her first and only studio album, Victoria Beckham soon followed. Released on October 1, 2001, it consisted of 12 tracks including “A Mind of Its Own”, “That Kind of Girl”, “Every Party of Me”, “Watcha Talkin’ Bout”, “Midnight Fantasy”, and “Girlfriend.” While reviews were mixed, it reached number 10 on the UK Albums Chart. It also charted in Australia, Ireland, and Scotland.

The second and final single to be released from her eponymous solo album, “A Minds of Its Own”, came out on February 11, 2002 (she had previously promoted a third single but it was ultimately shelved following the announcement of her second pregnancy). In the UK, it peaked and entered the music chart at number six with over 56,000 sales. A number of behind the scene videos were also included in the DVD release.

Signing a new contract with 19 Management and Telstar Records, she began working on a new album in 2003. However, she was unsatisfied with the results; she subsequently returned to the studio to record new material.

Her first single with Telstar, “This Groove”/Let Your Head Go” later came out on December 29, 2003, in the UK. Released as a double A-side, it debuted on the UK Singles Chart at number three and also charted in Europe, Scotland, Romania, and Ireland. To promote the single, Beckham also made a number of television appearances during the holiday period.

Beckham had planned on releasing a second single titled, “My Love Is For Real” in the summer of 2004 but it was ultimately shelved after Telstar announced bankruptcy in April 2004. As a result, she gave up on her music career to focus on fashion instead.

Reuniting with the Spice Girls

In 2007, the Spice Girls returned for a reunion tour, which saw them performing in over 20 cities across North America and Europe. The tour began in Vancouver, Canada on December 2, 2007, and continued for several weeks before ending in Toronto, Canada on February 28, 2008. One of the highest-grossing concert tours of 2008, each of the girls including Beckham, allegedly earned  £10 million. Unlike her bandmates, however, Beckham did not sing a solo song on the tour. Rather, she posed in the style of a fashion show.

A second reunion came in 2012 when the Spice Girls performed a medley at the 2012 Summer Olympics closing ceremony in London. During the final minutes of their performance, they each climbed on top of their decorated taxis for a lap around the stadium, which thrilled everyone in attendance.

The girl group reunited a third time for a 2019 concert tour, however, Beckham chose not to participate as she wanted to focus on her fashion brand instead.

Beckham launched her eponymous fashion label in September 2008. Since then, the brand has expanded to include luxury handbags and other products. In the first quarter of 2011-12 alone, it generated more than £60 million in sales. That same year, she received a British Fashion Award for Designer Brand of the Year. As of 2023, there are more than 400 stores around the world.

Prior to that, she had made numerous appearances on the runway and had also acted as a fashion editor for Harper’s Bazaar.  She had also launched her own denim label and eyewear collection, both of which were made available at Saks Fifth Avenue in New York. In 2007, she also launched her own line of perfumes in the United States.

In 2019, she also launched a beauty brand called, “Victoria Beckham Beauty”, which uses 100% post-consumer waste for its secondary packaging; its shipping materials are also biodegradable or recyclable. Their first line of products included eyeliner and eye shadow palettes. A line of lip tints and pencils was later released the following month.

Over the years, she has made numerous television appearances. In 2000, she starred in her own documentary, which aired on Channel 4 in the UK. Victoria’s Secrets, as it was titled, followed the former Posh Spice as she interviewed other celebrities including Elton John. A second documentary called, Being Victoria Beckham, was later released in March 2002. Unlike the first episode, it followed her at various recording and photoshoot sessions and also saw her discussing her career as a solo artist

It was followed by three additional documentaries: The Real Beckham, which focused on her and her husband’s move to Madrid, Full Length & Fabulous: The Beckham’s 2006 World Cup Party, which centered around them hosting a party at a marquee in their Hertfordshire mansion, and Victoria Beckham: Coming to America, which documented her family’s move to the United States.

An unscripted reality series, it premiered on July 16, 2007, in the US and Canada. However, it was heavily scrutinized by critics. Still, it was one of the most-watched programs in its time slots. That same year, she made a brief cameo in the ABC comedy-drama Ugly Betty.

Since then, she has appeared in several other shows including Jimmy Kimmel Live!, The Ellen Degeneres Show, Good Morning America, Live with Kelly and Ryan, and Entertainment Tonight. In 2008, she was also a guest judge for the fourth season of Project Runway,

Aside from appearing on television, she has also written a couple of books. Her first, Learning to Fly, was released on September 13, 2001. An autobiography, it documented her time with the Spice Girls, her childhood, her career at the time, as well as her marriage and family life. Not only that, but she also talked about her eating disorder. Met with positive reviews, the book eventually became the third best-selling non-fiction title of the year. In the US alone, more than 500,000 copies were sold.

Her second book, That Extra Half an Inch: Hair, Heels, and Everything in Between was released on October 27, 2006. A fashion advice guide, it included tips on fashion, beauty, and style. Another best-seller, it has since been published in the US, Russia, China, Japan, Portugal, Lithuania, and the Netherlands.

The Beckhams’ oldest son, Brooklyn, recently tied the knot with 27-year-old actress Nicola Peltz, on April 9, 2022; the two had previously dated for two years. According to an interview, the newlyweds currently split their time between Palm Beach and LA.

As for their second-oldest son, Romeo, he has relocated to Miami for work, and since Cruz is in between boarding school and home, they only have one kid left at home- their 10-year-old daughter, Harper.

What else has the Posh Spice been up to? She’s made some appearances in Good Morning America, The Tonight Show Starring Jimmy Fallon, BILD LIVE, and Live with Kelly and Ryan. Earlier this year, she also appeared in her husband’s documentary, David Beckham: Infamous.

And in June, she shared a series of photos of herself alongside the Queen on social media for the Platinum Jubilee celebrations. Despite her best intentions, however, some fans have described the posts as “self-absorbed.” Still, you have to admit they’re some pretty nice snaps of the fashion designer and Monarch.