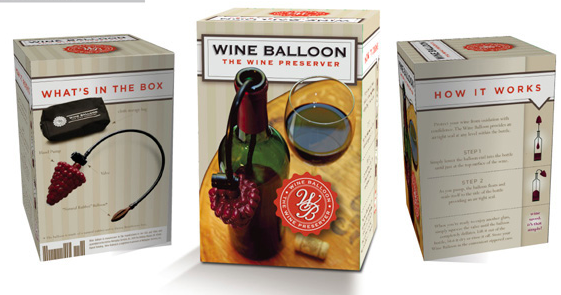 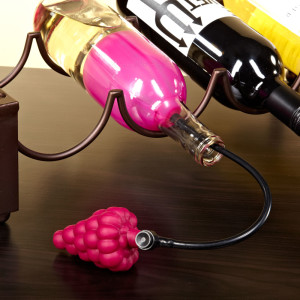 Eric Corti and his wife are two people who like to sit back, relax, and enjoy a glass of wine every now and again. However, they are not the kinds of people who can really finish a whole bottle in one sitting and if there is one thing that all wine drinkers know, it is hard to preserve a bottle once it has been opened. Eric and his wife were both growing tired of letting expensive bottles go to waste, so the pressure was on for Eric to come up with a solution for their problem.

After doing some thinking, Corti came up with the perfect way to save the freshness of a bottle of wine after it has been opened. To test his idea, he took a blood pressure cuff and took it apart. Then he attached a balloon to it and inserted the new device inside the bottle of wine. By filling the balloon with air he created the perfect seal to remove all access oxygen from the bottle. After his wife tested it and confirmed that the wine stayed fresh long enough for her to finish the entire bottle, the couple made the decision to invest into Eric’s idea so that they could launch a new business together.

Though they did managed to make a few sales on their own, the Cortis ultimately decided that they were going to need help if the Wine Balloon was ever going to establish any real success. So they took their product to the Shark Tank and hoped to make a deal with one of the Sharks. That way they would be able to get the financial backing and marketing connections that their business needs.

Eric Corti entered the Shark Tank seeking $40k in exchange for a 30% stake in his business. After giving the Sharks his offer, he dives into his sales pitch. According to him, there are a lot of people out there who would love to have a glass of wine or two with dinner, but so many decide to pass up on indulging themselves because the rest of the bottle will most likely end up going to waste. Even he and his wife could agree that they have poured a lot more wine down the drain than they have into their wine glasses. The reason for this, he argues, is that all of the wine preservers out there do not do their job properly.

That is where his Wine Balloon comes in. His new way of preserving wine will ensure that any opened bottle of wine will stay fresh long enough for someone to finish the bottle. Eric demonstrates how the product works by inserting the balloon into an opened bottle of wine and he pumps air into it by squeezing the cluster of grapes at the other end of the product. The balloon should be filled up until it touches the inside walls of the glass bottle. It is so airtight that he can even tilt the wine bottle upside down. While doing this, he reveals that only a small little air bubble remains in contact with the wine. And whenever the prospective wine drinker is ready to use the bottle again, all they need to do is twist the little valve on the other end of the Wine Balloon to release the pressure.

Lori Greiner is quick to ask whether or not Eric currently has a patent on this product. Currently it is patent pending, but he hopes that the patent will be accepted soon. Robert Herjavec, on the other hand, wants to have a closer look at the item itself. While Herjavec is testing it out himself, Kevin O’Leary inquires on the type of material that the balloon is made out of. The Wine Balloon is composed of medical grade latex, which has been tested and proved to not change the taste of the wine. In addition to that, it can also preserve the wine for about 3 or 4 days after being opened.

Eric is a man full of ideas who keeps most of his potential inventions written down in a notebook while he’s out doing construction management. So far, this product has been the only one that has come to life and he has invested nearly $65k into it. About 6 months ago they began to sell on a small scale and have since then sold 700 units at $22 dollars retail price. In total, it only costs $6.50 dollars to make, but O’Leary points out that he could be mass producing them for $2.00 each. He decides that he will offer Corti the $40k, but only if he agrees to take his product and sell it to the #1 wine preserver company so that they can collect a royalty on it. However, Greiner has a counteroffer. What she wants to do is to buy him out for $500k.

Corti doesn’t seem so sure about this particular deal, but Mark Cuban chimes in and goes in with Greiner and together they propose a deal of $600k for 100% of his company. Cuban attempts to pressure him into making a hasty decision by telling him that he needs to say yes right now in order to get the deal, but Corti says that he wants a 3% royalty on their sales on top of the $600k. O’Leary applauds him for this, stating that he is “protecting his future”, but both Cuban and Greiner deny him that request. Corti is persistent though, which ultimately pushes Cuban to back out of the offer.

With Cuban out, Greiner decides to switch back over to her original offer. At least until Cuban agrees to go back in with her for $400k instead. Both Daymond John and Herjavec have decided not to invest, which leaves Corti with two offers on the table. With all that pressure going to his head, Eric cracks and decides to sell his entire company to Cuban and Greiner for $400k.

Eric accepted a $400K royalty deal from Grenier and Cuban but it never went through. After the episode aired, he backed out and decided to market the product on his own instead—and it seems to have worked for him.

He was eventually featured in Food Network’s The Kitchen Inventors, a reality show that follows Patrick Raymond and Steve Greenberg as they travel the Midwest in search of some of the country’s greatest kitchen gadgets. And it just so happened that they loved the Wine Balloon. In fact, they loved it so much, that they offered him a partnership, which Eric accepted. Shortly afterward, they changed the product’s name to “The Air Cork.” They also repackaged the item to make it look more appealing on store shelves.

Since then, The Air Cork has become hugely successful. For one thing, it’s now used by various vineyards and wineries across the country. Not only that but it’s sold in various retail stores as well (you can apply to become a retailer on their official website).

Of course, you can also get it from their official website. Currently, there are three colors available: charcoal, white, and burgundy. There’s also a barrel-shaped version that works exactly the same way and all of them come with a gift box and branded storage bag. All of them go for $28.50 plus tax and they come with free shipping within the US if you purchase more than two. A pack of three spare balloons will also be included with each other. Flat-rate international shipping is also available for overseas customers (the total amount will be calculated during checkout).

Amazon is another option. Currently, they have a 4-star rating across more than 700 reviews. Looking at some of the reviews, most people seem to agree that it works well in preserving wine. With that said, some people have run into issues where the balloon would deflate after a few hours. Still, the general consensus seems positive.

In terms of sales, the company made $7 million in 2021, which is a huge jump from when they were on the show (the company was valued at $133,333 during the pitch). As for Eric Corti, he currently has an estimated net worth of $14 million.