Doctors are warning that onslaughts of loud noise at a steady rate are damaging an entire generation, particularly the generation known to always be wearing earbuds. The World Health Organization is warning that over 1.1 billion young people, such as the millennials, are at a risk of long-term hearing loss because of personal audio devices and ear buds. Noise levels at other events like concerts can reach 120 decibels for hours on end, and all of this loud noise is going to be harming young people for years to come. 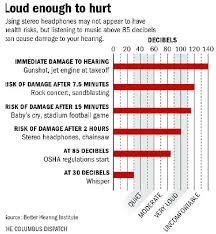 Ear, Nose, and Throat specialists are saying that the largest cause of ear damage and hearing loss in the millennial generation is iPods and smartphones, since most young people wear ear buds with their devices for hours at a time. The hearing loss of today’s teenage population is about 30 percent higher than it was for the teenagers in the 1980s and 1990s, which is largely due to the smartphones that have hours of battery life to create hours of entertainment for young people. Even if young people feel fine and can hear good now, it will definitely be leading to this generation facing hearing loss at a younger age than generations in the past. Doctors are advising young people to stop wearing the headphones, specifically ear buds, because ear buds are putting the noise dangerously close to the ear drum, and this increases volume up to 9 decibels.

The National Institutes of Health has also said repeated exposure to sounds over 85 decibels can cause significant hearing loss, and permanent damage could be done within just a few minutes, and that is irreversible. There is also more tinnitus being diagnosed than before, with people in their early teens coming down with this condition, and this is one of the earliest signs of hearing loss. Most of the time though, the tinnitus is not found until someone is in their 20s or 30s, and by this time, even more damage has been done through the loud music. A 2014 study showed that nerve synapses are more vulnerable to damage than the hair cells that are found in the inner ear, and even just one exposure to loud music can really accelerate hearing loss later in life. The hair cells and the neurons could be injured within just a couple of minutes of exposure, and this hearing loss is permanent, even if it is not symptomatic until years later. Most symptoms go away within hours of exposure, which is why so many people do not believe they did permanent damage to their ear drums, and it is hidden hearing loss that most audio-screening tests cannot pick up due to lack of advances in screening technology.

The best thing to do is replace your ear buds with regular over-the-ear headphones, and apply the 60/60 rule. This rule is all about keeping the volume under 60 percent of the maximum volume, and only listen to a maximum of 60 minutes a day of music. You want to use headphones that cover outside noises so that you do not have to turn the volume up louder when you are in a public place where there can be a lot of noise. Small children should be wearing ear protection when they are in loud venues, such as concerts or sporting events, and children should be monitored when it comes to how long they are listening to music. There are also parental controls that will allow you to set the volume of the smartphone or other device, which can help parents keep children in a healthy range in terms of loudness and exposure.

In terms of what the millennial generation can do so they won’t be one of the ones experiencing hearing loss at a young age, just keep it down, and make sure you are not using ear buds. While a lot of people like ear buds because it doesn’t look as bad, allows you to keep your hair in check, and it is stylish, these are actually the worst types of headphones that you can be wearing in terms of your health. If you own a pair of ear buds, you need to be throwing them away and getting a good over-the-ear pair of headphones that have a noise-canceling feature to them. Doctors warn if the millennials don’t stop wearing ear buds, then they will be facing extensive hearing loss in the very near future.