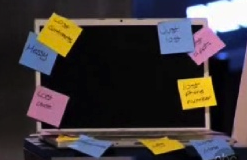 The Sticky Note Holder was created by Mary Simonson. Mary knew sticky notes would get lost and were unorganized when attached to a computer so she created a product that would attach to the side of the computer so the sticky notes would stay there. Mary had no sales before entering the tank, similar to many entrepreneurs from the first season. She invested $1,000 in her idea and went into the Tank in season one hoping to get a patent and her product to market.

Mary entered the tank seeing $100,000 for %20. Mary began demonstrating the product by attaching it a 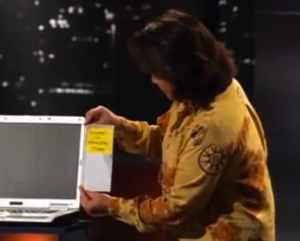 computer, but right after Kevin O’Leary asked her why this idea had a $500,000 valuation.  Mary demonstrated that the holder would slide into a laptop when closed and Kevin O’Leary joked about how that would justify the valuation. He then teased Mary saying she should keep this idea a secret as Mary mentioned she had no sales. After hearing the price would be $9.50, Kevin O’Leary became even more upset feeling no one would pay that. Mary tried to defend her price point by surveys she had done, but Kevin O’Leary still went out stating that there were so many bad things about the product. Robert asked her why the idea “wasn’t the worst” he’d ever seen and Mary tried to defend it by the amount of laptops that would be sold that year. As one would learn in future episodes, using this as a reason to invest always upset the Sharks, including Robert in this episode, as it would never explain how one would capture any percent of the market. Daymond was next to mention that he did not have the problem that Mary was trying to solve and Kevin Harrington became upset after hearing Mary had not spoken to anyone about selling the product. Daymond told her she shouldn’t waste money on a patent and went out. Kevin Harrington was next to go out, although he mentioned he might of considered the idea if Mary had proven interest from retailers. Barbara was the only who felt Mary had a decent idea and felt that Mary may able to sell it at a $10.00 price on television such as QVC. Although Barbara liked Mary, she didn’t feel The Sticky Note Holder could become a business and went out. Barbara’s feedback immediately upset many of the Sharks including Robert who said biased feedback like Barbara’s is what leads to people making bad decisions. Robert advised Mary that she shouldn’t continue with the idea and went out as well. 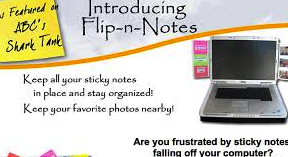 Since airing on the show, The Sticky Note Holder has constantly been included in the group of “worst Shark Tank products” especially by Robert who specifically mentioned it as the worst idea on the show. Despite this, Mary has changed the name of her product to “Flip-N-Note” and has a website that demonstrates the product. From the negative feedback and her website, however, it appears that Mary has not gotten any sales as one cannot buy the product directly from the site and it mentions that she is still looking for investors. Both Kevin Harrington and Barbara saw merit in Mary’s idea so had she come in with a better pitch or sales to prove people needed this product, she may have at least gotten better feedback. It appears Mary has not quit on the idea, however, despite airing almost five years ago. With constant re-runs of her episode on CNBC, there is a small chance that the idea can take off in the future.

How can I buy the product?

You can visit http://www.attachnoted.com to find Mary’s contact information and learn if she is selling the product. It is not available directly from her website.

Mary appears to have no sales to date.

The Sharks and most viewers have given Mary negative feedback because of the argument that Mary is solving a problem that doesn’t exist. There are no reviews of anyone actually using the product.