What Happened to Atari? Learn Why They Stopped Making Video Game Systems 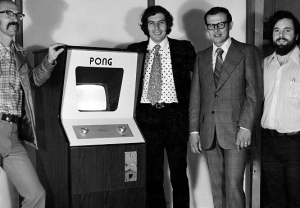 While today the level of video games played by consumers is far greater than the dawn of video games in 1972, the classics are still fan favorites. These classics include but are not exclusive to Pong, Pac Man, and Missile Command. The pinnacle of gaming in the ‘70s, the original video gaming companies that existed at the time were tapping into an unexplored area of digital entertainment with the biggest contenders being Nintendo, Atari, and many others. While Nintendo is still striving, and generally succeeding, to create new titles that fans want to play while simultaneously innovating the console market with the Wii, Atari seems to be missing from mainstream gaming consoles and titles. Where did Atari disappear to and who actually still remembers Atari.

A little history lesson for all the people born after 1985. Atari was one of the first video gaming companies devoted to creating arcade titles for domestic use in homes. Created by Nolan Bushnell and Ted Dabney in 1972, Bushnell and Dabney hired Al Alcorn as their first developer. Eager to test their new employee, Bushnell tasked Alcorn with developing a piece of work showcasing his skills. The result was the time old classic, tennis style game, Pong. Surprised by Alcorn’s skill and creation of Pong, Bushnell and Dabney decided to manufacture Pong which when on to be a large commercial success: branching from arcade machines to a household console of Pong in 1975, Pong was a household classic title that spawned many remakes and copies. However the success of Atari’s hit classic was met with turmoil when they were sued by the creators of the Magnavox Odyssey claiming that Pong was a knock off of a tennis game in found in the Magnavox Odyssey.

After the large success exhibited by Alcorn’s practice test, Atari went on to develop a console that can play all of Atari’s current gaming titles named Atari 2600. Bushnell knew that he had a potential smash hit on his hands but felt that marketing the Atari 2600 would be far too expensive. Bushnell then sold Atari to Warner Communications as a way to fund the Atari 2600 with external cash flow. However the relationship betwixt Bushnell and Warner was a sour one with the two constantly fighting over the direction of the company. These arguments ultimately resulted in Bushnell being fired in 1978 despite Bushnell claiming that he quit. Regardless of what transpired, it was a mutual separation according to Bushnell.

The Atari team, now lead by Warner Communications, now were in search of a successor for their Atari 2600 estimating that the lifespan of the Atari 2600 was about 3 years. Deciding to stake their claim in the new 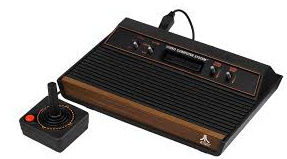 field of home computers creating their Atari 800 and 400, both being equipped with a keyboard, yet they were not as successful as the Apple II. Unfortunately Atari faced overwhelmingly fierce competition in the home computer and gaming console markets destined to never repeat the success of the Atari 2600. To add to the lack of success, the video game crash of 1983 forced Warner Communications to try to find a buyer of the Atari video game division. Finally finding a seller under new executives, the computer and gaming division of Atari was sold to Tamriel Technology in 1984.

Tamriel Technology went on to create a slew of consoles such as the Atari ST which stands for Sixteen/Thirty-two which was the machines 16 bit bus and 32 bit processor. The next console in the line of systems was the Atari 65XE of the XE series with the following year releasing of the Atari 130X. Finally they then released two consoles under Warner Communications which were Atari2600jr and the Atari 7800 causing Atari to rebound and make a $25 million dollar profit. In 1989 Atari released the Atari Lynx, a handheld colored display to much fanfare. Unfortunately, Nintendo’s Game Boy outsold the lynx despite having only black and white display due to the price being cheaper. By the mid ‘90s, Atari had been through numerous successful lawsuits which left Atari with millions of dollars but no product to back. In 1996 Atari merged with JTS Inc although short lived as Atari’s name was sold to Hasbro.

But even this new ownership would be short lived as the Atari name was then sold to Infogramers, a French company in 2000. Thankfully, Atari still is owned by Infogramers so the selling of the old school company is over. In June of 2014, Atari had announced that their chief focus would focus solely on new audiences including LGBT, social casinos, real-money gambling, and even YouTube.

As anyone can see, Atari has had a very rocky and turbulent history since their origin in the ‘70s. Whether it was change in ownership to lackluster unselling consoles, Atari was still able to hold true and prevail and

never go under. While they aren’t making new consoles or new classic hits, they are still attempting to thrive as part of Infogramers. However the console legacy left by Atari in the 20th century has been overshadowed by modern new age consoles like the PS4 and Xbox One. When people think of classic consoles, all minds jump to successful consoles like the Nintendo 64 and the Playstation 2. With the current gaming generation being so accustomed to a Sony, Microsoft, or Nintendo console, the old school consoles and games are being overshadowed thus diminishing the monumental legacy left by these classic companies.

Despite the downfall of Atari’s mainstream success, they still had an influential impact on the early gaming scene in the form of time old classics such as Pong. Even if Atari isn’t focusing solely on making new gaming consoles or computer systems, they still are attempting to focus on specific markets in order to sell for widespread success. Hopefully they will find success as they have had a rocky history just barely scraping by. And if they stay a part of Infogramers, they can focus on their current ideas and concepts as they won’t have to worry about funding and staying afloat. I feel Atari deserves that much as a pioneer of video games and computers.