Nail Pak was created by Barbara Lampugnale to eliminate the hassle of buying so many different products to do one’s nails. The idea came to her when she and her six daughters were doing their nails one night as she experienced the difficulty mentioned above. To solve this issue, Barbara created a product that contained all of the items needed together in one package such as the nail polish remover and the pads. She called her company “Duality Cosmetics.”

Barbara had the background to invest a lot of money in the idea, something a lot of Shark Tank entrepreneur’s lack. However, she was not able to get distribution before coming on the show as she spent a lot of her time tuning other areas such as applying for a patent and creating inventory. Hoping to grow her idea, Barbara applied to be on Shark Tank and was invited for season three.

Barbara entered the Tank seeing $50,000 for 20%. Barbara demonstrated the aggravation that may come when girls paint their nails by showing the Sharks all the required items and then presenting them with her small package which carried everything the consumer needed. She also told the Sharks how she came up with the idea and that she had a patent pending before handing out samples.

Robert asked for the numbers and Barbara mentioned it cost her $3.00 to make, but sold for $15.00. She also stated she had invested $300,000 which shocked all the Sharks. Mark was interested in where she got the money. Barbara told the Sharks that she saved it up with her husband from his success in real estate before the economy went south and that there were no outside investors. Although Robert saw the dedication by the amount of money invested, he didn’t feel he could help Barbara sell the product and went out. Mark also mentioned the difficulty of turning the product into a real company as Barbara was the only one currently involved and felt he couldn’t add the value she needed so he also went out.

Kevin loved the margins, but was concerned on how Barbara would get distribution. Kevin turned to Lori, knowing that she could get the product on QVC which would solve this issue. Because of this, Kevin mentioned he would be willing to invest if Lori went in with him. Lori quickly addressed what value Kevin would bring if she put the product on QVC. Kevin said there would be less risk for Lori if he went in as well, but Lori didn’t buy it. In love with the product and feeling she could sell millions, Lori offered Barbara $50,000 for 51% which would give Lori control of the company.

Kevin was eager to bid Lori down because she did not let him go in with her so he made Barbara an offer of $50,000 for 40%. Robert mentioned that Lori brought more value even though she was taking control, but Kevin said he could go to one of Lori’s competitors and bring the value she does. Kevin also tried to bring Daymond in on his deal as he brought value in the retail space. Daymond seemed interested and mentioned that they wouldn’t need the shopping channels anyway as they could license the product. Lori quickly jumped in, selling Barbara on her experience in shopping channel networks and mentioned how a majority who try to come on end up failing. 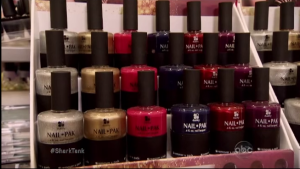 After some more insults between Daymond and Lori, Barbara countered Lori with $50,000 for 40%. Lori thought for a moment and said she would do that deal and get the product onto QVC within months. Kevin tried to tell Barbara not to take the offer, but seeing value in Lori, Barbara accepted Lori’s new offer. Robert congratulated Lori and Barbara  and felt that Lori outplayed Kevin, but Kevin mentioned that he got Lori to come down to his equity ask which was his intent.

The deal between Lori and Barbara closed after Shark Tank and Lori was able to get the product on QVC. It was a very successful turnout as the product did sell out and had gotten very positive reviews on QVC’s website. Lori and Barbara had already done nearly $750,000 in sales before their Shark Tank update. Lori also introduced Barbara to Ulta Beauty, a major retailer. After marketing her product to Ulta Beauty similar to how she did the Sharks, Ulta Beauty agreed to carry it in their retail stores and online. Barbara and Lori went into an UltaBeauty store six weeks later to see the product on the shelves which made both of them very happy.

Despite this huge success and what seemed to be the start of a growing company, it appears the Nail Pak has actually gone downhill over the last couple years. Barbara’s website, Duality Cosmetics, is currently down, QVC and UltaBeauty no longer sell the product, and it seems that no other outlets sell it online. The company’s Facebook tried to sell eager customers that “exciting things are happening with the product” and that they would be back in spring of 2015, but that did not happen.

Many believe Duality Cosmetics went out of business with reasons including low quality nail polish or perhaps a bigger player buying them out. There is no confirmed source as to what happened to Barbara or the company. This is a shock because the deal closed and it appeared Lori was heavily dedicated to growing the company so if something did go wrong with the company, she would have likely tried to save it. Despite the company going out of business, it is likely that Lori still profited from her deal as she had only put in $50,000 and got the product to reach massive sales before this mystery disappearance.

Nail Pak is a good example of the hundreds of things that take place even after a deal successfully closes. Although many deals appear to be extremely successful, the growing company will face challenges along the way and sometimes overcoming those challenges will be too difficult even with a Shark on board. Although it does not look bright for Duality Cosmetics, Barbara’s can still say she invented a great product while Lori demonstrated the heavy value she brings which many future Shark Tank entrepreneurs learned from their long-term successful deals with her.