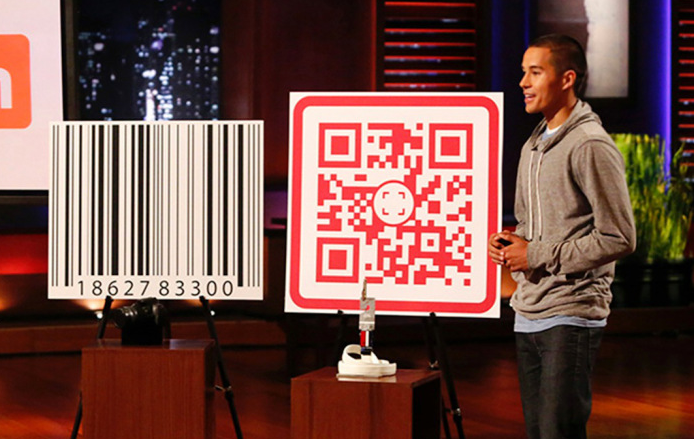 Scan was founded by Garrett Gee as he wanted to create an App that would be in the top ten list of downloads. Garrett was introduced to QR (quick response) codes after he saw one on a product back in 2009 and scanned it. Although he enjoyed the technology, he felt it could be improved so he set out to do this with his classmates Kirk Ouimet and Ben Turley.

The first step Garrett and his classmates took was to secure the scan.me domain name which quickly started to get attraction. Like any business that wants to grow, Garrett needed an investment, but unlike many others who come on Shark Tank, he was looking for investors before he even applied to be on the show. With his great idea and execution skills, Garrett was able to raise over $8,000,000 before coming on the show from investors such as Google Ventures. As these investors came in, Garrett learned that they offer so much along with the money and felt he was getting a big return for the little equity he was providing them. With this mindset and wanting to continue the growth, Garrett applied to be on Shark Tank and was invited for season five.

Garrett Gee entered the Tank seeking $1,000,000 for 5% of the company. Garrett began by explaining how common QR codes are on products and demonstrated how his app allows users to easily scan the code to find more information about the product. Garrett pointed out that businesses could go to his company’s website to create QR codes for their products and program what would appear after a code is scanned such as an option to buy the product or the company’s social media page. Robert was the first to ask what Garrett had available today and he told them about the mobile app that was free with premium features one could pay for. Garrett also showed the Sharks that the free app had over 51,000,000 downloads and that over 27,000,000 people scanned something last year although Cuban felt the total downloads did not mean much. Lori was the first to ask about competition and Garrett mentioned that although this idea wasn’t new, he felt he was executing it better than his competitors with the features he offered to both the companies and the users.

Kevin finally asked his patented question of how he could make money and Garrett mentioned that the revenue would start coming in from the companies who come to his website while the user side would mostly stay free; however, Garrett did not have much revenue yet. Mark addressed his concern of QR codes becoming nonexistent as technology grows. Garrett addressed this concern by showing the Sharks glasses Google sent him that would allow a user to directly scan a product with the glasses and that products like these allow users to easily interact. Mark was still not impressed, however, as he didn’t see anything unique in Garrett’s business.

Garrett also brought up how he raised $8,700,000 to date and how watching Shark Tank helped him with raising capital as he learned about investing. Despite his impressive story and background, Daymond felt Garrett didn’t need the Sharks and stated that the Tank was more for people who needed financial help unlike Garrett so he went out. Lori was the next to go out as she didn’t feel she could get Garrett in this field. Robert was the next to mention that he loved Garrett’s story and downloads, but was worried about competition and went out. Kevin was the only one questioning the valuation as Garrett had yet to make a profit and went out after mentioning that Garrett should have shown him the money, not the downloads.

Mark was the only went left and Garrett tried to sell himself again by mentioning that investors who just look at the numbers and business model were not understanding what the company was and felt that being a little foolish and taking some risks had gotten him here. Despite this, Mark felt that technology was moving toward sensors because sensors would not require users to interact while QR codes and Google glasses do require users to interact. Because Garrett’s business did match Mark vision of the future of technology, Mark went out.

Despite not getting an investment and the Sharks concerns, Scan continued to grow after Shark Tank. The company currently has a free app called “QR Code Reader” and also a premium paid version called “Scan” which can be found on Google Play. Like all companies that come on the show, the Shark Tank effect helped Garrett get more users as people were actually scanning the QR code on the show while watching it on TV! It appears companies can still go to the Scan website create QR codes. However, the website and Scan’s social media pages have not been updated recently so Mark’s argument of QR codes dying out may be true.

Garrett is a great example of skills needed to become a successful entrepreneur especially when you are dealing in a business with heavy competition. Despite not having anything proprietary, he and his friends were able to raise capital and figure out flaws that the competition did not catch which requires good judgment and calculated risk. It is very rare to see this especially considering how young Garrett was when he started and these skills and dedication have allowed Garrett’s business to stay successful.

Where can I buy this service?

You can download the “QR Code Reader” App or the “Scan” App in the App Store with the latter having a fee . You can go to the Scan.me website if you want to implement QR codes on your product.

Both the Apps have positive reviews as users are satisfied with the speed and the claims the Apps make.