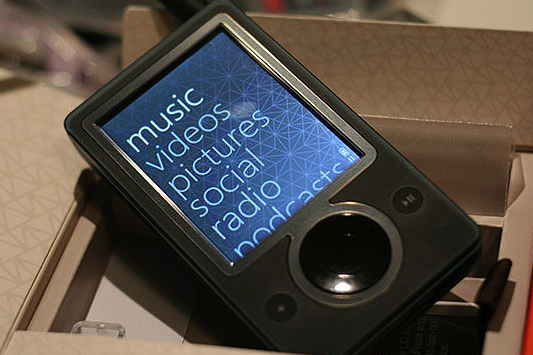 One of these advancements in dire need to strive for success was Microsoft Corporation (NASDAQ:MSFT)’s Zune series. The creation of the first generation Zune was developed by Microsoft in close cooperation with Toshiba to develop a mobile media device that would offer users the ability to take media such as music on the go while also having a large access to music libraries while being connected through all of their Microsoft platforms. While the Zune media players did have some heavy competition in the form of Ipods developed by Apple, the Zune media player and Zune music service unfortunately fell of the technological scene with no one seeing it nor caring.

The aforementioned first generation Zune was Microsoft’s first attempt at mobile media devices, and with firsts comes issues and bugs to be fixed in later updates or versions. With that being said the Zune was met with a high level of scrutiny and criticism mainly derived from the Zune’s appearance: the first Zune was a brown color and rather bulky in comparison to Apple’s iPod. CNET had regarded the Zune as a,”high-profile underdog alternative to Apple’s iPod.” Despite this level of criticism and somewhat minimal praise, the Zune was still more successful than the failed attempts set forth by Samsung, iRiver, and other Windows media MP3 players. In addition to criticism the Zune received there was also another snafu that occurred in December of 2008 where all of the Zune 30 models froze for 24 hours. This was caused by how the internal clock handled the leap year. 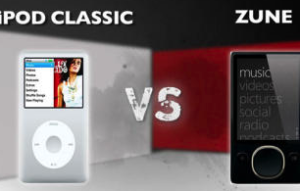 largest media players on the market. The Zune 16 and 120 were released in September of 2008 in accordance with Zune 3.0 software update. Adding things like audiobook support, Texas Hold’ em, and Hexic, Microsoft added more functionality to the Zune that transformed the Zune from its predecessors. Most notably however is the ability to purchase songs from the Zune marketplace due to the usage of mobile hotspots located in places like McDonald’s. The third generation Zune, while improving the image of Zune itself and implementing more and more features, it just could not compete with Apple’s iPod products.

Finally, the fourth and final time. Like the aforementioned release of Zune 3.0, the fourth generation Zune was released the same day as the Zune 4.0 update. With the update bringing music streaming on PC for Zune Pass subscribers. As far as Zune devices, none of the fourth generation Zune devices stood out. With a lack of cutting edge competition needed to survive in the mobile media scene, Zune fell off the tech scene.

In 2011, Microsoft officially announced the discontinuation of Zune production. While previous Zunes can and will be sold, Microsoft will not develop a new Zune device. This decision was a smart one for Microsoft as that left the mobile media device scene before their losses grew too large. In all of the Zune’s life span, from generation one to four, it just could not compete with its competitors. In addition to the Zune’s inept 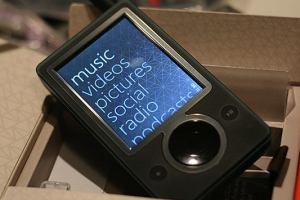 ability to compete with its competitors, by 2011 when Microsoft announced the end of Zune, Apple had completely dominated the competition becoming the forefront for mobile media devices remaining until this day. Quite simply the Zune device line could not over take the tremendous success that Apple was garnering cause Microsoft to pull out on the Zune and cut their losses to work on bigger and better things like the Xbox One.

Despite today Apple is still the forefront for mobile media devices, the Zune product line still had its own flair. With consistent innovation and care for each Zune model, Microsoft amassed a mobile device that many favored, but unfortunately not enough. Even though Microsoft was unable to dominate the competition like Apple, they still were successful in a relatively new field of technology and innovation, and sometimes you win some and you lose some. As far as the Zune is concerned, Microsoft had some mediocre wins throughout its lifespan but lost the overall war with Apple and other big name mobile media device companies. Thankfully that allowed Microsoft to focus on their other products that fans love such as the Xbox 360 and Xbox One. Who knows, had the Zune been more successful, we all may have Zune Phones rather than iPhones and Samsungs.